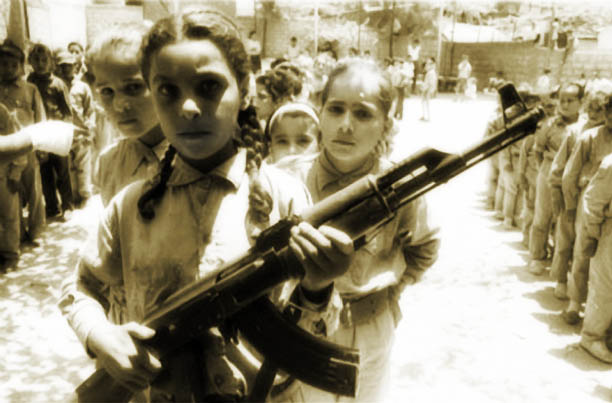 … And whoever controls the debt, controls everything. This is the essence of the banking industry to make us all slaves to the debt.

I have lived long enough to witness the fabrication of the greatest lie ever sold: “Reality TV.” What’s his name, Orwell, is doing a triple Salchow as I write.

Of all the shackles we willingly wear, two of the most powerful are those of spectacle and illusion. The chains we wear today are expensive; they bear names like Coach, Hilfiger, and Chanel. That our ancestors fought to rid themselves of the brands we so readily accept (and pay huge sums for), has to be one of the greatest and tragic of ironies. What difference does it make whether your chains are made of iron or gold?

Chains are expensive, as are surveillance tools and armed guards. A less expensive, more efficient strategy is to keep the slave entertained. Sublimation is the best cure for rebellion. Give them something inconsequential to think about or a dream that leads to a dead end.

I love sports, but I also know that sports as spectacle are perfect for these ends. More people will watch the Superbowl than an election. Shit, Ferdinand Marcos distracted a whole revolutionary movement in the Philippines by hosting the Thrilla in Manila, the epic battle between Joe Frazier and Muhammad Ali.

And while even the Romans understood sports as good distractions, we all know sex is better. Movies, celebrations, mud-slinging elections, or even a grisly string of murders are excellent distractions that work to pacify the masses.

All the while, you’re paying for gaudy trinkets embedded with the names of your masters, and for the most part they are nothing but the modern equivalent of shackles.

There are currently at least 30 wars and armed conflicts raging in the world… over 80% of the casualties of war are civilians… disproportionately women and children.

As we lurch toward the end of the first decade of the new millennium, I can’t help but reflect in amazement how we’ve been at it for all these thousands of years and we’re still here in spite of ourselves. Through the cruel elements, the countless plagues and wars, the madmen, and perhaps human nature itself, we are still here, defiant, striving, still trying to make sense of it all. We’re still alive…

But we’re still suffering and killing and hating each other. Diplomacy has risen to an art form because we have become masters of the art of war. I wake up today with the realization that we have defeated the democratic process and in its place we have put an economic system that depraves our efforts in order to create riches based on a subculture of poverty and crime, a system any other creature would rightfully see as barbaric.

We believe ourselves to be the most advanced species but we demonstrate very little understanding or respect for our bodies or the world we inhabit.

For over a hundred years, the practice of slavery has been outlawed here in El Norte, but people still slave. Technology has taken us to outer space, but not before we managed to eradicate millions in search of genetic purity; not before one of our greatest technological projects, harnessing the power of the atom, incinerated tens of thousands of innocent men, women, and children to shadows.

We wear the restraints of capitalism, the corruption of ideals, and our hatred, prejudice, and ignorance like gaudy shackles.

Our capacity for moral reasoning hasn’t caught up with our technological advances. On the richest nation on the planet, we have the power to end starvation, but children still go hungry. We celebrate our medical advances, but the medicines that slow the progress of AIDS are nowhere to be found as that very plague decimates the entire African continent. Our thinking gets the better of our actions. But before you begin to lay blame, please know that our actions are not truly ours to command. At least not any longer…

Today decisions are made by governments and the corporations that own them and are designed to increase profit, not to advance humanitarian ends. Children are starving because it has nothing to do with the bottom line. People are dying everywhere, but how can you try an international cartel for murder?

I awaken and I am appalled at the lack of moral responsibility and leadership. We all know something’s wrong, but we can’t seem to change because we’ve been hoodwinked — we’ve all been chained and made into property.

Reality TV is our pacifier and money is our drug of choice — the one habit we can’t kick without dying in the process. Money also forms the links that create our shackles. Our labor binds us to systems that see us only as units of value or expense.

And in this way we careen toward a future like a runaway train whose conductor and engineer have slain one another, its passengers blissfully unaware. Our lives are designed to maintain the values of our economy. A pound of coffee, an ounce of lead, a human life — all these things express value in our world. Not human values but the values of the system that rules us. We drag along these values subserviently accepting their consequences: wars, the laws that maintain order (and their prisons), the weapons of mass destruction, and the perceived need for world dominance.

Through all this, we are told that there awaits a pot of gold at the end of the rainbow. But we know deep down inside that we’ll have to pay in sweat, blood, and sacrifice — our sacrifice alone — for such a future. Yes, dear friends, the future may be bright, but we will be the beasts of burden hauling around the necessities to maintain that brilliance.

I wake up today and I am overcome by an overwhelming sense that nothing will save the masses from this tragic fate.

Unless we free ourselves from the archaic chains of ignorance of the past two-hundred years or more. In order to free ourselves we must stop fooling ourselves into continuing to believe that our chains are jewelry. We must begin to consider the nature of our chains. Understanding something about how we became enslaved (again) might allow us the ability break free of those chains. Once freed, we might bring on a new consciousness that will help us realize that the dreams we had for a bright future pale in comparison to the reality that lies quiescent within each and every one of us.

I had hoped that the latest economic devastation would have forced white working-class Americans to stop heeding the demagoguery of right-wing talk show hosts; that they will come to realize that they too are pawns of the insanity of mass oppression for mass production. This current economic mess, brought upon by decades of conservative ideology, will not just go away. This is not an economic hiccup.

I had dreamed that maybe this reiteration of the economic spiral would have made it harder to separate people of color from whites, as we all endure the hardships. I reasoned that even if people refused to see (or admit) the fact that we’re all in the same boat, they would have realized that a hard reality has come knocking. I thought that maybe, finally, as we all suffer from the economic shit storm, people would be less prone to heed the propaganda of racial superiority. I have to resign myself to the fact that this hasn’t happened. The class nut will be hardest to break, but we’ll never get anywhere near that bridge until we address the racial nut.

While the runaway juggernaut of capitalism may not extract its pound of flesh in an equal opportunity manner, it does extract it from all of us. It is the nature of capitalism to apply its value system to everything. Within this system, all values are interchangeable. Not only are these values interchangeable, but they also rise and fall according to market forces. Your whole sense of identity and belonging can come tumbling down the moment the cost of a barrel of crude oil, for example, skyrockets. Price competition could well affect the cost of production and one of the major production costs is labor — your labor. In this way, the value of life itself rises and falls according to the cost of production.

Contrary to what the well-fed and groomed media lap dogs tell you, the economic system that rules so much of our lives cannot value human labor above any other commodity or resource. Under the crushing weight of this system, your humanity is no more valuable than its equivalent cost of a sack of potatoes. Capitalism has no humanity, something even the talking heads admit even while they tell you it’s the ultimate solution to all social ills. All that exists in the capitalist bible is the margin of profit, the market share. We are all part of the machine, and those elements — those idiosyncrasies of individualism — must be dealt with in the same way any mechanic deals with a “faulty” part: removal or replacement.

We are all part of an economic machine. Some of us are cogs, others ghosts, but it is a machine, not our differences, that drive us.

Whites are now beginning to experience what people of color have been experiencing for centuries and my hope was that, as they experienced alienation and isolation from the full participation of the democratic process, they would begin to learn what it feels to be marginalized and in that way, we can all somehow create a coalition founded on our common experiences. Unfortunately, those that control the debt have managed to turn this opportunity to come together as never before into yet another strategy for hate.

As whites, you might feel identification with groups or power, but what does that identification mean on the unemployment line or when an HMO refuses you the luxury of life-saving technology?

In our current reality, we are all a unit of labor. Sure, each individual may use his or her labor as he or she wishes, but in most cases, this power is extremely limited. Make no mistake: the advantage of supply and demand is in the favor of the haves, not the have-nots. While this is indeed depressing, I took heart in the hopes that the experience that could have marshaled a new era — a new consciousness — in our shared history.

The history of African Americans and other people of color is an integral and important part of the history of the United States. Rebellion, it is said, is the essential movement of understanding. Violence and oppression rob us of the ability to understand. Without understanding, there can be no growth, no appreciation of truth, and no tomorrow — only a never-ending repetition of the daily act of humiliation that has become definition of our existence.

You may deem my words depressing, but I say that there can be no healing until recognition of the disease has advanced. With that, we are well on our way. I also realize that some of you despair that there aren’t enough of us, that the machine will chew us like so much grist for the mill. My first response is almost theoretical: allow me to point you to the power of karma properly contextualized. Your actions, no matter how seemingly insignificant, fan out, creating psychic ripples of consequences and reactions. My second response is pragmatic. For those who would despair, I leave you with the following knowledge passed down to us by the great anthropologist Margaret Meade:

“Never doubt that a small group of thoughtful, committed citizens can change the world. Indeed, it is the only thing that ever has.”

16 thoughts on “The Ties That Bind Us”