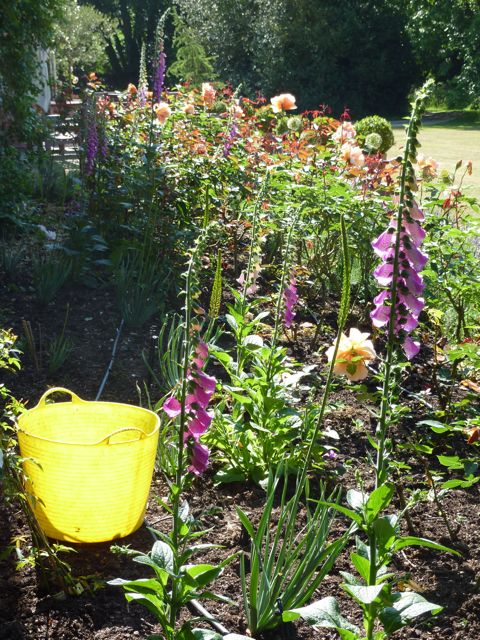 It’s been a long time since I’ve been here, in the garden. It’s not even a thirty second walk out the back door but I haven’t had the time. It’s one of life’s cruelest catch-22; you soldier forth to make a life for yourself then when you stop for the briefest of moments, you realize life has passed you by. Gardening is not just a hobby; it’s a metaphor about life, when you think about it. You have to prepare a garden, plan what you want, plant then tend to it by weeding it, watering and protecting it so that what you want in the end comes out with the richest of flavours and colour. There was a time that the shovel’s metal would be gingerly devoured by the dirt, turning over as smooth as mixing flour and sugar to make some buns to go with the greens that you just pulled out for supper. The garden made the yard fragrant with herbal aromas, I remember just sitting back on my knees and breathing in that air after weeding with closed eyes and a big smile on my face.

Just look at my garden now, the dirt is hard, cracked, with only the heartiest of weeds being able to withstand the lack of care that it had been left so. I had asked them to take care of the garden when I went away, they said they would, but I guess like me it got lost in the day to day goings on. Ten years is a long time to hope for someone to do anything, I suppose. Even my Jeffery couldn’t keep his promises for ten years.

I remember in my younger days how much the neighbours were jealous of how well my garden looked; year after year I would win those “best of” prizes for whatever I planted in that soil. People would always ask me how I managed such a bounty; I would always smile and tell them that it was all in the fertilizer. That’s not a lie, that the trick to a good garden is the fertilizer, the choice you make for those seeds to rest in sets the stage for how well they will thrive when they poke themselves out of the dirt to reach for the sun. People would ask what kind of fertilizer I used, but I would never say, I would just wink and tell them it was my own personal recipe.

The truth is that I didn’t expect my garden to blossom so, goodness no! At first I didn’t have even a hope that anything would grow, considering the fertilizer I used. I think it was a gift from God that made the garden grow and thrive as it did. It was His way of rewarding me for passing the cruelest tests of my faith that he had arranged for me; the betrayal of my sweet Jeffery.

I came across the winning recipe for my fertilizer quite by accident; I remember that night as clear as a bell, that end of March night that I came home and found Jeffery acting like he was a woman, down on all fours, while that filthy queer was being the man. They stopped when they saw me standing there in the doorway, Jeffery getting up and saying sorry over and over again, but I knew he didn’t mean it – he had a smirk on his face that matched the one that filthy queer had on as he didn’t even have the decency to cover himself or the pride he had in his befoulment of my Jeffery with his hard standing still swaggering.

I think Jeffery thought that I would just sit down and cry; following me into the kitchen while he was trying to get some pants on with his empty sorrys. My Jeffery, my man, huffing and moaning like that, it was disgusting to see; how could he do that to me? He acting like that, well that was like I had been sleeping with another woman – that queer had not only tainted my Jeffery, but me. Jeffery didn’t even scream when I pulled out our butcher knife and made him be quiet. The queer screamed and tried to run like a woman when I came for him though; he wasn’t such a big man when I got through with him.

I must have stood there in the bedroom with that filthy creature for most of the night, until the redness had sloughed off the blade of the knife, mad as a wet hen without an inkling of what to do. I went back to the kitchen, trying to remember my Jeffery when he was a man and what he’d do with this type of garbage. I looked out the window and as if God was showing me the way, the moonlight sparkled on the frost dirt crests of the garden.

I remember how good the potatoes from the garden had tasted that year, firm and large, where the queer had been put. The sweet peas that had fed on Jeffery didn’t fare so well, I suppose even in death Jeffery was a disappointment. It seems funny that how terrible those queers are in life, in death they have can add such a richness to one’s goals in gardening.

There were some turns in the road, of course – there always is when you’re trying something new, but over the next three years I learned so much. Getting the fertilizer wasn’t hard. I suppose it was the only good thing that Jeffery really left me, his little black book that I had found hidden deep in his underwear drawer, with the names and numbers of queers that he knew and an address to the queer bar. I found that just two will do a garden nicely; just like they spread their foulness to my Jeffery, they seem to spread well out in a garden as they are doing the only job they’re good for.

It is crucial to remove all the apparel – roots cannot easily puncture the material and get into the meat of the fertilizer. A sledge hammer is handy to break the rib cage; nothing spoils the thoughts of a good potato salad than having potatoes ripped up by bone if they germinate in the chest cavity. The fresher you get the fertilizer in the ground, like when their still seeping their dirty lives away, the better the seeds seem to take. Maybe it’s because of the way the fertilizer warms the ground for a couple of hours that makes all the difference, I can’t be sure about that. I made the mistake of trying to fertilize the garden when it was too fresh and it just plain old got up and ran away.

I fibbed; my Jeffery did leave me another gift: a concrete mixer. That nasty prosecutor called my gardening murder at first, but after they didn’t find the used up fertilizer in my garden, they called it attempted manslaughter. None of those gentlemen had been gardeners, or they would have known that you take out all the rocks and hard stuff from the soil so it doesn’t harm the roots the next year. I thought it was justice that when those queers use had been used up, that I could show them that they were still beneath me as I walked on the sidewalk path to the garden. Still, they took me away from my home.

How I’ve missed gardening so.

By: Neonorth- Gardening is not just a hobby; it’s a metaphor about life, when you think about it. You have to prepare a garden, plan what you want, plant then tend to it by weeding it, watering and protecting it so that what you want in the end comes out with the richest of flavours and colour.