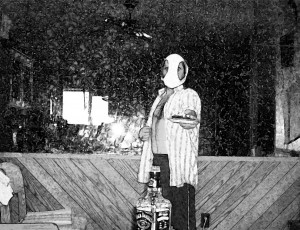 It may come as a surprise to some that one of my hobbies is cooking. I know that there may be a general feeling that the only knowledge I have of the art is somewhat mislaid in terms of sexual inferences but I am aware that roasting wienies is more than when you don’t have enough lube. Don’t be scared of the title, “Man Fudge”; it is not my intention…today…to delve into that sort of topic. I am by no means a Rachel Ray, she could lick the floor with me; well, she could lick the floor – a part of me foresees that in that type of situation I could find some other thing to lick.  Don’t think so low of me, I can’t help it; Ms. Ray has those two big “R”s for her logo.  I cannot be held accountable for the natural evolution of the “RR” to “ar ar”, which we all know is the harkening to a pirate.  What do pirates do? They ravage and pillage. Ms. Ray is of the age to be on the Pill, so what’s left for me to do – damn straight, ravage the hell out of her. Ar ar, avast ye scurvy dog of the female persuasion and prepare to swallow my plank, slather me timber, hoist up yer maned tail, ar ar. Sorry, it seems I have an issue staying on topic.

Today, rather than producing something fancy that sounds complicated and is necessary to have an advanced mathematics degree in order to figure out the precise amounts of spices, I thought I would deliver one of my favorite kinds of dessert squares, fudge.  This recipe is so simple that even I cannot seem to screw it up.

a big pot (and if so inclined, some pot)

1. Pour approximately an ounce of rye in glass.  To fool your mind, make sure you have a firm grip around glass and hold it at eyelevel so that the ounce starts at the top of your fingers.  Drink deeply.

4. After ten minutes realize that you didn’t turn the stove on to medium heat.  Pour another drink as punishment for your absent mindedness.  Take drink.  Begin stirring again.

5.  After another five minutes, realize that you didn’t turn on the stove, again.  Turn on stove to medium heat.  Take a swig from bottle as reward for finally remembering.

6.  Crank “Faster Kill Pussycat” by Brittney Murphy; use that as your stirring beat.  Shake money maker like only an uncoordinated white guy can.

7.  After the mixing for the slowly boiling mixture for five minutes, add marshmallows, vanilla and chocolate chips.  Select “Boogie Wonderland” by Earth Wind and Fire and gyrate hips in time with the spoon so that if anyone was watching they would swear that you were possessed by a retarded ghost. Stir until all the marshmallows have melted.

8.  Pour mixture into pan.  Place in fridge to cool for about an hour.

9.  Take good long drink to celebrate the successful completion of part one of the task.

11.  Write a strongly worded letter of condemnation to Microsoft for their lack of sensitivity in their choice of brand name on behalf of all the men who aren’t very well endowed and suffering from penile dysfunction.  Sign it Stephen Dion.

12.  Take out “Grease” album, put on turn table and put the rpm to 45.  Position the needle on third song on side two of the first album to hear “Greased Lightning” ala The Chipmunks.

1.  Stand directly in front of fridge; open, making sure the handle gets not just one testicle but both.  Drop to floor.

3.  In the bowl, pour in icing sugar, cocoa, margarine and milk.  Stir mixture while humming “I hate everything about you” by Ugly Kid Joe.  If necessary, add a little more milk to make a barely pourable glaze.

5.  Put pan back in fridge for ½ hour; take a drink as reward for completing phase two.

6.  Put in three Michael Buble CD’s intoplayer.
7.  Get pair of clean underwear; put over head.  Mime out making a web line and “swing” around living room after the cat, making sure to chant, “I’m going to get you, Venom!”

8.  After hearing doorbell, answer door, forgetting that you have pair of underwear on your head.

9.  Watch as paperboy slowly walks backwards off step with wide eyes then bolts down the walk.  Close door, “swing” back up the stairs and jump on couch looking for the evil Venom who has disappeared…Remember to refresh web fluid often.
10.  Spot Venom under coffee table; leap, miss and fall face first into carpet.  Thrash wildly about as Venom attacks you with her claws fully extended.  Hear door bell.

11.  Answer door and when your friend, the police officer asks you why you have a pair of underwear on your head answer that you’re looking for Mary Jane.

12.  Take off mask to become Peter Parker.  Engage in friendly conversation for ten minutes while keeping your eye on Venom, who is just above your head on the banister with tail swishing menacingly.

13.  Close door after assuring friend that you’ll drop of a urine sample the next day for drug testing purposes.

1.  Pour another glass of rye.  Take pan out of fridge, this time only banging fridge handle on knee.   Mock the fridge for its poor aim. Place pan on counter.

2.  Take one Skor bar and place on cutting board: imagine it is the face of the broker who told you not to buy 500 shares of a company that was selling at $1.36 a share because with a name like “Google”, it wasn’t going to last.  Punch repeatedly until good and crushed.  Sprinkle over glaze.  Take a dollop of rye to freshen your perspective.

3.   Take second Skor bar; envision any political figure whose two faced weaselness irks you.  I suggest Jack Layton, Stephen Harper and Michael Ignatieff; slap it repeatedly until it has broken into little pieces. Sprinkle over glaze.  Take swig of rye.

4.   Take third Skor; glare at it for a while.  Take a long draught of rye.  Curse at the bar and demean it, then pepper it with short jabs while muttering, “double double that, Tim Horton’s…decaf this, you son of a bitch, etc, with smug satisfaction sprinkle over glaze.

5.  Take the last Skor bar and place on cutting board: Imagine it is yourself and realize that the cute little thing wasn’t just being polite, she was hitting on you.  Crush bar with forehead over and over and over. Sprinkle over glaze.  Finish bottle of rye.

7.  Go to the bar until closing time. 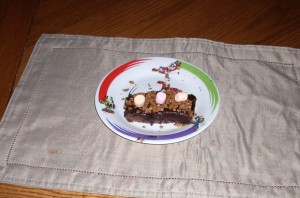 ***Warning: This is not a home friendly recipe, this is “eat this and get the fuck out” one.  This is the step by step directions in the creation of the mother of all sugar bombs.  Depending on the size of the squares, it is possible for a person to feel the effects akin to a double dose of methamphetamines. If serving to persons under the legal age of consent, it is recommended to be used primarily by grandparents, uncles and aunts or given to children of adults that you really can’t stand just before you send them back to their parents at such a time when they will be required to sit still for at least two hours. This recipe should only be used by parents if the child does not come home for lunch and when a parent feels that a teacher deserves to be tortured.

By: Neonorth-Don’t be scared of the title, “Man Fudge”; it is not my intention…today…to delve into that sort of topic. I am no means a Rachel Ray, she could lick the floor with me

Who is the One Tin Soldier?