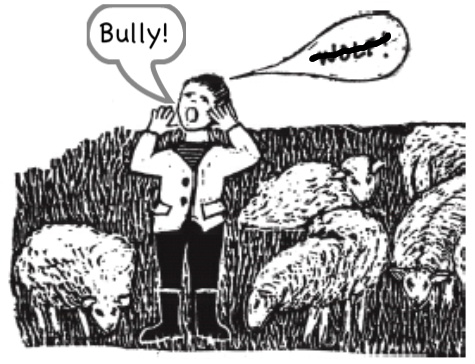 Let’s talk about the anti-bullying bandwagon everyone is chasing down right now.  A word of warning, this will probably piss some people off.

I am sitting in a meeting of counseling staff.  These are trained professionals, many of them with Master’s Degrees and Licensure.  For the sake of privacy I won’t tell you the topic, let’s just say it had nothing to do with staff relations, work environment or bullying.

Out of nowhere an in-network staff member raises their hands and announces we need to talk about bullying and proceeds to do so.  This is an agenda’d meeting and generally for staff to get the lowdown on what changes are going to occur and how it is going to affect them.  Really not a “feelings” or “work out your issues” meeting.

However there is no graceful way to back out of it and said staff member goes on to list the times they have been “bullied” by their co-worker.  The things listed certainly are unacceptable.  But I can’t help but think that less than a month ago, this would be listed under the heading “Hostile Work Environment.”  In addition, there are measures in place to take action, none of which apparently were utilized.

Bullying has become the new buzz-word.  It’s in the spotlight, there are celebrities talking about it on YouTube, and there are foundations popping up around it.  It grabs attention.  People know they cannot afford to ignore these complaints just now and just like sexual harassment, some unscrupulous people are already using it in their attention seeking efforts.

This staff member is a prime example.  This person could have and should have directed their complaints both verbally and in writing to their supervisor and cc.’d it to the director which did not occur.   A company cannot fire or enforce punishment on an individual without a paper trail or they risk resultant “bullying” from the state.  This outburst was timed to grandstand and seemingly just to say the word “Bullying”.

A sadder example: a youth, again I won’t say where or who, but trust me this person is real.  This youth in High School recently took their life.  This person was an achiever, an athlete, a well liked individual.  Like so many people who are serious and complete a suicide attempt no note was left.  Immediately whispers around campus began.

“Was this person GLBT?”

This was covered in newspapers.  The local crisis counseling crew swooped in to said High School and held anti-bullying assemblies.  Somehow, it slipped their minds to speak to the youth assembled about grief and loss, the normal emotions like guilt that come up when your friend and classmate offs themselves.

Parents in grief reach out and grab the string that is strongest at the moment.  It must have been bullying, somebody must have pushed our precious child to this place, and there is no way they could have gotten there on their own.  Or more secretly; there is no way we could have contributed to or missed warning signs.

The fact of the matter is bullying is bad behavior.  It is bad form.  It is a base reaction of one’s own internal struggles.  It should be addressed and curbed at all cost.

But who amongst us has not been bullied at one time or another?  By a sister, parent, teacher, acquaintance, neighbor, cashier, boss, so-called friend?  If anything this is one life experience most of us can connect to and commiserate about.

This is why I resent the blame of societal ills placed on bullying for everything from not dressing as you like to committing suicide.  And here comes the part that people aren’t going to like.  Suicide never happens because of bullying alone.  In every case there are other underlying mental health issues.  If it were the case that bullying caused suicide we would not have an overpopulated planet.

I also resent the apparent separation of us and them going on.  Well do I understand that youth who are GLBT are conflicted, scared and yes bullied.  But can we not use this as something to come together on?  Something that brings everyone back to the same place, the fact that we have all of us experienced this?   Separation breeds prejudice and prejudice breeds more separation.  We must at all cost move away from this place of us and them.  Let’s get together on this one or we are going to be losing more people who see no other way than out exactly because they feel unseen, unheard and aren’t the celebrity’s choice of the moment.

Back to buzz words and their power, like all things I have a feeling the spotlight will move eventually from this to something else.  In the mean time let’s try to set an example for those younger in age and maturity and call things what they are.  If someone is looking up your skirt it’s not bullying, it’s sexual harassment.  If someone throws a temper tantrum and you get caught in it, it’s not bullying it’s creating an unsafe work environment.  If your friend asks you to run with them every day, they may just want your company; they aren’t necessarily bullying you about your weight. And if someone asks you if you are Gay, they may just want to know…take a minute to think about it before you cry Bully.

By: Grainne Rhuad-Let’s get past Buzz words,trends and celebrity endorcements and try to set a mature example.