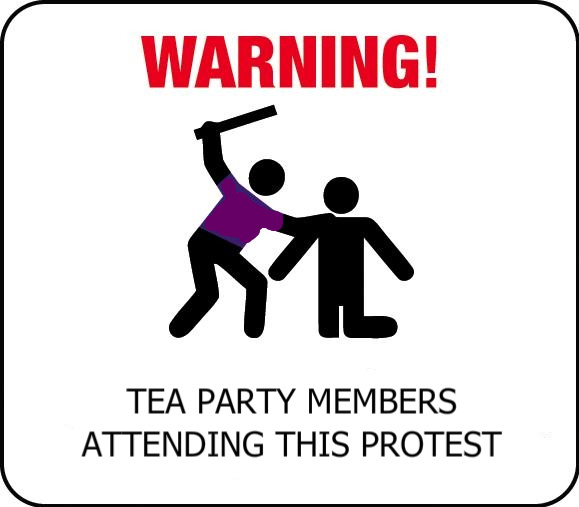 As I write this, I am furious. It may be that when we are angry it is not the best time to be writing one’s thoughts, but on this occasion, I think it may be the very best time.

I just watched a woman being stomped.

I just watched a woman being stomped at a political rally.

I just watched a woman being stomped at a political rally being held for the Tea Baggers’ favorite and self-styled Libertarian, Rand Paul.

Stomped! That is no exaggeration. She was thrown to the ground by a group of bullies, one of whom directed his foot to her head. Anyone who sees the taped evidence of what happened has to experience a visceral reaction. I watched it and became physically ill. I became nauseated.

It could have been worse, but someone in the crowd can be heard telling the man who was using his foot to stop. Another voice calls get the police, but at least during the life of the tape, no police are in evidence. This happened in Lexington, KY.

My question is this: Who or what have we become? It has seemed to me that there is a total lack of civility in the electioneering we are seeing during this mid-term process. There is unbridled hate being directed toward those who are not in agreement with the Conservative Republicans and the Tea Baggers. This hate is so blind, so all- pervasive and so unthinking that it is now being unleashed on any citizen who disagrees with a candidate favored by this ilk. Civility is no longer a part of the political process where name-calling, character assassination and threats have become daily occurrences. The so-called elite of the “take-back-my-country” group preach hate as a matter of course.

We are all allowed to disagree with the government, and that can be a good thing. But the hate against this administration is so strong, and the threat of violence against this president so worrisome, that he has become the most guarded president in history.

What these people who throw out their slogans of hate need to realize is that a genie has been loosed on the population, and there will be no way to put that genie back into its bottle. Precedent has been set. This is not a genie that will grant three wishes, but is a vile spirit spawned of their hate, wearing jack-boots and carrying a gun.

Guns are in evidence, carried openly by supporters in so-called “Rand Paul Open Carry Rallies.” Politics, guns and hate are a poisonous combination. The open visibility of fire arms is not only the product of those who despise all authority, but also a legacy of every cowardly politician who has been so invested in his or her self-perpetuation as an office holder, that limits could not be placed on where the carrying of fire-arms is appropriate and where such weapons are a clear and present danger to all.

The woman who was man-handled at the Paul rally is a member of “Move On.” This organization disagrees with Mr. Paul. Disagreement is not license to violate the rights of any person to voice their views. Mr. Paul needs to denounce the actions of his followers. He needs to be aware that he has inspired a new low in American Politics…. and if not a new low, at least a new low for these times. He also needs to realize that unless the rhetoric is cooled by all those who rant against Washington and provide no answers but only unrest, then the next step will come when one of his followers unholsters his or her gun, takes aim and commits murder. Should this occur, the blame for the resultant tragedy will be his and all others who saw and did not act. If those so-called leaders cannot police their ranks and will not turn their followers away from the violent path, if they will not repudiate these actions and make that repudiation sincere, then those of us who vote must use that vote to be absolutely certain that NONE of these people attain the elective office they seek.

We must also pressure every politician out there to stop the character assassination, the attempts to dehumanize their opposition and the use of words and phrases that encourage violence of any kind to mar the political process. We must pressure them to look at their followers and to tell those followers to leave their guns and military drag at home, that the political rallies are only that and not an invitation to open warfare.

We do not need to be bear witness to the murder of an innocent at a rally via repeated cable broadcasts. It may be good for their ratings, but it will be bad for our souls and for the soul of this Country. It is time to say, STOP!

The David:There is unbridled hate being directed toward those who are not in agreement with the Conservative Republicans and the Tea Baggers.

A Country For Sale