America at its best: Freedom, the Grand Canyon & Navajo country 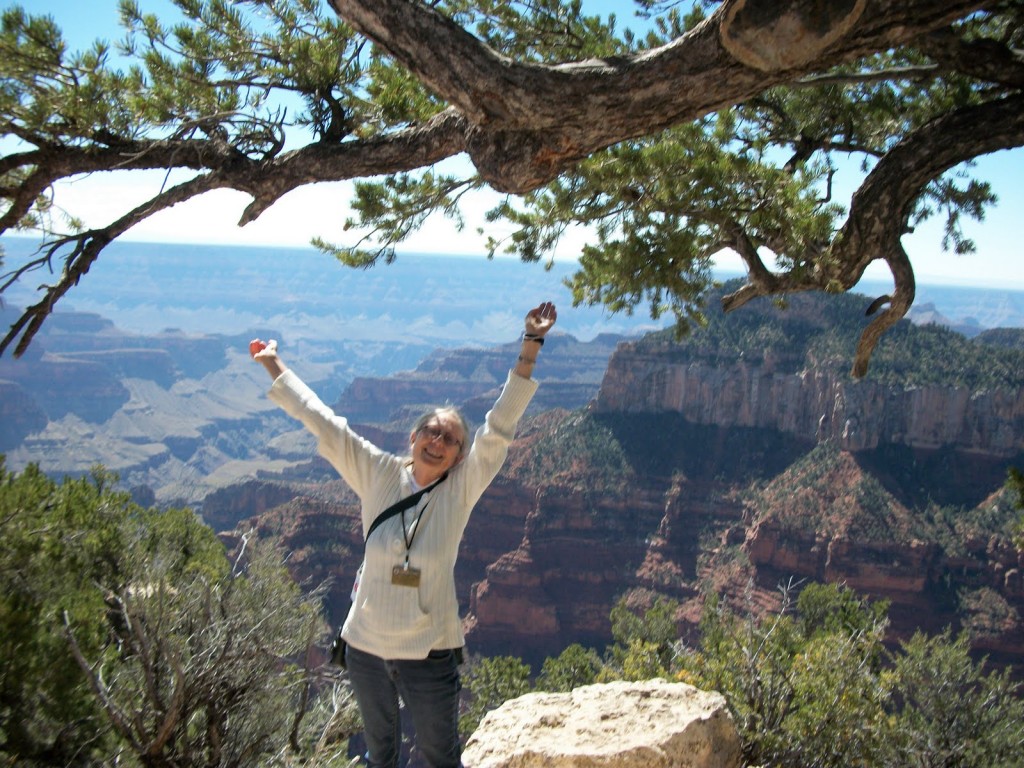 I am one of those devoted American patriots who has totally bought into the whole American package — freedom of speech, freedom of religion, Constitutional guarantees, refusal to be enslaved by corporatists, our glorious flag, healthy unions, hand-counted ballots, the Fourth of July, America first, beware the military-industrial complex, government that benefits We the People rather than the billionaire class, splendid isolationism and all that other patriotic stuff that Republicans seem to hate.

But I never quite realized what a staunch American patriot I really was until I came here to visit America’s amazing Southwest.  After seeing the Grand Canyon, how could anyone possibly not love this country?  This land is really REALLY special.  Woodie Guthrie was right.

Hiking down into the Grand Canyon from rim to rim takes approximately three or four days — just to cover its14-mile-wide span as the crow flies.  And while those of you with good knees  are busily hiking down through the Canyon, Mother Nature sneaks up from behind and smacks you over the head with her breathtaking beauty. 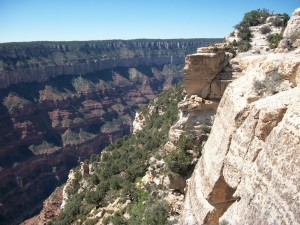 But even if you, like me, are just looking down into the Canyon from the north rim, Mother Nature still totally rubs your face in it.  Beauty, beauty, everywhere.  Beauty that money can’t buy.  Corporate lobbyists may be able to buy Congress, the White House, the Supreme Court and the media but they can never buy anything like this.  And this is far better.  Ha!

After having been totally astonished by the beauty of the Grand Canyon, I then popped over to see the famous Antelope slot canyon near Lake Powell.  “If you thought the Grand Canyon was a big wow,” said my Navajo guide, “this canyon delivers wow after wow after wow!”  Was he overselling his product?  NO.  Absolutely not.  I’m absolutely swimming in American beauty here too. 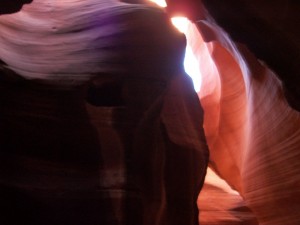 Navajos are always talking about following the path of beauty and now I know why.  These people are freaking surrounded by the stuff.  “Following the Beauty Way has taught us to care for Mother Earth — and to be kind.”

And, as we bounced along rutted dirt roads in a Bourbon going 60 miles an hour on the way back from the slot canyon, I asked my guide a few more questions about Navajo life — and he was too kind to tell me to back off.  But having been gifted with an inquiring mind (that’s fancy talk for being addicted to hot gossip!), I was really interested in this kind of stuff.

“Were you forced to go off to one of those boarding schools run by the Bureau of Indian Affairs when you were a kid?”

“Bad.”  Er, could you be a little bit more specific here?  Please?

“When I was only seven years old, I was seized by BIA agents and dragged off to boarding school.  At boarding school, nobody cares about you.  The teachers were only there for the money and they beat you.  I was beaten a lot.  It turned me violent and mean.  And after I got out of school, all I wanted to do was go find those teachers, now that I wasn’t smaller than them, and smash every one of them in the face with my fist.  I was so angry back then.  I was an angry, violent drunk.”

“So what changed you?”

“The elders.  They led by example.  I wanted to be like them.  Kind.  There is no one on earth kinder than Navajos.”

Kindness is the opposite of anger.  I want to be kind!  But so far it doesn’t seem to be happening, not so much.  Maybe I need to spend more time in slot canyons.

Later on I talked with another Navajo, a young man who had been taught the old ways by his grandmother.  “She made us kids get up before sunrise every day.  She said that people who sleep in late become lazy and old before their time.  She also said that living without electricity, running water and money prepared us for the future.  She used to tell us that someday all of us will have to live without them once again — and so this way we will be more prepared.”

I agree with the grandmother’s prediction completely.  Someday in the near future, when what James Howard Kunstler describes as the “Cheap Oil Fiesta” is over, we are going to have to deal with living without electricity and all that other stuff.  And, sooner rather than later, we are probably going to have to learn to live without money too!

So.  What will be left for us after the current cheap oil fiesta is over?  Who knows.  But no matter what the future may hold, we will always have America’s beauty.  And during my trip through the West and Southwest, I am becoming more and more convinced about what a rare, precious and exciting beauty it is.  During this trip I am becoming, more than ever, a true American patriot. 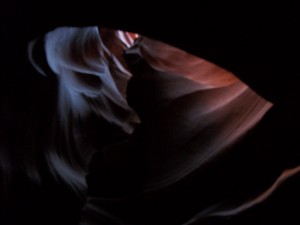 PS:  I’m not the only one who’s been out traveling around America.  Matt Taibbi, who writes for Rolling Stone magazine, has been out there touring too — in search of the illusive Tea Partier.  And here’s what he has learned about them:

“The individuals in the Tea Party may come from very different walks of life, but most of them have a few things in common.  After nearly a year of talking with Tea Party members from Nevada to New Jersey, I can count on one hand the key elements I expect to hear in nearly every interview.

“One:  Every single one of them was that exceptional Republican who did protest the spending in the Bush years, and not one of them is the hypocrite who only took to the streets when a black Democratic president launched an emergency stimulus program.  (‘Not me — I was protesting!’ is a common exclamation.)

“Two:  Each and every one of them is the only person in America who has ever read the Constitution or watched Schoolhouse Rock.  (Here they have guidance from Armey, who explains that the problem with ‘people who do not cherish America the way we do’ is that ‘they did not read the Federalist Papers.’)

“Three:  They are all furious at the implication that race is a factor in their political views — despite the fact that they blame the financial crisis on poor black homeowners, spend months on end engrossed by reports about how the New Black Panthers want to kill ‘cracker babies,’ support politicians who think the Civil Rights Act of 1964 was an overreach of government power, tried to enact South African-style immigration laws in Arizona and obsess over Charlie Rangel, ACORN and Barack Obama’s birth certificate.

“Four:  In fact, some of their best friends are black!  (Reporters in Kentucky invented a game called ‘White Male Liberty Patriot Bingo,’ checking off a box every time a Tea Partier mentions a black friend.)

“And five:  Everyone who disagrees with them is a radical leftist who hates America.”

Jane Stillwater: Beauty, beauty, everywhere. Beauty that money can’t buy. Corporate lobbyists may be able to buy Congress, the White House, the Supreme Court, but they can’t buy anything like this.