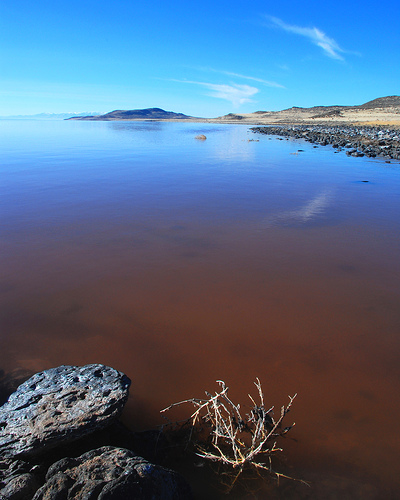 The Great Salt Lake Occupies 2,500 square miles of Utah northwest of Salt Lake City.  It was once part of the much larger Lake Bonneville, now the Bonneville flats, which 18,000 years ago extended across 20,000 square miles including parts of Idaho and Nevada.

The lake is famous for its high salinity which varies between 10 and 25%, second only to the Dead Sea of Israel, but like the Salton Sea in California, the water tends to be rather smelly and this is not a great place for swimming or sunbathing.

This didn’t stop early settlers to the salt lake valley from making it a sunbathing attraction.  Early Mormon pioneers built Saltair, a place that what would come to be known as the “Salt Palace” and boardwalk which was a western attraction for people in the late 1800’s.  There were carnivals to rival Atlantic City and Coney Island there.  This all in all is not surprising as contrary to a lot of belief, those of the Mormon faith are all about fun, dancing and music. 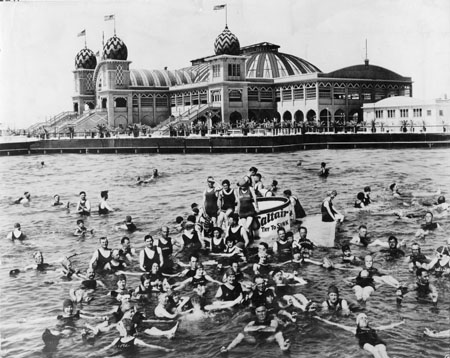 The Salt Palace was a grand Dame sitting beautifully lakeside serving up five star foods and became a place where the people of the Salt Lake valley could show off their cultural achievements to visiting dignitaries, journalists and passers through.  Balls were held there, coming out parties and weddings.

“It’s early morning at the Lake Point railway station.  The sun has yet to fully emerge from behind the Oquirrhs, but the dry August heat has already announced its arrival.  You sit with your siblings in the cramped seat on an eastbound rail car.  Scores of your neighbors and townspeople pack the aisles and platforms.

It’s August 15, 1903: Official Tooele County Day at Saltair Pavilion.  The county’s entire population, it seems, has boarded the train’s ten passenger cars to visit the most thrilling resort in the west.  Try as it might, the blistering heat can’t spoil the excited spirit aboard the crowded coaches this morning.  The train lurches forward.  You’re finally on your way.

You watch out your window as the train rounds the mountain and approaches the legendary edifice.  Rising from the lake at the end of a mile-long trestle, Saltair seems fascinatingly out of place.  The sight of its onion domes and ornate archways against the lake’s bare backdrop startles your senses.

You’ll spend the day swimming in the lake’s salty waters, trying—but failing—to sink. You’ll watch the sunset from the narrow bathhouse arcs.   By the time you board the train again, the pavilion will be ablaze in lights and awash with the scents of corn dogs and popcorn.” –Borrowed from a reflection by Clint Thomsen

However with the advent of trains and through-travel Salt Lake City while it remained a western “metropolis” lost some of its glamour as a stopping point.  The gold rush contributed to this as well.  California grew and in reality had more wonders to offer travelers from the east.  The Salt lake declined as Utah grew and spread out from her early settlement center and the Salt Palace sat and declined like Mrs. Haversham, waiting in her abandoned glory for her groom to show, which he never did…,he had moved on.

I remember several years ago watching The cult masterpiece “Carnival of Souls” (Herk Harvey.1962) in which an organ player takes a position in Salt Lake City and is inexplicably drawn to the old Salt Palace.  The mood was intentionally creepy.  It was a great suspense story in the vein of Alfred Hitchcock.  It had early shades of what would become David Lynch’s trademark weirdness.  A story that whispered of the supernatural and left you unsettled.

This movie incidentally is considered to have some of the best footage of the historic Saltair as it was filmed 8 years before the original building and boardwalk were destroyed by fire.  The convention center that replaces it today is nowhere near its majesty and magnitude.

However it is the creepy feeling that I most associate with the whole of the Salt Lake.  A certain dreariness.  A certain haunted feeling that you cannot put your finger on.  When there I feel as if were I to stay too long my story would switch to something like a Bronte novel.  Some tragedy would occur that would not necessarily have a good explanation to the outside world, but would affect me just the same.

Part of it I think is the fact that The Great Salt Lake is a dead sea.  What used to be an inland ocean teaming with life as evidenced by fossils all over Utah of sea creatures and plant life has dwindled to the 2500 square miles we have left of dense salt filled water.  It is so salient that one can float in it and it is almost impossible to drown…unless you swallow water.  It is a dead place and feels like one.

Interestingly enough the people who inhabited the southern Salt Lake region, the Utes are related to the Paiutes who inhabited the region of Mono Lake which borders California and Nevada.  Both Mono Lake and the Great Salt Lake are places whose spiritual energy gives me a bad feeling.  I cannot think of spending the night in either place.

While it is the Ute Indians that the state eventually took its name from, the northern area of Utah was inhabited by the Sho Shoni tribes. The Goshute Sho Shoni about 900 in number lived in the valleys and mountains west and southwest of Great Salt Lake, with the remnants of their bands located in and around the small settlement of Ibapah, Utah, today.

The natives of the area mostly skirted the Salt Lake. Native American cultures used the freshwater marshes and streams around the lake for hunting and fishing and although it is a vitally live area in terms of water fowl and brine shrimp, the lake itself mostly served as a natural divide in tribal areas between the Shoshoni and the Utes.  The lake was treated as a dead zone and people who went there were mostly outcast. The Spaniards were the first to record the lake.  the Dominguez-Escalante expedition Reaching Utah Lake in 1776, were informed by Indians that it was joined to a much larger lake to the north whose waters were “harmful or extremely salty wherefore . . . anybody getting a part of his body wet instantly feels severe itching around the wet part.”

This did not change much when the first settlers to the area came.  The Mormon settlers to the area used the islands of the lake for isolation and while they later built a boardwalk and playground by the shores, nothing really stuck there.  It was a cursed place. As evidenced by fire and financial ruin.  The current incarnation of Saltair, the convention center is no exception.  The business is most often closed and recent economic problems in our country have had their effect on it. 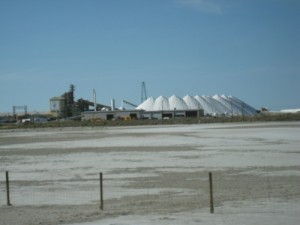 Nowadays most of the income from the lake comes in the form of salt extraction, travelling down I-80 you will see mountain after mountain of salt the sun glinting off it like a pile of especially bright snow.  Morton signs abound.  The state leases the salt extraction pond sites to the salt companies so the state of Utah itself receives income from the harvested salt.

Standing at the edge of the lake one gets the sense that they are staring into a deep cut into mother earth.  A weeping sore that has no bandage.  It is a sad place, that smells rotten and does nothing more than remind you that there are rips in our earth that we cannot repair.  On this, my most recent trip to this area I am especially aware of this.  I am in a state of mind to wonder if other areas like New Orleans will soon become wounded reminders of our affect on earth, especially with the newest oil rig blow up.  Will people notice them as such, or will we continue on tearing and hurting our environment and in turn ourselves until it is all too late?

By: Grainne Rhuad- Standing at the edge of the lake one gets the sense that they are staring into a deep cut into mother earth. A weeping sore that has no bandage.