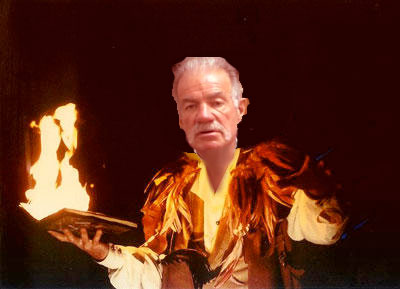 9-11 will always be remembered by the American media as a day of tragedy that will forever be milked for all its worth. 9-11 will always be remembered joyously by political hacks as the death squall of true democracy in American, and for the rest of the world it will be remembered as the day that the American public became their government’s puppets. The aero-attacks on the “Twin Towers” and the Pentagon were indeed horrific and sinister, but rather than being seen for what it was, it has become the excuse for tyranny at home and abroad in America. There is no great example of this than this year’s dramatic flavor of 9-11, courtesy of one Pastor Terry Jones out of Florida.

The catalyst for Pastor Jones and his congregation’s decision to burn the Qur’an – The building of a mosque, a place of worship for the Islamic faith two blocks from “Ground Zero”. Of course, two days before the scheduled destruction, the pastor issued a statement that said he had called off the burning of the Qur’an because the Muslim developers in New York had agreed not to build the mosque (which the developers denied).  This puts the question forth: why is there an overt duality to America when it comes to acts of violence? A mosque, a place of worship and contemplation in the same area where a park now sits in replace of a building; in Baghdad, a place where multiple acts of violence occurred by American forces these sits an armed base.  How many plains where American Calvary slew entire tribes of Native Americans or forced them into reservations are there that are concrete jungles, waste disposal plants or landfills? If the American media wishes to hammer home that the World Trade Center, in the scope of all things that encapsulate America, then take a wander over to “Youtube” and type in the search word “Jdam” as it applies to Afghanistan or Iraq, the joy in the soldiers voices as they turn buildings into rubble (including a mosque).

In the world there are two primary types of people: Those who wear their faith like a serape, and those who wield their faith like a scythe. Generally speaking, those who wield their faith do so as a desperate act to avoid having to question the beliefs they have about their faith. When a person lacks true faith, they resort to using the little faith that they do possess as an excuse for their actions they do not wish to accept personal responsibility for.  Faith takes many forms, not just religious, yet people constantly step out of their accountability by using faith as a weapon or defensive shield against those who would wish to question.

Pastor Terry Jones of the Dove World Outreach Center is one of those who wield their faith rather than wear it, to show how strong he feels about his faith.  But does he really feel strongly about his faith? What does the burning of the Qur’an really accomplish? What does his proposed action really say about his devotion to his faith and his validity in providing leadership to a congregation? It is an enigma that a person who cannot offer anything but incongruence as he spouts scripture that he could even have a congregation.  The probability of that high of a percentage of people with lower self image and esteem complexes than the Pastor must be astronomical.

If Pastor Jones would have bothered to read the Qur’an, which he proudly states that he hasn’t, he would understand the fraternalism of its contents with his thumping platform, the Bible.  In the act of vandalizing the Qur’an, he too vandalizes what he professes to be his beliefs. It is an unveiling of how little respect he has for his own proclaimed beliefs.

It is a show how little American politicians, including the President, care for those who elected them once they are in power.  There have been the ”tsk tsk” statements but it would appear unless a person speaks with a definite un-American accent, that is the extent of these politician’s concerns. It is curious that in the throes of mid-term elections in which Republicans and Democrats are constantly spewing out sound bites of the inaction of the other, yet fail to recognize the opportunity to exemplify that they are capable of action. Amend that, if Pastor Jones would have said, “I’m going to burn some James Brown CD’s” to protest Martin Luther King day, the politically correct machine would have been thrown into overdrive with a quick resolution and a court date for the good pastor under the American Hate Laws – which is wonder that there are such laws with the proliferation of racial profiling admissions from the various policing bodies in the United States. With the reaction from the Muslim world on Jones’s plan for the Qur’an, it makes one wonder why America’s pit-bull, Homeland Security, did not have the congregation rounded up as a terrorist threat, since the action surely would have provocated an intense reaction to all Americans abroad.

It would be heinous of anyone to call Pastor Jones a douche bag, and in a world filled with douche bags, though fortunately society has managed to corral them primarily in politics and education settings douche bags at least serve a sanitary purpose; could the same be said for the Pastor? Have no fear Pastor Jones, you are in America, the land where as long as you are a white Christian male, you can whistle your amendment rights from between your buttocks to your heart’s content and you’re just expressing yourself. Enjoy your spotlight today because your fifteen minutes have come to an end; let the contest for the next harbinger of hate takes their turn in the spotlight.

Editor’s note: We are aware that Pastor Jones called off the Book Burning.  We also are aware that as of publishing the Westboro Baptist Church have joined the media circus.  The message of this article is the important thing, the names we are sure could be reassigned infinitely.