Converting the kaffir: Islam at Swordpoint 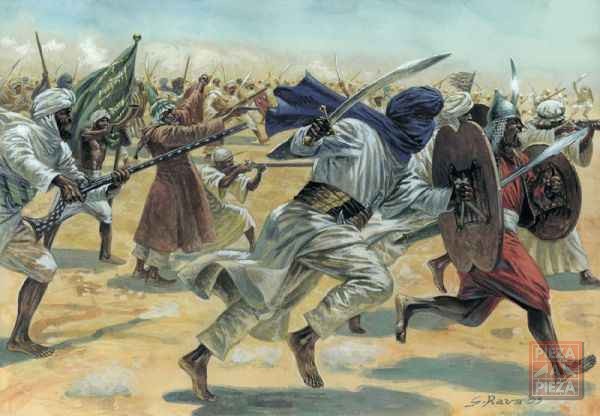 It’s a very, very common thing expressed by the Great Indian Muddle Class, which, as I’ve mentioned before, is reflexively anti-Muslim; the idea that Muslims want the non-Muslim world, specifically the Hindus, to be converted to Islam at the point of a sword (or at the point of a nuclear warhead, or whatever the weapon of choice may be).

The idea is that the Muslims cannot live alongside Hindus (for the Great Indian Muddle Class, Hindus are always victims) in peace because their religion compels them to convert any and all non-Muslims to Islam by any and all means possible.

By that “any and all means possible”, incidentally, I mean the hilarious notion that personable Muslim guys are going on a “love jihad” (yes, you got that right, “love jihad”; I did not make it up) to seduce innocent Hindu maidens and convert them to Islam. So we’d better add penis-point to the list. But still, sword/equivalent point is the preferred method, and has always been so. The Muslim wants the kaffir to cease to exist, don’t you know.

Is that the truth?

Now, I’m not going to go into what the Koran says on the subject, for two excellent reasons:

First, what a religious book says is open to just about any interpretation anyone cares to put on it, and in a millennium and a half of translation and interpretation and re-interpretation, most of the original meaning is inevitably distorted to the point where you can’t begin to recognize it.

And, secondly, because what a religious book says has absolutely nothing to do with the actions of the adherents of that religion, whether those actions are justified by said religious book or not.

No, I’ll go for much more direct evidence.

As the Hindu Muddle Class itself says (in fact, as the Hindu Right makes a great song and dance about), most of the Indian Subcontinent – and all of its most populous northern, western and central parts – were under Muslim rule for getting on for seven hundred years.

The first Muslims arrived within years of the Prophet Muhammad’s starting of the religion, in the shape of Arab traders, but the real Muslim presence in the subcontinent came in the form of the incursions by Afghan warlords in the tenth and eleventh centuries, especially Mahmud of Ghazni, who made repeated raids into Northern India. Did this rapacious warrior and plunderer stay to convert the heathen? No, he took his loot and went back home…again and again and again.

Later on, the Afghans (and Turks) returned in more permanent fashion, setting up a kingdom in North India centred on Delhi, known as the Delhi Sultanate. This kingdom was ruled over by a succession of Afghan and Turkic Muslim dynasties, and eventually fragmented as provincial bosses declared independence when they had the opportunity, and formed their own Muslim kingdoms.

Finally, the Islamicised Mongols under a young khan named Babur came down from Afghanistan in 1526, whipped (with the aid of that hitherto unknown military innovation, artillery) the (Muslim) Lodhi king of Delhi, Ibrahim, at Panipat and, but for a brief (Afghan) Suri Dynasty interregnum from 1540-55, ended the Sultanate once and for all.

That was the beginning of the Mughal (a corruption of Mongol) Empire, which ruled over most of North, West and Central India until its power began to wane in the first half of the eighteenth century, and hung on in titular fashion until the British dissolved it permanently in 1857 by imprisoning the last Emperor, Bahadur Shah II, and murdering his sons after they had surrendered.

Therefore, for a period of seven hundred years, that part of India which mattered most, population wise, was under Muslim rule. Some of these Muslim rulers were highly tolerant and enlightened; one, the Mughal Emperor Akbar, created his own synthetic religion, called Din-e-Elahi, but found few takers except for his ministers including the (Hindu) court jester, Birbal. Most were rather indifferent to religion, leaving well enough alone. A few were anti-Hindu to the point of psychosis; the Turkic Khilji Dynasty Sultan Ala-ud-din (known among other things for having succeeded to the throne by having his predecessor, his uncle Jalal-ud-din, murdered) promulgated a decree ordering Hindus to open their mouths so Muslims could spit into them.

Good or bad or indifferent, they ruled over most of the subcontinent for centuries, and their rule over the most populous area, the vast North Indian plain around the river Ganges, was absolute. Unlike other parts of the subcontinent where Muslim overlords ruled through Hindu vassal kings, in the North and Centre of the subcontinent they always ruled directly and with absolute power.

Now, don’t you think that if there was any truth to the idea of forceful Muslim conversion, the territories these men (and a couple of women, too), Afghans, Mongols, or others ruled over would have been thoroughly cleansed of Hinduism in all these years? Even if some of them protected the rights of their Hindu subjects, others who were frankly haters of the idolatrous infidels of the land would surely have done their utmost to erase their religion from the face of the earth?

So what happened when the British took over the Mughals?  Did they rule over an overwhelmingly Muslim land?  Did they, hell.  Only a third of the population they controlled was Muslim – the rest was overwhelmingly Hindu.

Those Muslims, by the way, were everywhere: even those parts of the subcontinent which were never under Muslim rule, at any time, whether the far south (the Tamils) or the extreme east (the Manipuris) had many of their people convert to Islam.

Conversion at the point of a sword, was it, now?

The facts speak for themselves: conversion from Hinduism was a voluntary affair, mostly occurring among the vast oppressed masses at the bottom end of the Hindu caste system. They thought of Islam as they had thought, in earlier centuries, of Buddhism, and as they would think later of Christianity: as a means of escape from the terrible inequities of the Hindu caste system. Of course, there were those who converted because they thought that a change of religion to that of the ruling dynasty would bring them closer to the source of patronage, but that’s true of any feudal system, and India has always been feudal to its roots. But the overwhelming mass of the converts away from Hinduism have always been from the lowest castes; right from the time of Siddhartha Gautama and his Buddhism to the Baptist missionaries in the forest villages of Central India today; and it has virtually always been entirely voluntary.

In fact, I’d say that if the Muslim rulers had really been so hell-bent on converting Hindus at sword-point, there wouldn’t have been many Great Indian Hindu Muddle Class members left to castigate Muslims today, and none of them would have been from the home of Indian Hindu fascism: the north and centre of the country.

Put that in your hookah and smoke it.

By: Bill The Butcher-It’s a very, very common thing expressed by the Great Indian Muddle Class, the idea that Muslims want the non-Muslim world, specifically the Hindus, to be converted to Islam at the point of a sword