Here’s My Wish List for When Congress Calls Me 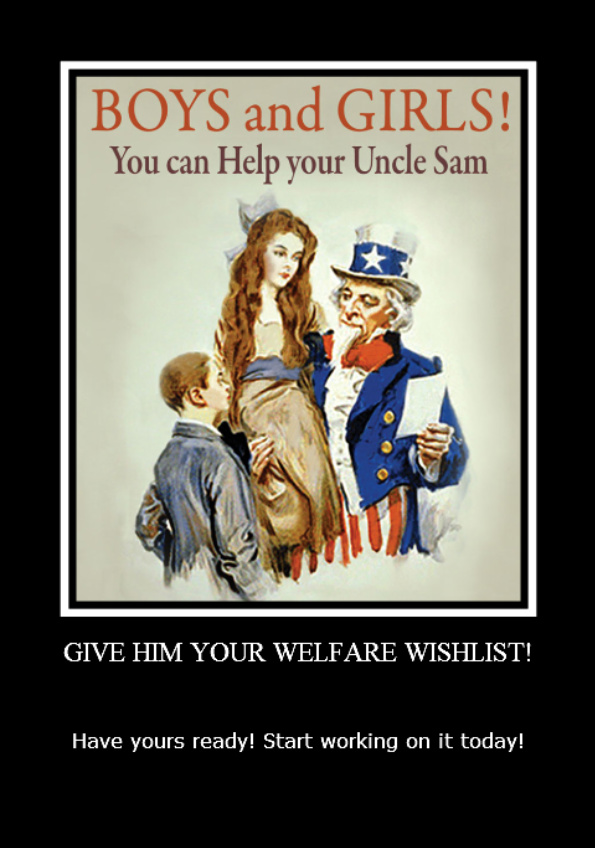 Well I’m a taxpayer and I have no objections if some of my tax dollars are used to extend Unemployment Benefits. In fact that sounds like one of the most sensible spending of tax dollars that I’ve ever heard. Helping put food on the table of hungry Americans seems just the right path for a nation that gives so much lip service about its Christian-Judaic traditions.

I wasn’t aware that people in Congress paid so much attention to taxpayers and how they want their monies spent. No one has ever contacted me. I’d much rather my taxes go for extending Unemployment than for many of the other things. For example, the billions being spent in Iraq and Afghanistan with much of the money going to civilian companies such as Xe Services LLC, formerly known as Blackwater, and Halliburton. And while on the subject of those two Mid-Eastern nations I would appreciate it if my tax dollars were not being spent on killing people – civilians as well as our own troops. It’s fascinating that some members of Congress are so concerned about my tax dollars being spent on unemployed citizens, and it seemed contemptuous to ignore me when my dollars were going for death and destruction.

Some of the most conservative members of Congress, those outspoken against dollars for Unemployment extensions, have suggested that such assistance would stifle people’s initiative in finding jobs – so would hunger and homelessness. Those are deterrents for pounding the pavement in pursuit of employment. This seems like a rerun of the Reagan years when there were cruel arguments against Welfare, now called Public Assistance. Reagan created a fictional woman. She was Black with many kids, lived in Chicago and was living off of Welfare. She didn’t exist, but even if she did, the war on Welfare was like throwing out the baby with the bathwater. Numerous colleagues of mine were acquainted with many people on Welfare at that time during the Reagan years; men and women coming home from prison desperately seeking employment but finding job barriers wherever they went. At the Fortune Society in New York City, an organization that works with people who were formerly incarcerated, they guided them to Public Assistance, Welfare, so they could be stabilized while job hunting. Many had to be convinced to go on Welfare, resenting and resisting government dependence. All of this was a complete opposite of the propaganda conveyed about Welfare recipients. The men and women I talked to resented the indignities inflicted on those who went for Welfare.

Welfare, like Unemployment, is a way of maintaining hope. Of course Fox Television and a few Texas and Oklahoma Congressmen can probably locate one idle person living off unemployment, and they’ll build a political and economic argument around the inertia of a single individual and deny survival for thousands. I’ve read that it’s essential to give millions of dollars in bonuses to corporate execs, many making as much as ten million dollars a year before the bonus. Without the bonuses I’ve been told, they would lack the drive and the incentive to perform to the best of their ability. I recall a Verizon Public Relations person in a letter to the New York Times arguing that to get the best you have to pay the most. At that time the Verizon CEO was given millions of bonus dollars. At the same time over 2,500 employees were let go – right before Christmas. Why then is the distribution of a few survival dollars not the same incentive for people at the opposite end of the economic spectrum? Congress persons seem comfortable offering tax abatement to corporations and billionaires while becoming economically-wise and stingy with the less economically stable Americans, or to put it more bluntly, those who can’t afford to make major contributions to the political campaigns of the moralizing legislators.

So let’s look at the bright side of things. It’s encouraging that members of Congress are expressing concern about how taxpayers feel when they appropriate money. So I’m expecting a call any moment from Orrin Hatch, or Lindsey Graham, seeking my approval of upcoming appropriations. I have my list ready. I would opt for less money being spent on Federal prisons and more for community programs that are less costly and more humane, and more effective in the real fight against crime. I would like to withdraw troops from the Mid-East and thereby saving piles of money that could be better spent on restoring bridges, tunnels, building schools and affordable housing. Do you realize how many jobs we could create getting people off Unemployment? I’d also like to put a halt on government assistance in building new baseball and football stadiums. The George Steinbrenner’s of the world can well afford to pick up the tab. Their TV revenue alone could solve the economic problems of the United States.

See, it’s good that they’re asking taxpayers like me what we want. I’m just starting, and I’m filled with ideas. Alright Congress, I’m sitting by the phone. Call me!

Troy J.: I’ve read that it’s essential to give millions in bonuses to corporate execs, many making as much as ten million dollars a year before the bonuses.