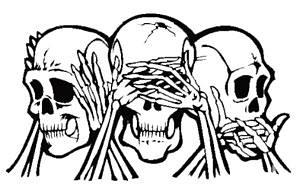 Kyle K is a first time contributor to Subversify and we are happy to break his cherry.
Kyle works as a factotum in the non-profit publishing arena while working on his English degree.  He says, ” I have one wife, two boys, three dogs, six chickens, and a broken motorcycle. I like rainbows and ponies dolphins, and air.” He also believes Captain Crunch is guilty of war crimes and serial killers need hugs too…and don’t we all?

America has a problem with the truth. It’s no big secret, we always have had a problem with the truth, it’s just that now we’re really starting to pay for it. The amazing thing is that no one wants to stand on the truth alone. Everyone has an agenda and they bend and warp only the facts they need in order to support their cause. Walt Kelly’s character, Pogo, once said, “Yep, son, we have met the enemy and he is us.” Though this was used to bemoan the state of pollution and the destruction of natural resources back in the early 70s, it applies to us as a nation today as well.

One of the latest uproars in the media, the white house, and in the grassroots arena is Arizona’s new law on illegal immigrants. So far there has been so much posturing, grandstanding, accusations, and fear-mongering that the truth is once again buried under piles of still-steaming political rhetoric. I listened when Obama, Holder, and Napolitano all said things that made the Arizona law seem like a draconian, Soviet-era infringement on freedom and the destruction of one’s first and fourth amendment rights – then they all admitted that they hadn’t even read the bill. Does this make sense to anyone at all? Here we have a president who was once a law professor, the attorney general of the United States, and the head of homeland security (also a former state attorney general) none of whom could take the time to read a 17 page bill before commenting. Considering Obama’s record of speaking first without knowing the facts (the Gates fiasco) it seems to me that the truth would have been far more helpful than fear-mongering and baseless claims of profiling and harassment.

I decided to take the time and read the bill, since no one else seemed to be doing it, and found it rather limiting compared to what I had heard and read. I then went a step further and read up on Mexico’s illegal immigrant policy and our own federal government’s policy. I found several facts (truths) that were very interesting.

1. I would much rather be an illegal immigrant in the United States than in Mexico.
2. Our federal government has failed at one of its key purposes – protecting and defending our national borders.
3. Arizona’s new law doesn’t provide for any enforcement or prosecution that is not already federal law.
4. Arizona’s law makers seemed to anticipate trouble with the current administration and tried really hard to word their bill so as not to supersede any federal authority.

So now I’m left asking myself, “why is this a big deal?” Then it hit me, no one wants to face the truth. If there is a federal law on the books making it a crime to enter the country without proper authority then anyone who does so is a criminal. It really is that simple, but it’s not. There are several groups in this country who are against our immigration policy. In order for that policy to be changed to fit their desired agenda the law must first be demonized, then made to look inhumane and immoral, then made to look like it violates human rights. Once we have this, the perception of the American people is that the law must be changed or done away with all together.

On the other side, there are groups who don’t want illegal immigration. This, to me, would be the most easily defended position and the easiest to get the government to respond to – if those people stuck to the facts. These groups use almost the same tactics as the pro-illegal immigration groups, but they target a different audience. The racist groups are the easiest to motivate because they are generally already angry. They are fed stories about how illegal aliens are stealing jobs, committing crimes, destroying our culture, and ruining our schools. Then others are riled up with stories about how much American money is being sent across the border, how the illegals are flooding our hospitals, homeless shelters, food banks, and the welfare system. Taxes aren’t being paid, illegals are getting Social Security assistance, children of illegals are being given citizenship, and illegals are getting in-state tuition at colleges and universities. Now the immigration laws aren’t strict enough, the government is not doing its job, the country is being overrun, and we’re losing our way of life.

So now both sides have their ardent followers, chaos ensues, and nothing gets done in Washington because all the overpaid, power-hungry political hacks are afraid of making a decision that might screw up their chances at reelection. What if we just stood back and accepted the truth? Countries all around the world are struggling with immigration problems due to the same kind of policies and political games that America is dealing with.

All over Europe – in France, Germany, and Spain – and also in England and other parts of the U.K. Muslim immigrants are flooding in and setting up shop. The politically correct and humanists have no problem with this, just like they have no problem with it in America. Only there is a problem. Muslims, particularly those from the Middle East and Asia, are used to a Theocracy where Islamic law trumps all else. In France, the Muslims are angry that full-faced burqas are being banned. They feel it is a violation of their religious freedom and their culture. Point taken, but what about the country they are now living in? Is France now supposed to cater to the needs of a group of immigrants over their national security and laws of the land?

Why would a country put itself in a position to have to deal with this? Why allow a problem to grow so big that the only solution is no solution? Here in America, what are we to do? Our country is in such a financial crisis and now in so much debt that even if we wanted to deport every illegal alien we no longer have the financial means to do so. Now that so many illegals have lived here for so long and had children on top of children who only know this country as their home, what can we do?

The truth is, realistically, we can’t do anything. We avoided the truth of what was happening at our southern borders for so long that now we are left with no solution. We can deport illegal aliens as we catch them, but for every one that is deported 50 or more get through the net. It’s already against the law to employ an illegal alien, but no one is enforcing the law, so there are still plenty of jobs to be found. We could cut off government aid to illegal aliens, but that would mean making a decision in Washington and that’s never going to happen.

The problem is this, we have met the enemy and it is the truth. The truth now has us cornered and we’re afraid. We’re lashing out in fear and anger at an enemy that we have fed and nurtured for decades. Everyone sees that enemy in someone else. Speak a truth that someone disagrees with and you are attacked, mercilessly, from the other side until you shut up or go away or are discredited. Anyone, from either side, that only embraces part of the truth will always be seen as the enemy by those with opposing views. We must stop taking sides and politicizing everything. America is a great nation with great promise and opportunity for all. She may not be perfect and justice may not be truly blind, but there is no place greater in the world. If we could just look truth square in the face and accept it over our meaningless and blind political agendas it will no longer be our enemy, it will be our purpose.

By: Kyle-It’s no big secret, we always have had a problem with the truth, it’s just that now we’re really starting to pay for it. Everyone has an agenda and they bend and warp only the facts they need in order to support their cause.