The Irrelevancy Of Education 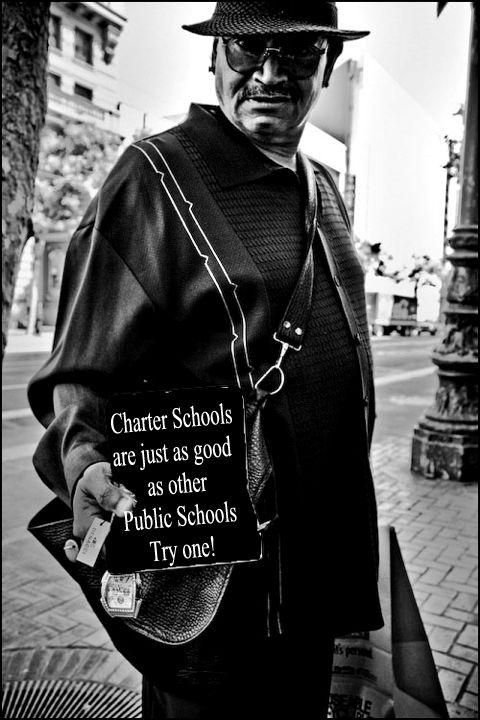 Well, when I’m perplexed by the politics and social state of things, I find myself singing the opening line to a 60s pop tune by Burt Bacharach and Hal David, made famous by Dionne Warwick. It goes like this. “What’s it all about, Alfie?” It calms me down until the next irritating personality or issue surfaces. So let us begin.

I suspect that the passion for charter schools is in some way a recognition that people have given up on the public school system. Charter schools in fact seem to be private schools for kids that aren’t from rich families. New York State Senator Bill Perkins has been taking a beating on the pages of Rupert Murdoch’s New York Post for challenging government dollars directed at charter schools. I can’t speak for the senator, but I tend to look at the charter schools very much like the New York Times annual 100 neediest cases. As a kid I would read the heartfelt stories about lonely widows spending Thanksgiving Day at Bickford’s, sitting alone in a torn cloth coat eating turkey a la king before reluctantly returning to their one room windowless apartments filled with memories and cats. The New York Times would boast that our dollars would rescue the woman from her financial desolation. Every day a case would be presented to the readers, and I always wondered why my family never made that list. My parents each worked two jobs and still we lived in poverty hoping we could make next month’s rent. We would read these stories and we would feel better about ourselves for having rescued limbless war veterans and abandoned wives, and disease ravaged children. I was probably challenged by these stories, because to my families dismay I would ask, “What about the 101st neediest case who would not benefit from these readers? And what about the 102nd and 103rd? What about the 350th neediest case?” They were like the guy who invented a soda and called it 6-UP, not knowing how close he came to richness and success.

Then there’s rich Jennifer Hudson, the talented young woman who won an Academy Award for her performance in the film version of the musical “Dreamgirls.” Jennifer was profiled, regaled and celebrated for making her pudgy self into a new version of the American dream. At one interview Jennifer revealed that 800 other young women auditioned for the role that won her an Oscar. She told us, “God had chosen her,” and America gave a spiritual sigh of relief and appreciation. I yelled at my television set, “Where was God for the other 799 women? What about their dreams and hopes?” Is God like charter schools, that selective for every chosen princess? Are there 799 ladies in waiting?

I can understand why parents are cheerleaders for charter schools if a real education is being offered with college and other opportunities on the horizon. But what about the parents and children who don’t get selected? Are they condemned to the New York City public school system – too often overcrowded and irrelevant? It comes down to this, New York City like a lot of other places around the map has to figure out that education and children are important. As vital to the city as the building of a new Yankee Stadium and CitiField for the New York Mets. The recently failed idea of denying MetroCards to students to ride the subways and buses for free to get to school, is merely a symbolic, but damaging, aspect of our view of the future of children. It might explain why our nation has been slowly surrendering its role as the most powerful and influential country in the world. Education here in the U.S. counts for a few, but not for all. In the last half century greed has overtaken our desire to be a growing relevant people. Education opportunities remain limited, and we are a television audience that celebrates and longs for things, and gadgets, and cars, and pools, and jewels. The men who led us into our current economic crisis have set the tone. Their kids are in private schools, so public education is not a factor in the lives of the people who are shaping our national ethos. The distance between the haves and the hopefuls has widened.

Charter schools are an attempt to close the gap. In reality they end up exposing that children and education are on the back burner. Kids in charter schools are like Jennifer Hudson, the celebrated and the anointed; their hope is real, while behind the scenes remain thousands who are being prepared for marginal lives. A few kids from the projects will make good, and they’ll be suspended in air for the world to see, claiming adversity can create success and that the American dream is alive and flourishing. My suggestion – visit the family shelters and the Single Room Occupancies in this town, and bring an elected official with you. Look at those kids and ask what the future holds for them. The issue is not charter schools; it’s about the priorities and hopes for all the children.

At the Fortune Society, an organization that works with people who were formerly incarcerated and where I teach two nights a week, each day I’m there I meet men and women who were forgotten as children. Some define themselves as “throw away kids.” Toss that term in your head a few times – a “throw away kid.” These men and women, now branded as ex-convicts, with all the restrictions that come with such a label, they’re almost all entirely examples of the overlooked, forgotten, and abandoned children of a society that has lost its way. It all began before they walked through the prison gates. It started years before that. Education for many is the escape from such doldrums.

I’m not opposed to charter schools, but I’m wondering where the advocates for those on the outside of the special schools are? And that’s when I start singing this song – “What’s it all about, Alfie?”

By: Troy J.-I suspect that the passion for charter schools is in some way a recognition that people have given up on the public school system.

The Snows of Kandahar: India and Afghanistan