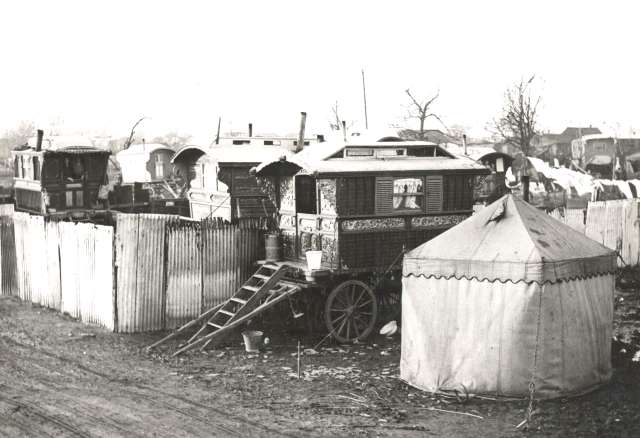 I was only eleven years old when the film THE LAST UNICORN, based on the brilliant novelette by Peter S. Beagle, burst onto the screen. Despite the unsightly animation, the tale filled me with melancholy, a strong and bittersweet sense of fading mortality, love, regret. Yet when the witch-huckster Mommy Fortuna’s midnight carnival rambled up the road, I was stricken with excitement. I fell head over heels in love with travelers, strange “creatures of night,” monsters from fantasy and mythology. There was something about the idea of the carnival that was an arrow in the heart. I knew my own writing had to involve travelers of some sort. Carnivals, gypsy folk: the nomadic life fascinated me.

When I began my novel, now titled A LADY OF ROYAL BONE, it began with travel. The main character, a young girl, was traveling through dangerous wilds alone toward the court of Vlad the Impaler, when a wolf threatened her. Only the intervention of a traveling band of gypsies spared her from certain grisly death. Although the novel began to spin back and back, filling in more of her story, the scene remains in place to this day and the gypsies are an important part of the tale.

What is it that fascinates me about traveling people? My favorite books—not only THE LAST UNICORN but others such as MERIDON by Philippa Gregory or WATER FOR ELEPHANTS by Sara Gruen—involve travelers, circus people, carnivals, gypsies. Whatever reason for their nomadic life, the fact that the characters remain in motion, never set down roots, pulls at me. I once felt that pull particularly strongly.

I used to attend Renaissance Faires regularly, and when I was given the chance to work as “Town Director” for a small Faire myself, I jumped at the chance. I loved the feel of an older world, dirty and gritty though it was (lots of road dust and sweat, and little running water, made for a certain authenticity). Nights were spent before a bonfire, often singing or exchanging tales. It was during this time I made the acquaintance of a certain old gentleman who made his entire living traveling the Faire routes. He cleaned his laundry at local Laundromats wherever he happened to be, never watched TV or movies, and learned his news in small snatches at said Laundromats. He was a wandering minstrel of the modern age, and it happened that our voices went well together. We shared songs, and when that Faire was over, he invited me to go on the road with him. Me? Leave my Chicago job and apartment, and go on the road, singing, and living effectively in the Renaissance? My mind was windswept with the possibilities.

In the end, I chose not to accompany him on his travels, but always wondered wide-eyed at what life might have been like, had I made another choice. Ironically, however, life tossed me to the winds and I spent much of the next decade nomadic, but not by choice: always moving from one life to another, never able to root in a single place for more than a year at a time.

And I came to realize then that the life of a traveler is more difficult than the happy fantasy makes it seem. Moving is difficult, it is expensive, you lose your friends, and your children (if you have any) change schools, uproot themselves, and feel less security and familiarity with their surroundings. Emotional connections are no longer made because of the fear of later separation. An outsider feels high above his or her locale, never involved with the small local intrigues and politics, yet at the same time yearns for the small connections to local people feel to their community and their neighbors.

Traveling people may also come across more opportunity for immoral and illegal behaviors. They are laws unto themselves, or following only the law of the land. It was recently discovered that truck drivers have a higher incidence of serial killers in their ranks. Borders dissolve, states whiz by in a blur with no distinctions, and morality tends to fade. When outsiders then attempt to force their understanding of law onto a nomadic civilization, like gypsies, they are only gazed at with blank lack of understanding. Laws? What do laws mean to people such as this, who have guided their own way for generations? There is a thin line between the two, a veil like the separation of the living from the dead. The travelers are not dead, not ghosts, but nearly as much to those who remain rooted. They blow away with the wind, flake away with the snow, melt into the shadows. We may or may not see them again, but they may trouble our sleep, ever so slightly, like the unicorn we think extinct and mistake for a white mare. We cannot understand that existence.

By: Savannah Thorne-There was something about the idea of the carnival that was an arrow in the heart.

What the Tea Partiers Should Know