Stephen Harper: The Man who would be King

The political, social and economic landscape of Earth is the wax that surrounds the wick of human existence.  That wick, for the better part of two centuries, has been burning hungrily with the excessively oxygen rich atmosphere of technological advancement.  The wick has gotten to the point where the wick has lost its stability; the wax is far more malleable than even a scant half decade ago.  It has given opportunity to those whose weaker hand could not before mold global direction the way we now have the tools for doing.  These inexperienced craftsmen merely clumsily patched or hastened the liquefaction of the wax instead of fortifying the foundations of the candle.

These craftsmen, from the ancient such as China to the new, such as Canada seek to alter global political and economic policy through the success of their trading value on the world market. Unlike most of the G-20 nations who suffered losses in the recent recession trend, China and Canada experienced a far milder economic blow.  This has given these countries more ‘weight’ in world opinion on matters that in the past the official government communiqués would have gone unnoticed by the media. Though the European Economic Unions fiscal upheaval has played a role in Canada emerging as a leading country in the G-20, it has been the American slide politically and economically for the past decade that has had the largest impact.

For the past several years the American economy has been hit hard by the world recession.  While there are indications that the American economy is beginning to improve (1), the American trade deficit with its trading partners has made the American voice small in terms of global economics.  The Canadian loonie, which has traditionally kept 15-30 cents lower than the American greenback has for several years been close to or with parity; despite American demands, China refuses to devalue its yuan in order to strengthen the American currency on the world market. These actions by foreign powers put The United States in a supplemental position for global economic policy decisions. The United States, with its limited natural resources, cannot afford to demand resolutions advantageous primarily to its economy without risking an economic backlash that could further reduce the value of the greenback. 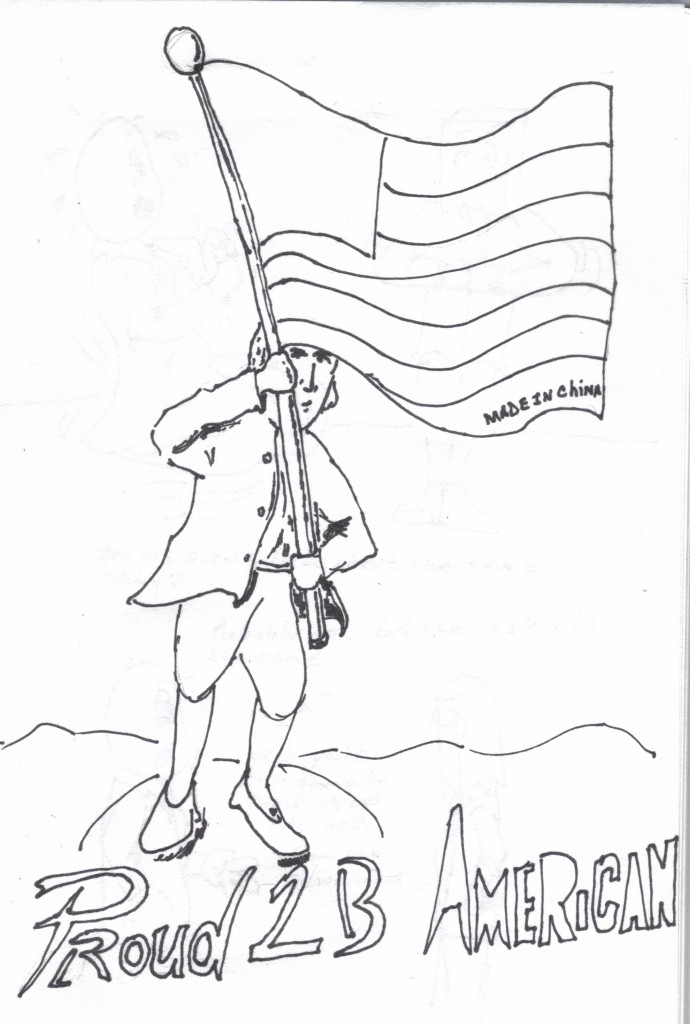 Since attacks on the World Trade Center and Pentagon, the federal government has instituted a form of martial law not only on those seeking entrance into The United States but on its own citizenry. This can be seen in the profusion of security measures at border crossings, airports and diplomatic missions in other nations.  In the document entitled “Homeland Security Presidential Directive-20 “(2), signed into law in 2007by then President George Bush Jr. Effectively surrenders the power of the Congress and the House of Representatives to the President as well as placing all domestic security under the Homeland Security in the event of a national emergency though the definition of such is not defined clearly. With this legislation, the symbol of democracy could emerge as a dictatorship in the ‘right’ conditions that often previous American Presidents have criticized other nations for undertaking.

The American government has fallen under the delusion as in the story “The Emperor’s New Clothes” that the world looks to it for leadership. Gone are those days:  Washington’s “I cannot tell a lie” has been replaced by Clinton’s “I did not have sexual relations with that woman”.  Reagan’s “fuck you all” stand alone swagger has been forgotten for Bush’s hunt for non-existent weapons of mass destruction and Obama’s preference for NATO consensus. The American government’s positions on foreign matters has become irrelevant and poses little to no deterrent to those who the American government once held fast for fear of an American response.

Perhaps it is time for the American government to be given this message: Narcissus, the time has come to raise your eyes from your reflection in the stilled water; no longer do you kneel in the forest enclave that you stumbled upon so long ago.  Civilization has built around you and it is but a sewage treatment holding pond you stare into.

The rise of Canada

For the past couple of years Canada has begun to step out of the shadow of our American monolith to the south to garner attention from the world as a country to look towards. From Chinese human rights violations, the recession to social constructs of developing countries, Prime Minister Stephen Harper and his Conservative government have orchestrated the lighting to such a degree that so brightly does it shine that the global audience is blinded to the dark etched lines that lurk in the luminescent features of Harper, “The Man Who would be King”.  How did Canada escalate from being a ‘yesman’ for American interests to being seen as its own ‘man’? Is Canada truly ready for this position?  Is Stephen Harper really a person that Canada wants to be highlighted as our leader?

Why shouldn’t Canada push to take the reins left hanging by the American Government?

Back in 2004, then Conservative opposition member Peter MacKay demanded that the public had the right to know the depth of the Canadian government’s involvement in the ousting of Bertrand Aristade in Haiti (a).  Today Peter Mackay is the Minister of Defense yet so adamant in the public’s right then today suffers from a form of apathy to where the public’s right to know about torture allegations in Afghanistan is being muffled (3,4) by the Harper government. It should be noted that the question of Canadian involvement in the instrumentation and implementation of the overthrow in Haiti still has remained under government secrecy. The Harper government has publicly denounced China’s human rights issues, yet it does not want scrutiny of its own human rights issues – is this the kind of accounting that the world should expect from a country in a  leadership role?

On Aboriginal issues the Harper government has made some positive results, formally apologizing for the abuses that took place and creating a compensation package for those impacted by the residential schools. There is, however, one point that the Harper government did not explore – the legal responsibility the federal government had for its actions in the matter.  There should have been an examination of the former Liberal government’s decision only to adopt 4 of 5 definitions of genocide in order to absolve its past actions (b). Current issues that the Harper government have been less than ‘hospitable” to the native cultures in Canada are the exclusion of the Inuit population last month in talks about the future use of the Northern territories for, lack of a better word, exploitation.  There are health issues (b) as well as unresolved land claims in almost every province and territory that have gone on unresolved for decades.  How can the world be expected to see a Canadian agenda for its populations when the government refuses to act on the problems that are within its own socio-political sphere?

Since the writing of the article,” Canada’s Prime Minister and Incongruence of the Universality of Access to Reproductive Technology”(c), the position of the Harper government on abortion not only globally but domestically has become a political issue within the both the House of Commons and the Senate.  From a Conservative senator, Nancy Ruth, during a meeting of international women’s equality rights groups on May 3, 2010 said, “We’ve got five weeks or whatever left until the G-8 starts.  Shut the fuck up on this issue.  If you push it, there’ll be more backlash.  This is now a political football.  This is not about women’s health in this country…Canada is still a country with free and accessible abortion.  Leave it there.  Don’t make this an election issue” (5).  The following day, Match International, a women’s rights group, accused the Harper government of cutting funding for 11 women’s groups that were pro-abortion(6).  The government response was that the groups (revealed on Wednesday to be 24 in number) were “inefficient” though it should be noted that these groups were ideologically opposed the Harper stance on the issue. If the Canadian government is giving the impression to its own populace that it has little regard for issues in Canada, can the world be expected to see anything else but hypocrisy? 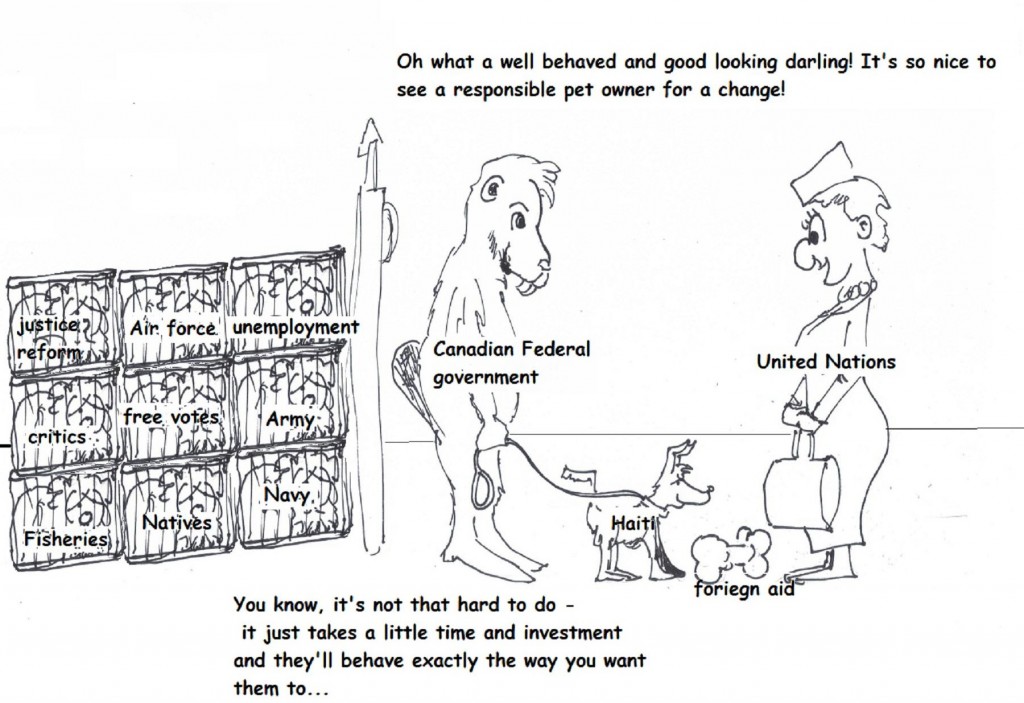 The International Monetary fund proposed in late April a “Bank Tax” that has the support of the majority of the G-20 countries, with Canada arguing the loudest against the idea of having an external collection agency of national bank’s business(7). This tax would allow countries to ‘recoup’ a percentage of losses incurred in the case of an economic downturn.  The Canadian government, as well as Japan and Australia, have argued that since banks in these countries did not require governmental help for stabilization purposes, they should not be ‘penalized’.  The share of the Canadian national debt that each Canadian has is $15,422.56 and growing (8) – is there not a percentage of this from irresponsible practices of banks that do business on behalf of the Canadian government?

There is a void in global politics of a unified strong Western voice, Stephen Harper in his attempts to push Canada to act as the filler, has only shown that Canada is not a suitable candidate for this position. Canada is a relatively young country compared to the majority of the world’s political powers but unfortunately the sperm and egg that created this land are from old European politic/colonialistic blood.  Canada is also at a disadvantage with the current state of its federal politics: the Conservative Party is in power because it has had one of the three opposition parties siding with the government.  If the Conservatives lose that support, the government will fall, that is the way of minority governments.  It is by grace that the Liberal Party does not have a leader that projects confidence in governing Canada to Canadian voters that there has not been a serious confidence vote in Parliament. It is not time for Canada to step up; currently there is no country in the West that is a viable candidate.  Stephen Harper has to be made to understand that the world is not as it was when Canada was created; technology has made distance micro-management impossible to regulate a foreign country through regents and surrogate policing agencies.  The world is too ‘close’ for the people’s voices not to be heard, there can not be a denial of being unaware.

Stephen Harper, accountability means being responsible, responsible means providing answers though the answers may not paint the brightest of pictures. Canada is walking in a soiled diaper – no one is going to pick it up and embrace it until, as the leader of this country, you clean all the shit up….

By A. B. Thomas The political, social and economic landscape of Earth is the wax that surrounds the wick of human existence.  That wick, for the better part of two centuries, has been burning hungrily with the excessively oxygen rich atmosphere of technological advancement.  The wick has gotten to the point where the wick has…

The Sinking of the Frigate Cheonan