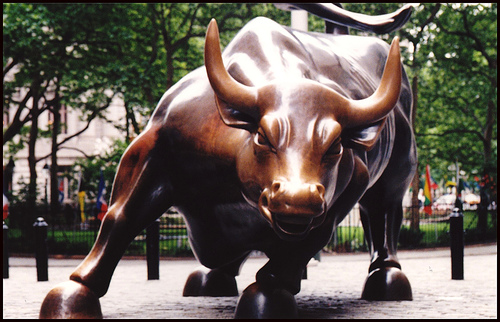 Editor’s Note:  We generally like to include a short bio with our first time writers, but Troy reveals much of who he is in this pertinent observation of Wall Street.  I believe our readers will enjoy the keen wit and commentary style as much as I do.

What I know about Wall Street couldn’t fill a thimble.  I can’t tell you the difference between a derivative and a line drive.  My best knowledge of this boulevard of broken promises is that I’ve walked the entire length of the street, from Broadway to South Street.  I have come to learn that when there’s a snowfall in New York City, and most of us have piles of drifts to navigate, this block called Wall Street is immaculate.  It’s as if with divine inspiration, all snowflakes evaporate.  Some folks have suggested that there is a magic chemical placed underground that wipes away the horrors of winter inconveniences.  But I suggest it’s the city’s snowplows that make Wall Street their prime target before you and I can find a path to travel.

I recall a decade or so back, during the reign of King Rudy the First, the Sultan of Giulliani, taking umbrage at the food carts assembled on Wall Street’s sidewalks.  They were mostly run by newly arrived persons – dare I call them immigrants and endanger their safety – and these men and women who provide soup and sandwiches for the rushing parade of traders, hedge funders and their associates; they did and still do provide a real service. Rudy the First wanted the sidewalk traffic to flow and he went to war with these vendors. At the same time I became aware of chauffeured limousines double-parked, often extending onto the sidewalks of Wall Street. Their presence was a real challenge to the flow of this boulevard, but Rudy with his traditional bully-like manner, chose carefully  who to take on. Would it be the unorganized vendors, most of whom are living day to day?   It certainly wasn’t the well heeled limo owners, men who most likely were big givers to political campaigns protecting their interests, to say nothing of their parking privileges. So I view the current hearings in Washington, D.C. with a layman’s perspective.

What I’ve learned about Wall Street and Goldman Sachs, and others who inhabit this neighborhood, is mainly from an essay I read in the Wall Street Journal. I was attracted to the headline. It screamed at me. It said, “Greed Is Good,” and I said to myself, “Well Ayn Rand has won.” The article outlined the incentives and the building of America inspired by greed. It was particularly poignant to someone like myself who has spent most of his adult years working with men and women who have been released from prison, suggesting to them that there’s another way of surviving in our society; first finding respect for yourself and then in turn for others. When I read that “Greed Is Good” essay, I recalled hearing tapes on a radio station about a few middle management Enron employees (remember Enron?), men definitely on their way up the corporate ladder. On those tapes, two men were plotting how to make huge profits at the expense of investors, and they chuckled dismissively at the havoc they would cause in the lives of others as they would get theirs. A perfect example of greed is good. 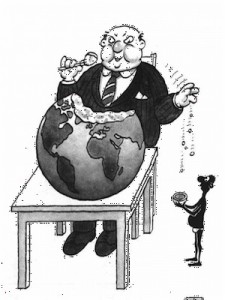 I try to find some reason, an understanding, in the duplicity that I see in the two worlds that exist. In the Off-Broadway play “The Castle,” the true story of four people who served time in prison, Kenny Harrigan reveals that he served 16 years in New York State prisons charged with two burglaries, acts he performed to support his drug habit or to eat. He came to the Fortune Society, an organization that works with people who were formerly incarcerated and where I teach two nights a week, and reclaimed his life. He’s now a counselor working with young kids, and he’s a Sunday School teacher, and in addition to appearing in “The Castle,” he volunteers his time for worthy causes. He was deprived of 16 years of his life because he took things not his, and not justifiable. But I measure Kenny’s life with the men now testifying before Congress, whose greed is good philosophy. and who are responsible for hundreds of thousands of Americans losing their homes, and in many cases, their life savings. The charges against Goldman Sachs are civil, not criminal. Funny, I always thought that Kenny’s charges should have been for medical treatment, not imprisonment, because of his drug history. 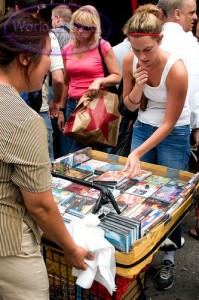 Looking at Wall Street I think I’m sufficiently informed now; politically at least; to recognize that a bailout was necessary for an immediate need to stop the hemorrhaging, and the banks going under would hurt everyone. But quite frankly, now when I watch the Cable Television Channels that reveal the Wall Street traders and screamers, I wonder what they contribute to this planet. What good do they do to society? They holler on phones, and they shift paper, and they make big money. But I suspect if we scrapped western civilization as it now is, and began all over again with a new blueprint, we could invent something more effective than Wall Street as it now exists. We would need doctors, engineers, teachers, scientists, and radio announcers; which would all be on my list for vocational survival. But I don’t see the need for the current high rollers, the hedge funders, who make no significant gift to modern society, other than their own profits. Change will be difficult to implement since most members of Congress are recipients of Wall Street dollars for their re-election campaigns, and that rather pollutes the waters and makes mockery of my Utopian blueprint.

I get the feeling that there are people who have an investment in keeping everything exactly the way it is, because they exist off of greed is good, and I’ve got mine, so screw you! That’s not the world I want to live in, but we make the best of it as we toil along. The bottom line is, if you follow the money almost everything will be explained, particularly the vendors on Wall Street.

Troy J. – I wonder what they contribute to the planet. They holler on phones, and they shift paper, and they make big money.

The Gulf of Mexico Oil Spill – The End Of the World As We Know It?