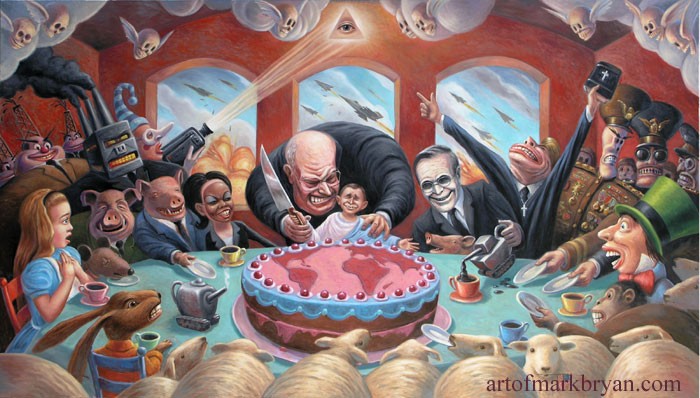 As President Obama seeks to broaden the curriculum taught in our schools and restore America to a respectable level of intellect, my own dear state of Texas seems to have decided against the education it once held dear and speak out in favor of ignorance. The Huffington Post states that Texas Teachers will be required to cover the Judeo-Christian influences of the nation’s Founding Fathers without highlighting the philosophical rationale for the separation of church and state. The New York Times states that “Republicans on the board have passed more than 100 amendments to the 120-page curriculum standards affecting history, sociology and economics courses from elementary to high school.” It would seem that the plan is to make Texans as big a bunch of babbling idiots as the transplant from New Haven, Connecticut proved himself to be in the highest office in our land.

George W. Bush’s “No Child Left Behind” act sought to narrow the spectrum of subjects taught in our public school system.  The goal was  to fit everyone into a mold that would fit his ideology of what constitutes productivity. The No Child Left Behind: A Parent’s Guide Introduction and Overview section admits that its purpose is to “…change the culture of America’s schools. “ It sought to undermine the arts and pass them off as unimportant and unworthy of being considered a scholastic endeavor or a profession worth pursuing. Rather, it sought to make mindless drones who would work in the factories, refineries, and chemical plants and give no thought to the beauty and wonders of life which money cannot buy, and did so under the pretense of being Christian. Its report cards included grading on such things as race, ethnicity, gender, English language proficiency, migrant status, disability status and low-income status, creating a haven for bigotry. Money became their God and godlessness in the name of Christ followed. Churches sprang up teaching that if you love Jesus, you would become monetarily rich; that if you were not getting monetarily rich, you were not following Jesus sufficiently. This is in direct contrast with the teachings of the Bible and the New Testament Jesus they claim to follow.

It seemed that as long as the name of Jesus was spoken, it was alright to kill your neighbors and steal their property as long as it increased your physical prosperity. It became acceptable to hate your neighbor for his or her religious beliefs and sexual preference despite Christ’s teachings to the contrary. How “turn the other cheek,” “love thy neighbor as thyself,” and “God did not send his Son into the world to condemn the world, but to save the world through him” could be interpreted as “kill those who have differing beliefs,” “kill the fags,” and “hate those who embrace education” is unfathomable.

Although Jesus and his apostles were poor, they were not uneducated. They were bi-lingual or multi-lingual and could read and write. Even women of the Bible were afforded education in such things as medicine and… God forbid… MUSIC! The Holman Bible Dictionary states; concerning the education of women;  “She learned about such things as dietary laws which had to do with the family’s devotion to God. Girls learned the practical side of the laws the boys studied.” In honesty, the Jews of the time were better educated than our current population, yet David Stokes of Townhall.com writes, “Basically, a Gnostic is a puffed-up know-it-all who has greater powers of insight and discernment than mere mortals. And in political terms these “best and brightest of the best and brightest” flock together just knowing that if they could run things the way Plato envisioned in his Republic—in other words, as a great big, all-seeing, all-knowing, political aristocracy—the world would be a better place.” He attacks the educated and liberals from the beginning of the article dredging up the Soviet Union and the Cold War, pointing out that their “socialist system” had “provided for them—from housing, to, yes—health care.” He confuses Plato with Socialist Russia and ties them in with anyone with a “progressive” mindset and an education. He applauds George W. Bush and wrongly reminisces about President Bush creating smaller government. He points out the way he feels about the future if, “all the socialist machinations in the hopper actually become the way things are in this country,” with a reference to Sheldon on the TV sitcom, The Big Bang Theory. The quote was, “I believe the appropriate metaphor here involves a river of excrement and a Native American water vessel without any means of propulsion.” Clearly, he’s proud of getting his education from television sitcoms.

Conservatives in Texas have succeeded in lauding Ronald Regan for reducing government in spite of the fact that the GDP grew during his administration at an annual rate of 9.4% per year. References to Ralph Nader and Ross Perot are to be removed and the Confederate general, Stonewall Jackson is to be taught as a role model for effective leadership. The ideas in Jefferson Davis’ inaugural address are to be laid side by side with Abraham Lincoln’s speeches. The Los Angeles Times states, “Producing the next generation of Reagan worshipers is one thing, but the Texas Board of Education may go a giant leap further: Social studies textbooks may cast Abraham Lincoln and Confederate President Jefferson Davis (a traitor to the republic who nevertheless has his own statue in the Capitol) as moral equivalents.” This will undoubtedly make “Teabaggers” hold Texas in high esteem as these changes to Texas education seem to embody all for which they stand.

In an effort to counter the “Teabaggers,” a group has started calling itself the “Coffee Party” in an effort to combat the “Tea Party” tactics. The “Tea Party” must consider them a threat because WorldNet Daily has published an article by Drew Zahn to call the Coffee Party a miserable failure, giving it an “F” rating. Clearly, the country is polarizing and media tactics are continuing to heat up. It is shaping into the anti-education crowd vs. the pro-education crowd, the warmongers vs. the peace lovers, the attack crowd vs. the discuss crowd. Profession of faith to a religion without even understanding the concept of religion is not only becoming more dominant, but the accepted practice.

While trying to point out to a Tea Partier that Bush was responsible for the banking loans and the oil company atrocities, not Obama, whom she was attacking with bible verses, the Tea Partier became extremely defensive. She said that she considered my showing her the bible verses in context and presenting my own bible verses, which disproved her narrow view of Jesus, harassment. She was happy to quote verses which seemed to suit her position, but became indignant when I pointed out a gentler, more relevant doctrine. She then hurled insults about my financial status, my educational status, and tried to take a dominant position. What she did not do is present a valid or logical argument to support her position. Trying to reason with her proved impossible.

Obviously, in her mind, pointing out that George W. Bush was responsible for the bank bail-outs, pointing out that Jesus wouldn’t smile too favorably on urging violence against Obama, and showing her bible verses to point out the error of her thought is considered, by her, to be harassment of women. This shouldn’t be surprising since people of this caliber understand very little of what they speak. It’s a sad show of the decline of education amongst Christian conservatives. It seems that many of these people are ruled by paranoia, anger, and rage, and an almost fanatical devotion to Sarah Palin.

The affects of narrowing the subjects taught in the classes is already readily apparent in the members of these conservative Christian groups. Can we expect to see a new Dark Ages on the horizon complete with Spanish Inquisition-style brutality? Will a new Age of Enlightenment try to counter? Will both sides extinguish one another catching many in the crossfire?

Space Eagle-As President Obama seeks to broaden the curriculum taught in our schools and restore America to a respectable level of intellect, my own dear state of Texas seems to have decided against the education it once held dear and speak out in favor of ignorance.

Like shooting puppies: Guatemala’s Iran-Contra war on the Mayans