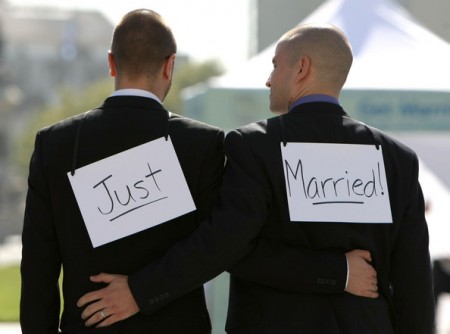 Finally, and without much fanfare nationally, the city of Washington D.C. has joined the few other areas of the United States in which same-sex marriage is now legal; Massachusetts, Connecticut, New Hampshire, Iowa and Vermont. The battle for equal civil rights in respect to matrimony for gay and lesbian people was won and then lost again in Maine and California. In both of these States, gay and lesbian people saw a previously recognized right given and then stripped from a minority segment of the population by plebiscite for the first time in modern history.

As committed same-sex couples begin to enjoy the right to enter into civil marriage, there is still an under-current bubbling its way to the surface in the Nation’s Capitol. A suit was brought by a religious group to force a Stay that would allow their case time to be heard by the Supreme Court and reverse the decision by D.C. officials to reject a proposal for a referendum. If it worked in California, then….” But the Supreme Court denied the stay and the law is now in effect. Be cautious though, if you think we have won any friends on the High Court. The opinion of Chief Justice Mr. Roberts pointed out that this same religion-led group is behind a suit that is now being heard in Washington D.C.’s high court that if won by the petitioners, would force a plebiscite on this same subject. The Supreme Court, according to Mr. Roberts, could very well be hearing the case if the decision of the lower court proves to be unsatisfactory to the petitioning group.

Bringing the suit to the Supreme Court could determine whether any judicial ruling by a lower court in favor of same sex marriage would be able to be implemented without a popular vote. The Civil Rights of gay and lesbians would be effectively blocked in the United States as long as the current Supreme Court holds sway. We have few friends there.

Forty states in this union have passed laws or constitutional amendments banning same-sex marriage. The Federal Government has such a ban in the Defense of Marriage Act signed in one of his two very low points by President Clinton. (The other is, of course “Don’t Ask, Don’t Tell.”) Most of these laws on the State level have passed by popular vote, often placed on the ballot at the same time as a civic or state election. California and Maine now have such restrictions. One wonders how, in this “land of the free and home of the brave,” how could a minority segment of the population be treated so badly and so unfairly by so many of their friends, neighbors, and yes, their family members as well.

There is one emotional tie, particularly in the United States that secures a tug much greater than friendship or family connections. That tie is found in the emotional reaction of the person to the teachings of and the pressures exerted by their religion.
Bear in mind, we are talking about Civil Marriage, not any religious ceremony in any Church. Civil marriage is a right that belongs to all citizens of a State. When a minister, priest or rabbi performs a marriage, he or she is acting as an agent of the State. When he or she presides over a religious ceremony, then he or she is granted that right by his or her church. The church edifice also belongs to the religion. Any particular religion has the right to refuse their services and the use of their building, and no one questions that right. The religious interpretation of marriage belongs to the church.

But as Jesus Christ Himself said, “Render unto Caesar the things that are Caesar’s, and to God, the things that are God’s.” Religious ceremonies belong to God. Civil law belongs to Caesar, that is, to the State. Much of the rest of the world understands this. In many countries, civil marriage takes place before a magistrate and is followed by a religious ceremony if that is what has been arranged by the participants. Maybe that is why it has been easier for so much of the rest of the Western Industrialized World to have granted the rights of marriage to their homosexual and lesbian citizens.

“Render unto Caesar the things that are Caesar’s.” For years the United States has been fooling itself in the belief that there is a separation between Church and State. Any reader of American History knows that in practice, to one degree or another, this has not been true. Nowhere has this been shown as brazenly as in the battle waged in every State that has granted marriage rights to same sex couples. Churches and their representatives have joined forces with the ultra-conservative element to actively campaign against this civil right and crossed State lines to do so. They have spent millions of tax-free dollars in their quest to subjugate a minority. Groups such as the Knights of Columbus circulated petitions for signature in church vestibules. Pastors have used their pulpit to heap sermons on their members and in those sermons they manufactured a set of fears that is totally fictitious and without foundation. Gay men and women are not coming for their sons and daughters. Gay men and women, in the areas where same-sex marriage has been legalized, have not undermined or devalued any heterosexual union. Gay men and women have not forced religions to change their practices.

Finally, it should be noted that in the States and Countries that have legalized same-sex marriage, there has been no retribution exacted from God on High. Remember these same threats had been used before when many churches opposed the lifting of the odious miscegenation laws.

It seems that this whole effort by the Religions is an entry into our political processes that has to be stopped. When a Church or religion actively enters into the political process, they do so illegally as a tax-free entity. If they desire to campaign for a candidate or a law, they may certainly do so, but should that be their choice, they must forego their tax-free status. That means their property and their income must be taxed….. Not should be taxed, MUST BE TAXED!

Most Christian religions take their ownership of marriage from an almost incidental occurrence in the life of Jesus. He was invited to and attended a wedding at Cana. In the teachings of the Church, Christ not only changed water into wine at this wedding feast, but also, by his presence, sanctified marriage and made it a sacrament for his church to rule over in perpetuity. I would submit that this was, in all probability, not a part of His participation in that celebration, that He simply went to a wedding. There is no biblical basis for the various churches to intervene so vehemently. There is a political basis however, demonize a segment… make them appear to be a “lesser people” and you elevate your own people in relation to those you have made less. In so doing you secure your hold on them… and on their pocketbooks.

For now, Right on Washington D.C., may the freedom for same-sex couples marry be forever among the laws of our Nation’s Capitol.

The David-
Finally, and without much fanfare nationally, the city of Washington D.C. has joined the few other areas of the United States in which same-sex marriage is now legal.

Damn Herb and his Whores