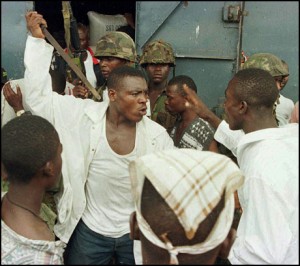 His real name is Joshua Blahyi.

He was born sometime around 1970, and had what passed for a normal childhood in Liberia during the presidency of William Tolbert. Tolbert was one of the ‘Liberian Elite’; descendants of the original repatriates during the Monroe Administration. At this point, the capital, Monrovia, had modern services (electricity; clean water; sewers) plus kept a lid on unrest.

Tired of the ‘few’ owning most of everything in Liberia (a lesson learned well from their American forbears), a Liberian master-sergeant, Samuel Doe, took power in a well-staged coup in 1980.

It was around this time that Joshua Blahyi got a phone-call.

Blahyi, a member of the Krahn tribe, had been named a tribal elder and a priest at the tender age of ten. This gave his next statements some credence, at least among the folks in the rural Liberian village in the eastern part of the country he called home.

He claims that Satan called him on the phone and told him to raise an army.

This, he did – first, among his boyhood friends; then among the surrounding countryside. What Blahyi probably didn’t know was that this was going on all over the country; small-time ‘leaders’ building power-bases which could be used to further their own economic gain through the application of military muscle.

One thing which wasn’t lacking in Liberia was firepower. Soviet and Chinese-made AK47’s could be had for US $10/each; ammunition included (RPG’s and artillery were a little more expensive). The diamond trade was in full-swing, and the local warlords who held a piece of this lucrative but destructive business made good money, in a hurry. Blahyi was no exception to this.

Now-President Doe, favoring authoritarianism, suppressed the media and arrested anyone he believed was a ‘socialist’ – which was anyone who opposed him. His methods led to a brief counter-coup after the first post-Doe-coup elections in 1985 (held to legitimize his rule; every political observer worth a damn agreed that the Other Guy had won, but Doe stayed in office anyway, his position secured by the military).

In 1989, the civil war in Liberia began. It was tailor-made for a man like Blahyi.

Blahyi and over twenty other small-time warlords jumped into the fray with their child-armies, supporting a rebel leader named Roosevelt Johnson against another man named Charles Taylor; it was then that Blahyi received one of many ‘visions from Satan’ in which he was told that to fully serve his new spiritual ‘master’, he had to fight naked.

No one in Africa leads a rebel faction without a pseudonym. Among other things, it’s far too easy for the UN to find someone later, if they’ve used their real name to commit atrocities. Also, pseudonyms are useful in striking terror into the hearts and minds of civilians, most of whom have never seen a radio, let alone a man wearing nothing but lace-up combat boots and an AK47.

There was a General Rambo (for obvious reasons). A General Mosquito (because mosquitoes carry disease, and there’s no such thing as insect-control in Liberia) was also a warlord and truly frightening character. The man who opposed him (fighting on the government side) was General Mosquito-Spray.

As odd as all this might sound, it makes perfect sense in the sociopolitical climate of West Africa – and General Butt Naked fit right in.

“So, before leading my troops into battle, we would get drunk and drugged up, sacrifice a local teenager, drink their blood, then strip down to our shoes and go into battle wearing colourful wigs and carrying dainty purses we’d looted from civilians. We’d slaughter anyone we saw, chop their heads off and use them as soccer balls. We were nude, fearless, drunk and homicidal. We killed hundreds of people – so many I lost count.” – General Butt Naked

The first civil war ground on until 1990, when several African national organizations and the U.N. intervened to put an end to things. A subordinate of Charles Taylor, Prince Johnson, captured Doe outside Monrovia, and in a well-distributed video, drank beer behind the man’s desk while his troops carved him up, and ate him. Rumors persist that Johnson also partook of Doe; literally.

Meanwhile, Taylor’s rule was marked by more authoritarianism and mass-murder. This led to the second civil war in 1999.

The fighting, always severe, moved into Monrovia-proper in 2003, where it continued for the better part of a year. During this time, most of the city’s infrastructure was destroyed. Eventually, Taylor was deposed, seeking asylum in Nigeria. The U.N. moved in as a peacekeeping force, and the era of the warlords was over.

Our friend General Butt Naked, along with his protégés and opposite-numbers, had to find another way to make a living.

It was about this time that he received another phone-call – this time, it was from Jesus, who told him to change his ways. Blahyi traveled to Nigeria, where he attended a ‘seminary’ and received a ‘diploma’ – returning to Liberia, Blahyi founded the End Time Train Evangelistic Ministries.

In testimony to the Liberian congress in 2008, Blahyi stated that he and his men had killed no less than 20,000 people, but that ‘Satanic influences’ had driven them to this, and that they could not be held responsible.

At this point, there are no plans to do more than let the former General Butt Naked shuck-and-jive his particular brand of Christianity – and while most believe that Blahyi is doing this to avoid war-crimes indictments, the locals seem to have largely forgotten the crimes of a teenager during the Liberian civil wars.

Especially one who fought butt-naked.

(Financed by the Sundance Institute, a documentary entitled “The Redemption of General Butt Naked” is scheduled for release in 2011)

W.D. Noble-From cannibal warlord to evangelist – only in West Africa would this make sense.

Slowly Slipping Into The Sea

After The Health Care Debacle – What Now For the Republicans?