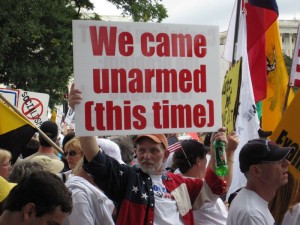 With the health-care debate entering a new phase due to the passage of the bill, the Right – as led by the Republican party – has, in turn, raised the twin-standard of misguided patriotism and religion on-high. Last month, the online political magazine DailyKos released the results of an independent poll of some 2,000 self-identified Republicans. The results were shocking in the extreme to every one of my Progressive/moderate friends –  but not to me.

The Daily Beast’s John Avlon discusses a similar poll in an article released this week – this one was conducted by Harris Group at the height of the health-care debate last week (again, over 2,000 people with a margin of error that’s plus-or-minus 2%) – and the results are the same. Again, they were no surprise.

In prior articles here, I’ve pointed out the dangers of the Republican party and its bedfellow, extremist Christianity – not the party I remember from the days when my parents were both members, and the concepts of Eisenhower conservatism still held sway – not even the party of Richard Nixon, which, while Nixon himself was corrupt, also gave us the EPA and the first glimmers of the concept of national health care.

I’m speaking of a Republican party which has been co-opted by the extreme religious right – a party which is controlled not by reasonable people, but by religious puppet-masters, accountable only to their notion of ‘god’.

Both the Kos poll and its followup as reported by Avlon underscore this issue well. Some of the results are here:

What should leap out at you from these partial results is the overt racism and homophobia of the respondents – plus the 23% who believe their state should secede from the Federal union outright.

Fully 67% believe that the ‘only way to “heaven” is through Jesus’. 77% believe that the Christian/creationist view of the beginning of the universe as explained in the book of Genesis is the only view which should be taught in public schools.

Scariest of all is this — 24% of Republicans – and 14% of Americans, overall – believe that Obama is the ‘antichrist’.

Not Your Backyard Tea Party

The Tea Party, fresh from a convention which featured input from Eagle Forum (Phyllis Schlafly’s organization, which has advocated “family friendly” actions such as rolling back Roe v. Wade; making the Ten Commandments an integral part of American law, and establishing ‘border security’ to prevent ‘third world diseases’ from entering the United States), and VisionAmerica (which seeks to politicize religion across the country through the efforts of extremist pastors nationwide), didn’t waste time telling the nation last month that they were (in the words of keynote speaker Sarah Palin) the “keepers of conservative values and good works.”

The Tea Party movement is now viral. With nearly 80% of Americans self-identifying as ‘Christian’, this is a huge power base from which to draw – and with their philosophy being based on ‘god’ and money, they are drawing support from some of America’s wealthiest Conservatives.

Combining a religious core – with arguments impossible to counter by reason and logic – and a wealthy power base which is all too willing to contribute because the core is literally preaching a gospel of ‘prosperity’ to those who serve “god” (read: ‘take the country back for Jesus and the conservatives and “god” will bless you, financially’) – and you have the makings for a genuine theocracy.

We dismiss them, however, at our peril.

Health Care and the Republicans

Nothing has driven the Republicans into the arms of the extreme Right more than the issue of health care.

The last poll taken prior to this week’s vote was too close to call – literally, within the margin of error. Americans are divided – polarized; even – over the concept of health care reform. The defeat earlier this week of the Republican agenda, however, is far from a victory for Obama and the progressives.

“We need to defeat these bastards,” said Rush Limbaugh on the passage of the health-care bill. “We need to wipe them out.” This rhetoric is echoed by most of the mainstay conservative pundits.

The second tier is just as vitriolic, if reflective of their lack of education. “This is an ‘ism,’ ” said John Gambling of WOR radio in New York City. “Communism, socialism, fascism, whatever you call it, that’s not what this country was designed to be.” No one contacted Mr. Gambling to inform him of the fact that the three ideologies he mentioned are vastly different things, with different governmental systems, goals, and outcomes.

Such technicalities are not of much concern to the average ‘hatriot’ (a word coined by Avlon in his book, “Wingnuts – How The Lunatic Fringe Is Hijacking America”). In point of fact, a lack of education in general seems to be a prerequisite for belief in conservative wingnuttery – the same Harris poll quoted earlier found that ‘…education is a barrier to extremism. Respondents without a college education are vastly more likely to believe such claims, while Americans with college degrees or better are less easily duped. It’s a reminder of what the 19th-century educator Horace Mann once too-loftily said: “Ignorance breeds monsters to fill up the vacancies of the soul that are unoccupied by the verities of knowledge.“….’

While the White House is clearly not worried about such challenges (Article I; Sec. 8 of the U.S. Constitution allows for Congress to pass legislation which, among other things, provides for the ‘general welfare’ of the United States and its citizens), this isn’t stopping at least sixteen state attorneys-general from filing lawsuits against the passage of the health-care bill, citing failure to fund the program and the requirement that citizens begin purchasing their health care starting in 2014, or face an IRS surcharge.

The Tea Partiers? They’re behind these efforts – along with anything else which might serve the New Republican Agenda.

The agenda? It’s working itself out – in a process eerily similar to the beginnings of revolution.

“Republican Gomorrah – Inside The Movement That Shattered The Party” – (Max Blumenthal; Nation Books – 2009)

18 thoughts on “After The Health Care Debacle – What Now For the Republicans?”