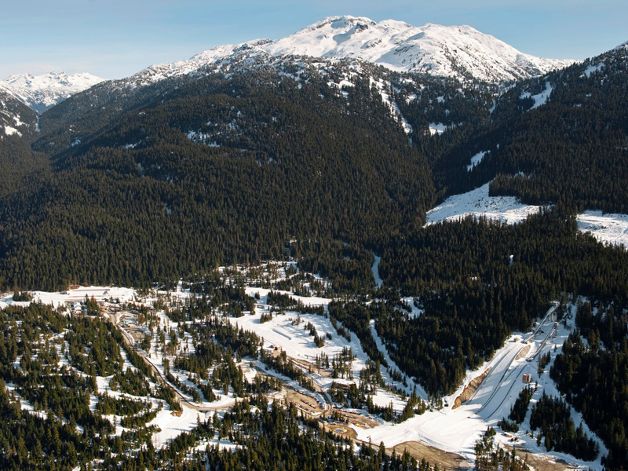 Mae West once said, “I used to be Snow White, but I drifted”.  Her words could applied to Canada’s winter weather this year, as well.  There have been a few short bursts of chilling weather here and there but not the continuous deep freeze that happens.

It has been particularly playing havoc with the Winter Olympics being held in British Columbia.  There has been an absence of precipitation mixed with warm weather, along with the occasional rain shower that has impeded the illusion of winter in that province. They have had to fly in snow from higher elevations in order to have enough snow for the events held out on the two mountains.  To be fair though it must be pointed out that in Vancouver snow has always been a rarity, their idea of a blizzard is having a light dusting of snow that stays on their roads for longer than twenty minutes – a sure sign, according to most Vancouverites that the Rapture has thus begun.

Such is not the lot for those of us who live in the prairies where frigid weather is accepted as the norm for our winter.  In Alberta it is a tradition that the male of the species says “good-bye” to seeing his testicles from the middle of  October until the last week of May as they winter in Arizona with only a postcard from them every now or then with “Wish you were here – not!”  This year has been unsettling; Halloween night has always been cold with either snow on the ground or snowing.  This year Halloween was marked with rain showers.  For the past few months it has been warm with a few cold bouts then back to the warmer weather resulting in very low precipitation amounts.  Take the past week: Friday, the 12th of February we had a high of 0, the following Sunday the high was -7 but with a wind chill that took the temperature to -19 with snow.  Monday the wind was calm with a high of -2.  Thursday the 18th, the high was 2 and the projection for Saturday is set at 6. Our testicles are getting frequent flyer points galore this year.  The cause for this weather, of course, is global warming.

There have been a lot of things said about global warming, all of it bad for the most part.  But is it really something that is that dire or is it more of a monetary and political game being played at the expense of the average citizen of the world?  Who directs the thought process of it?  The media has played a large role in propagating global warming through their investigative reports and meteorologists.  Where do meteorologists get their information?  From scientists who whore themselves out to those who have the money to fund their research which comes from companies and government.  When it comes down to the fine thread of logic though, it is we, the public, who has to pay for the funding through taxes or through our consumerism.

Scientists need to provide food, shelter and the basics of a higher end quality of life for their families, hence they need funding.  Funding comes from creating enough public fear that the government throws money up and different think tanks and research facilities snatch it up.  The reasons scientists give for global warming are theories based on observations and historical records.  They base everything on the assumption that their resultant theories are infallible.  Theories, however, are unproven fact.  The fact is the polar caps are melting.  The theory is that pollution and the gases it creates are the major source which overplays the human factor over what could possibly be a natural cycle.

Scientists are notorious for their theories.  The theory of evolution states that something momentous happened, a great upheaval that turned Earth from a lifeless mass to having a climate with the capability of sustaining life.  Dinosaurs were wiped out by either a meteor that created climate change and wiped them out, or the climate change happened naturally.  Scientists theorize that there was a major climate change to create the ice age and then another one to reverse it.  The theories all deal with drastic climate changes, could what’s happening today be akin to it?  Could this be all one great big coincidence?  Could all the instruments and equations scientist use be utterly wrong or misleading?  Don’t know, couldn’t tell you.  However people working in this field have a tried and true way of dealing with proof that their theory du Jour is wrong.  It usually goes something like this: “Hmmm, didn’t think of that.” or “Ha ha, oops, my bad.”

Scientists are unable to comprehend the ““WDkN” (pronounced “wee-din”, short for “We don’t kNow”) factor into their equations.  WDkN somehow escapes from being inputted into the complicated theorems that are developed.   Scientists are the same people who say man descended from apes.  I think that is pure drivel.  We run ourselves into the ground, giving ourselves heart attacks, depression, and violence against others for no other reason than a brand name label.  Apes sit around scratching their asses, grooming and throwing feces when upset; which is the more highly evolved?   Hard to tell.  Besides, we are talking about the same group of people that I suspect, if it would increase funding from some bottled water company to them, would push for the warning label on condoms “Caution the use of the product may result in a sudden loss of fluid – drink “Weepy Water” to avoid this”.  This would lead some other white coated funded by a different company to push for a warning on “Weepy Water” that over-use of that product could result in frequent urination.

There’s not much I can say about the media.  The media gives us what we want; social outrage, panic, sadness; whatever emotion it needs to pull to get us to read, listen or watch them in order to make a buck.  If a politician can give a ten second sound bite that sounds alarmist,  it’s front page news.  If a scientist can give say something that doesn’t sound like, “Let me toss a coin in the air and pull something out of my ass.” the media runs with it. We the public created what the media issues out, so the media is only a reflection of what our entertainment values are at any given moment in time.

Reality check:  What made the front page?   A story about two “Survivor” contestants who had ‘relations’ before the latest television offering or someone holding the door open for a woman at the local grocery store?  If the latter was the headline, would you have even given it a glance?

This year the winter has not been a traditional Canadian winter.  In the spring the farmers will not be impressed with the lack of moisture for the crops, the Winter Olympics Committee will report that the games will cost the Canadian tax payers far more than they first estimated.  Next year the winter could be warmer or perhaps Mother Nature over the summer will get a hymenoplasty to return to her former frigidity.   It may be that scientists “Gasp!”  will announce that it isn’t the depletion of the ozone layer that is causing the Earth to warm but the Nazca tectonic plate has shifted a 32th of a degree allowing an escape of the molten core of the planet to vent out at an alarming rate, which needs to be immediately fixed by governments throwing billions of dollars into research to make a tube of Super Glue™ the size of Costa Rica or the planet is doomed.

Regardless of what happens, we in Alberta have a saying, “If you don’t like the weather wait five minutes.”  WDkN, baby, that’s all people need to say, WDkN.

By: Neonorth-
Mae West once said, “I used to be Snow White, but I drifted”, her words could applied to Canada’s winter weather this year as well.

Katmai Bears: the Pinup Stars of the Cook Inlet

My Non-Fatal Vacation at SeaWorld