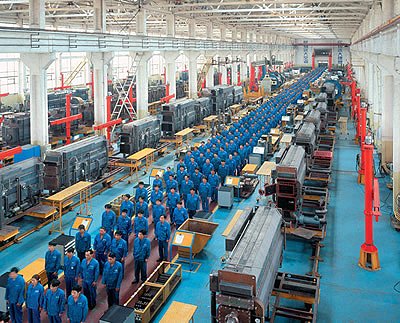 It’s been said – with some justice – that the highly industrialised nations, the so-called First World (which is a term I particularly detest, but that’s something for another discussion) aren’t solely to blame for the current levels of emissions that all but the wilfully self-deluded agree are at least aiding, if not causing, global warming. It’s been said that nations like India and China need to do as much as the rich western countries to reduce emission levels.

It’s perfectly true that rapidly industrialising nations like India and China, which are burning fossil fuels as fast as they can be ripped from the ground and aren’t overly concerned with the environment, bear a great part of the responsibility for global warming. It’s also true that they make some kind of sense when they claim that the West is being hypocritical; the rich nations became rich by wantonly destructive environmental practices and exploitation of colonies, and only now, when they are rich, can they afford to talk of environmental protection. (For an illustration, one needs look no further than the modern American love affair with whales. Anyone who ever read Moby Dick knows of the US’ own history of ruthless and systematic whaling, which lasted till the 1950s and only waned when there weren’t any longer sufficient whales to hunt profitably.)

In its essence, what India and China claim is simple: first, economic growth is incompatible with environmental concern; second, that they have a duty to their citizens to grow economically far and fast enough to provide their people a reasonably high standard of living; and, third, that per capita, their emission levels are still much lower than those of the West.

Most thinking people would agree that it’s a travesty of justice to deny so-called Third World nations a chance to achieve decent human standards of living while their “betters” live as though there was literally no tomorrow. That’s understandable. It’s also perfectly true that when you think about it logically, the India-China line of argument is a load of plausible-sounding goat manure.

It’s a load of goat manure for the following reasons:

First, because the planet, as a whole, isn’t compartmentalised. India and China can’t claim that they can do whatever they wish in their own territories, because the effects of what they’re doing are felt worldwide. An analogous situation would be that of the householder who claims he has a right to burn old tyres in his own yard. He can claim that, but the stench and smoke will permeate the entire neighbourhood. Therefore, India and China can claim till the cows come home that they have a right to put economic growth above the environment, but since their actions damage the environment of the entire world, the argument fails.

Secondly, India, at least, has done absolutely nothing to provide its citizens with a standard of living commensurate with its achieved level of economic growth. China, too, has seen rising income disparities and social divisions, but nothing like that of India, where a tiny ultra-rich minority lives as though in a different universe from the rest of the population; while the poor are poorer than ever before, in both absolute numbers and in living standards. Nobel Economics laureate Amartya Sen had noted several years ago that there were now two Indias, one that lived like California while the other wallowed in such abysmal poverty that it would put sub-Saharan Africa to shame. The brand-new Asian Tiger, India, now occupies the 148th rank in the world in the Human Development Index.

Then, again, nobody, as far as I know, can satisfactorily define what an adequately high standard of living would be. I don’t know about the Chinese, but for the Great Indian Muddle Class, the standard they aspire to is that of the US. This doesn’t mean that the Muddle Class wishes to live as Americans actually live; it wishes to live as it imagines Americans actually live, an idea gleaned primarily from soap operas and Hollywood films. The reality of the wasteful American lifestyle is horrible enough as it is – it’s been estimated that if everyone lived like American citizens we’d need the resources of six more earths to get along…until they ran out, of course.

I somehow don’t think such aspirations are worthy of encouragement.

The third red herring is the notion of the low per capita emission. It’s quite true that per capita, India and China produce less carbon dioxide and other pollutants than Westerners. It’s also perfectly true that India and China put together have more people than the rest of the world combined, so – if you calculate the total amount of pollution they produce – they do more than their share of damage. Why they have so many people is something for another day’s discussion; the fact remains that they do.

The fact remains, though, that however illogical and dissimulating the Indian and Chinese position on emission control is, it’s not going away. Neither of these two nations, especially India, is going to make any significant effort to reduce pollution levels in the foreseeable future. And India, at least, seems to have chosen the worst of American practices to emulate, especially by promoting and encouraging private transport and mass car ownership instead of cheap, safe and convenient public transport. The vehicular haze that hangs over any Indian city by mid-morning has to be seen to be believed.

There are two other, and less obvious, dangers associated with the Indian and Chinese position on this subject. The first is the effect this has on other “Third World” nations. If India and China can continue chopping down their forests, belching forth factory chimney smoke, damming and polluting rivers to death, and so on, all in the name of economic progress, why should they, the erstwhile peers of these nations, continue to remain in poverty? Why shouldn’t they go the same way in ruthless economic growth at all costs? Can you imagine the consequences if every country from Angola to Papua New Guinea, from Paraguay to Haiti, began acting as far as they could like India and China?

The second danger is the fact that this position encourages climate change denial. Recently I read some British writer warning gloomily that giving in to “global warming scaremongers” meant British people would be left without power for their computers and heat for their houses while Indian and China, who “had the common sense to ignore the whole rubbish”, forged ahead. However stupid this attitude sounds, it’s true that global warming deniers are growing shriller by the day, and that in the propaganda war they’re winning. People will prefer to believe comforting lies rather than cold truths any day. It’s immensely more satisfying and happy-making to believe that scientists in the pay of unspecified evildoers are conjuring up a spectre of global warming rather than admit that one will have to make drastic changes to one’s lifestyle if one is to survive at all.

(Note to reader: I believe global warming is happening, and that it’s primarily to entirely caused by human activity. I also believe that we are rapidly – very rapidly – approaching a tipping point of carbon dioxide concentration in the atmosphere beyond which the greenhouse effect will cause runaway warming that cannot, by any means currently known, be controlled, and that this will have devastating effects on life on earth in general and on human society in particular, including famine, mass drought, the flooding of coastal areas, water wars, mass forced migration, and general civil breakdown. I believe that global warming denial is now an organised industry. And I am coming round to the belief that it might be best to let said global warming go ahead and wipe out human civilisation. We’ve done enough damage to Mother Earth. Maybe it’s time to leave the stage. After we’re gone, believe it or not, the curtain won’t fall. Life will go on.)

Bill the Butcher – for the Great Indian Muddle Class, the standard they aspire to is that of the US.

Black Flags Over the Olympics