“The Family – The Secret Fundamentalism At The Heart of American Power 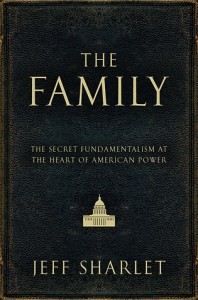 Review by The David

It is by far the most frightening book I have ever read, yet, it is also one of the most compelling. For those who believe in the separation of Church and State, for those who believe that a take-over by any religious group is a danger to us all, “The Family” provides a look at what is really happening not only in Washington DC, but all over the world.

What do Dwight Eisenhower, General Costa e Silva, Billy Graham, General Suharto, Park Chung Hee, Doug Coe, James Baker, George H.W. Bush, George W. Bush, Carlos Eugenios Vides Casanova, Richard Lugar, Mark Hatfield, John Stennis, Sam Brownback, Charles Colson, Ted Haggard, Conrad Hilton, Bill Nelson and Dan Quayle have in common? They are all members of The Family, prayer cells established by The Family or, politician or despot, they all received the benefits of The Family’s Influence. There are many, many more. Like a giant octopus, the tentacles of this monster have invaded the world over. This influence had its start with the first President’s Prayer Breakfast, this annual politico/Christian assembly that later became known as the national Prayer Breakfast where power is blessed and worshipped along with the “American Jesus.”

The Family’s Influence extends into the halls of Congress, and, as in the case of the last President Bush, into the White House itself. The members of the Family have influenced and assisted such dictatorial governments as, among others, those that existed in Somalia, Indonesia, Ethiopia and South Korea. They are responsible for standing by and watching while the men they supported murdered thousands, if not millions, of people in their quest for additional dictatorial power. The Family has extended their influence into Nigeria, it’s members assisting in the authorship of the Bill that would make homosexual relations punishable by imprisonment, and even stoning.
The Family worships power. The concept of Jesus Christ is not as the loving, compassionate man most Americans have come to know, but rather He is seen as an all powerful strong being. He is seen as a man of great might, this “American Jesus.” And it is in that powerful guise that He is worshipped by this group. That is the key to what is worthy of support. Power is to be obeyed and not questioned. If a Despot was not “right,” God would not have given him the power he holds. Power makes him right, and it is power that must be obeyed if we are to be “good” Christian men. Women are relegated to a second class status and there they are likely to remain. Children are educated in home schooling where they are taught a version of American History that rewrites and changes the roles of the Founding Fathers, and changes the happenings to fit a preconceived mold. Christ is put as a central figure in the writing of the Declaration of Independence and of the Constitution of the United States. He is depicted as the inspiration for all of the important American Documents. To some adherents to the program inspired by The Family, the American Documents are as inspired and as holy as the Bible itself. Still further, these kids are being taught that the United States is truly a Christian Nation and it is the duty of Christians to continue the fight to “take it back.”

The schools inspired by The Family can fairly be characterized as a kind of Christian Madras. Since power and might are to be a part of what one worships, then violence in the name of Christ is not only permissible, but laudable. What a frightening world we are leaving to our children, where heroes are chosen for their ability to kill those with opposing views.

Up until the fall of the Soviet Empire, members of this group supported any and all philosophies that opposed Communism. Now, that villain is pretty much off the stage, and the effort goes toward suppressing homosexual men and women, and to increasing the influence of the American Christian Right in governments the world over. If there be anyone who does not believe that this influence is strong in the United States, witness the fact that the “Faith Based Initiative” is not only a reality, but is stronger than ever as more and more tax money is being funneled to religious (mostly Christian) organizations in this country, and the church recipients are allowed to proselytize those that receive the benefits from the charity. One can also witness the organized efforts to sway the voters in such places as diverse as California and Maine in an effort to win the culture wars and prevent the gay population from securing equal rights.
The Family does much more than just run the now notorious house on C Street.
This book is a must read for anyone who cares where their government is being taken. The infiltration by Christian Rightists has already occurred and it will get stronger unless those of us who oppose a Theocracy take up our pens, raise our voices and use our votes to stop its progress.

454 pp. book by By Jeff Sharlet
Harper Perennial, New York, 2009, reviewed by The David, The Family examines the infiltration of Conservative Christian influence in government.

Words at Play-A look inside the Nimrod Writer’s Confrence