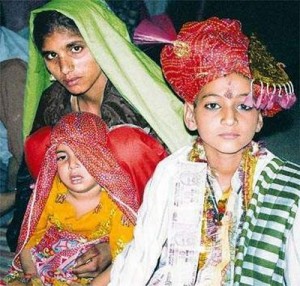 Many years ago, when a student in Lucknow, I came across a small but bizarre procession making its way through the college campus. First came a boy, about ten or eleven years old, with a red turban in his head and carrying a long, curved, sheathed, and probably fake sword. He was followed by a woman who carried a very young girl in her arms. I can’t say how old this girl was because I couldn’t see her face (it was pressed to the woman’s shoulder), but she certainly wasn’t more than four or five at the most, and an undersized four or five at that. She was dressed in something bright pink and gold, and if memory serves, one end of her pink and gold outfit was tied to the tip of the boy’s sword. Sundry other rustic-looking characters followed this trio, most of them grinning proudly.

It was the first time I’d ever seen a child marriage.

You’ll understand that I was aware child marriages existed; as the grandson of a lady who had been married off by her parents at the ripe old age of thirteen (due to which she was known as “oldie” to her sisters-in-law, the more usual age being nine to eleven) I couldn’t be but aware of the existence of the phenomenon, even though hereabouts in the east of the country it isn’t often that it still can be encountered. But in the North, and especially in the state of Rajasthan, child marriages not only still occur; they have social sanction and political protection, and have been repeatedly covered in the media.

This doesn’t take away from the fact that child marriage in today’s India is, theoretically speaking of course, illegal (I’ll be speaking on that in a minute). But merely passing a law does not usually change anything, which is why the nation with the world’s longest constitution is also among the world’s most corrupt. Still, it’s interesting to see how something everyone claims is a social evil is allowed to happen, right in plain sight. If I, for instance, had gone to the police and tried to get that child marriage in Lucknow stopped, it wouldn’t have done the slightest good.

Child marriages – unlike some other “ancient” things in India which aren’t really so ancient at all, like sexual prudery which dates back to relatively recent times – have been around a long, long time. They seem to have started in the late Vedic era (roughly about 500 BCE) when religious ritual became very important and the status of women nosedived sharply. Sexual freedom, which had been something women had taken for granted in earlier times, along with the freedom to write poetry and act as the equals of men, became constrained steadily. As Vatsayyana, the (alleged) writer of the ancient sex manual the Kama Sutra wrote, a man should marry a girl of eleven or thereabouts, just on the verge of puberty. Why? Because, women being – he said – naturally promiscuous and unfaithful, this was the only way he could ensure a virgin bride. And why was a virgin bride important? Presumably because if a man could marry a virgin and thereafter keep her from all form of unsecured contact with other males, he would ensure that the children born to her were his own.

And then, historically, of course, a “child” wasn’t what we call a “child” today. In times when one was lucky to attain the age of thirty, the need was to breed early and breed prolifically, because that was the only way to ensure the continuation of the race.

The first criterion for the existence of child marriage is the inferior status of women. Women in much of India to this day are despised and neglected. The birth of a girl is often an occasion of heartbroken sorrow, even in relatively affluent and educated families. The fact that in India a woman traditionally leaves her natal family and becomes a formal part of her husband’s family after marriage means that to the traditional Indian family, a girl is a useless burden. Every penny spent in educating and feeding and clothing her is a waste because ultimately she’s going to be given away to another family, which will glean the benefits. Therefore, the faster one can get her married, the less one has to waste on her.

Alongside this is the phenomenon of dowry, which like child marriage is illegal but which, also like child marriage, enjoys social sanction to this day in very large parts of the country. Dowry, which is formally a gift to a daughter being married, is actually more like a bribe to a groom to take one’s daughter off one’s hands; and grooms of different professions have unspoken but well-established “going rates” for dowry. Obviously, since one would in any case have to pay a dowry to get rid of one’s useless female offspring, the earlier one can get them off one’s hands, the better.

Then is the importance of the virgin status – again unspoken – a woman brings to her wedding bed. Indians aren’t Arabs; we don’t display bloodstained wedding sheets on the morning after as a mark of evidence of the bride’s deflowering. But the virginity of the bride is still as much an issue, which is why rape victims find it difficult to get married. As Vatsayyana said a couple of millennia ago, a virgin bride is important, even if people don’t talk about it openly. The younger the bride the likelier she is to be a virgin, and the younger the age one can marry off one’s daughter, the faster the end of one’s responsibility to keep her virgin.

These, basically, are the reasons why child marriage persists. It’s no accident that those parts of the nation where women enjoy higher social status, like the East and South, also have the lowest rates of child marriage. But child marriage is also illegal…or is it?

The Indian law regarding child marriage is a most curious animal. According to law, the lowest legal age at which a woman can marry is 18; and for a man it’s 21. These are the minimum ages at which a marriage can take place and be registered. But – the law does not make registration of marriages compulsory. A marriage is legal whether it’s registered or not. Therefore, the lowest legal age of marriage hasn’t much meaning. And in at least two recent cases, the courts allowed minors aged about 16 to marry, saying the law shouldn’t come in the way of the union of hearts. Precedents of this nature aren’t exactly good news, because once you begin making exceptions, where do you draw the line?

Then again, while the lowest legal age of marriage is 18 and 21, the age of sexual consent is 16 for both sexes. Intercourse with a girl below 16 is statutory rape (only men can commit rape according to the Indian law) – but another law, dating back to British times and still not repealed, says a man who had intercourse with a girl aged 14 or below will be treated as a rapist unless the woman involved is his wife. Therefore, it’s perfectly legal to have sex with your wife of thirteen, even though she isn’t allowed to have sex before she’s sixteen, and she can’t become your wife before she’s eighteen. You see the maze into which anyone trying to oppose child marriage is heading?

Accordingly, the law’s current attitude to child marriage is equally bizarre. Child marriage isn’t legal; but is it illegal? The law says the government shall try and stop child marriage from taking place; but once it takes place, it can’t be annulled. So all a cop has to do is pretend that he hasn’t seen the child marriage taking place right before his eyes (not a difficult thing to do for a member of one of the most corrupt professions of one of the most corrupt nations on earth) and the parents and organisers are home free. In fact, the few individuals and organisations trying to stop child marriages in the parts of the country where they are endemic have faced a torrid time. Some years ago, a woman social worker who campaigned against the practice was assaulted and had her hands hacked off by goons who wanted to teach her a lesson.

It might be asked, then, why doesn’t the government make child marriage out and out illegal, a crime? I believe that the answer lies in the characteristic pusillanimity of the Indian form of “democratic” government when faced with social or religious orthodoxy. The default state of any political party is to take the safe route, and this generally involves pandering to the extreme social and religious right wing. You can’t expect parties who depend on the fundamentalists for backing to oppose the same fundamentalists on any crucial issue.

The government’s response, to a tide of criticism that it was ignoring child marriage, was this: a few years ago it passed a law which said that if either party of a child marriage wished to opt out of the marriage, he or she could, on attaining majority (which is 18 for both sexes) approach the courts, and then the marriage would be deemed annulled.

This, basically, is a law that fails the laugh test.

Consider the situation of the typical child bride (I won’t, for the purpose of this discussion, consider the groom because he’s always older than the bride, very often being older than the legal age of marriage, and in any case he doesn’t have to abandon his natal home or sacrifice his education or suffer in any significant way). She’s probably totally or near-totally illiterate (remember that bit about her being a burden to the parents and so they don’t waste resources on her?), and therefore more than likely unemployable even as a domestic servant. She has been married off, often while still a baby in arms, to someone whom she has never seen before and naturally has never had an opportunity to refuse the alliance, and has been sent to live with her in-laws and husband while far too young to be able to protest. She belongs – more likely than not – to a social stratum which decrees that a married woman can only leave her husband’s family when she dies. Add to that the fact that her parents will certainly refuse to take her back if she goes back to them after leaving her in laws (oh the disgrace! The social humiliation!). In any case, these women have no rights over their own bodies and usually begin having children as soon as they’re physically capable of it, and by the time she turns eighteen, the typical child bride will have three or four kids in tow.

Illiterate, destitute, unemployable, with nowhere to go and probably with several children to fend for, can one seriously imagine any of these women will even consider, for one moment, approaching the courts for an annulment?

Only if, and when, a large scale change in social attitudes towards women takes place in India is there even a real chance that what I saw in Lucknow so many years ago won’t be repeated.

I’m not really hopeful of seeing that kind of change anytime soon.

http://www.stormloader.com/munaypata/India.htm (A discussion of child marriage in ancient India)