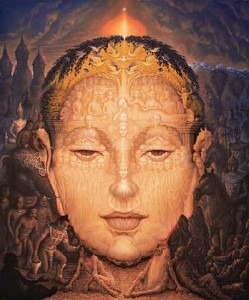 Throughout the past 5,000 years, there have been more than 25 stories and sacred legends of saviours — all born to a virgin mother, all sons of gods, and almost all crucified and resurrected. It’s an allegorical motif that represents the importance of a particular character in a particular culture, or in the world.

And while anthropologists have demonstrated considerable evidence that much of the story we hear at Christmas time is an adaptation of Egyptian, Persian and Mystery School traditions, I cannot help but feel compelled to interject here something of a “so what?”

Yeah, I recognise that the Fundie McNuggets are willing to take up arms and fight tooth and nail to defend the absurd idea that their bible was written by the mythical Abrahamic god, and is not only without error, but also original. But arguing with the ignorant does nothing to advance wisdom.

If you find an idiot running down the wrong road, you don’t need to argue with him or chase him to speed him up… what you need is to get him to stop, so that you can encourage him to turn around and start running in the right direction.

My point, however, is that the meaning of the story isn’t lost just because it’s been repackaged and superimposed over another character’s life.

You see, just as there are ignorant fundamentalists arguing that the bible is their “god’s” word, there are equally ignorant folks who assume that because the authors of the books we now call the “synoptic gospels” plagiarised an ancient sun-god mythos, and used it as a backdrop for their attempt at communicating the message of the Great Teacher, then we should assume the Great Teacher himself didn’t exist.

And that is simply foolish, in my opinion. We have evidence in Tibet, in India and Kashmir that Rav Yeshua ben Yusef — Jesus the Nazarene — visited there and taught the Dharma of Compassion… and these sources are non-Christian sources. So it’s rather ignorant to pretend he didn’t exist, simply because we know the whole virgin birth and resurrection legend were tales told about dozens of people before him.

Our brother, Zen Master and Jesuit, Fr. Robert Kennedy Roshi recently observed brilliantly, “The virgin is a symbol that a woman gets her dignity, not from her husband or her son, but from herself. Her dignity is non-derivative… she earned it freely.” 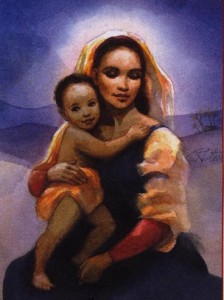 That’s the idea of grace… something that is freely given out of unfathomable compassion. And we are told that Mary was “charitoo” full of grace.

Interestingly, the word for grace in Aramaic actually means “loving-kindness”… one of the qualities we strive to cultivate as students of the Dharma.

I am personally a great fan of Fr. Kennedy Roshi, and of his commitment to continuously foster an environment for interspiritual dialogue. His zendo carries out the principles laid out by the mission statement of his religious order, regarding interreligious dialogue, and builds upon his deep appreciation for the tenets of Buddhism, in a way that demands that if we are to truly experience growth in our own spiritual journeys, we must not only become familiar with the thoughts and traditions of others, but actually become immersed with others in a spiritual exchnge and dialogue of life, action and religious experience.

I cannot help, as I see the work of these visionary trailblazers, such as Thich Nhat Hanh, Robert Kennedy Roshi, Thomas Merton, my Root Guru Tenzin Yangchen Ma, my refuge guru Swami Abishektananda, and so many others, something that Eric Fromm once observed… Fromm wrote:

And that is what this holiday season is all about, folks… it’s about the incarnation of love. As Athanasius put it, “In the celebration of the Incarnation of Jesus, we find God becoming human, so that humanity could become Gods.” Remember, that the earliest followers of Rabbi Jesus understood, perhaps more readily and clearly than any of us, that what their tradition had previously called “God”, and imagined to be a fierce, hostile, bitchy and temperamental tyrant, was actually and fully LOVE. More like a “daddy” than a “vindicator”.

The ancient text doesn’t say “God is like love…” it doesn’t say, “One of God’s qualities or characteristics is love.” It says, “God IS Love.”

Love is not a person… It’s a force, or what the ancients referred to as “spirit” or “ruach” — meaning breath or essence.

In the fifth stanza of Dhammapada, Buddha Sakyamuni refers to love as “the Eternal Law” or “Eternal Principle”. In other words, it is not bound by the limitations of the phenomenal world. It is not only part of the numenal reality, but is the principle behind the numenal reality.

Science has proven that this universe is made up of matter, and we know that if it were possible, to see the space between the tiniest subatomic particles in that matter, there would be a void or emptiness… and so we affirm that the ultimate nature of all phenomena is emptiness, because we’re all made up of the same stuff… and behind that emptiness, the essence or eternal law is Love.

Now back to the Christian tradition, we can apply this idea to what Athanasius said (something, by the way, which Catholics, Episcopalians, Lutherans and some less fundamentalist Anglicans still affirm to this day in their liturgies) — that “God became human, so that humanity could become gods”. If God is Love, then what he meant is that LOVE became incarnate… expressed itself in human form… so that humanity could realise its True Nature.” That is the whole purpose for the story, and the message Rabbi Jesus lived, as an example of a life lived fully realised — fully human, fully love.

Copyright ©2008, His Eminence Dharmacharya Gurudas Sunyatananda (The Most Reverend Dr. F. Francis-Maria G. Salvato, M.Sc., O.C.). All rights reserved. This material may be reproduced, blogged, quoted or distributed, provided the entire copyright including contact information remain intact. It may NOT be altered in any way, without express written permission.

By:Dharmacharya Gurudas Śunyatananda
Throughout the past 5,000 years, there have been more than 25 stories and sacred legends of saviours — all born to a virgin mother, all sons of gods, and almost all crucified and resurrected. It’s an allegorical motif that represents the importance of a particular character in a particular culture, or in the world.

The Naughties – The Decade From Hell