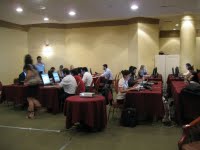 After a sleepless night on an airplane, I arrived in Chile this morning and went straight to my hotel — which happens to be the campaign headquarters for one of the main front-runners in the Chilean presidential elections.  Wow!

But it’s  not that anyone in America even knows that there are elections down here — and not as if anyone cares.  But for the Chileans — who were not allowed to have elections at all for 27 years after the bloody coup of September 11, 1973 — they take their elections very seriously indeed.

Let́s hope that someday Americans will take their elections seriously too.

“Pinera is running as a central candidate,” said one of his campaign managers.  “He stood up to Pinochet.” That́s a definite plus on his side.  “There is probably also going to be one more candidate who will get a majority of votes in this election.  And then there will be a run-off.”  Interesting.  Ím  hoping that Marcos whats-his-name will win.  His father used to be a left-wing guerrilla.  For me, that́s a plus.

Pinera owns Lan airlines and an island and an estancia and a credit card company and is full of big bucks — like so many recent U.S. candidates who have bought their way into office.  But there seems to be a buzz here in Pinerás favor and there are big billboards of him all over Santiago.  Wéll see.

“Pinera wasn’t against Pinochet per se,” said one other source I talked to.  “He was just out of the country during the September 11 coup.̈  Oh.  And one member of the press stated that Pinera would sweep the elections and there wouldńt have to be a run-off.  But another member of the press was rooting for Marcos.  “If Marcos can get to the run-off, he will win because the other center-left coalition will start backing him instead of their own candidates.”

In any case, I’m here at Pinerás campaign headquarters and tonight is the big night!  The press room is filling up.  Let́s wait  and see.

Chilean elections should be very important to Americans;  if for no other reason than that Chile is where we get all our fresh off-season strawberries.  But also because of the strong people-oriented political wind that is now sweeping South America after so many years of rule by dictatorship and torture.  And if Pinera wins, where will he stand?  With the nascent democratic  movement or with the old-guard Latin American friends of the CIA?

For a more in-depth analysis of the election by the Guardian of London, click here:
http://www.guardian.co.uk/world/2009/dec/13/chile-presidential-election 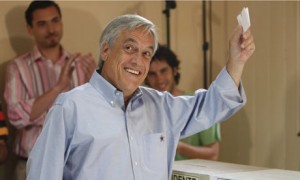 Billionaire tycoon set to win most votes in Chile’s presidential election:  Sebastian Pinera may have to wait for runoff to end 16 years of leftist rule as he requires 50% plus of vote for outright win:   A conservative businessman appeared on course today to win the most votes in Chile’s presidential election, potentially ending nearly two decades of leftist rule which have left the country stable and prosperous.

Sebastian Pinera, a billionaire who owns stakes in an airline and a media firm, said he would rejuvenate the economy but not radically shift Chile to the right.  “Better times are coming to Chile,” he said.  Opinion polls gave him a wide lead over his nearest rival, Eduardo Frei, a former president who is running on the ticket of the ruling coalition, Concertación, which has been in power since the end of Augusto Pinochet’s dictatorship in 1990.

But with four candidates running it was unclear if Pinera, 60, would win enough votes – he needs 50% plus one – to avoid a runoff against Frei next month.  The country of 17 million people was Latin America’s wealthiest but the ruling coalition had run out of steam, Pinera said.  “Chile needs a true renaissance which frees us from this state of lethargy,” he wrote in a Sunday newspaper column.

Opinion polls suggested the tycoon would win 44% of the vote, far ahead of Frei’s 31%, and that he would win a narrower victory in a runoff on 17 January.  If Pinera prevails it would be the right’s first election victory in half a century and distinguish Chile from a continent dominated by leftist governments.  Analysts said he was the right’s most moderate candidate and would keep Chile on a centrist course.  The two-chamber congress is expected to remain divided.

After a four-year term which saw copper and wine exports help weather recession, President Michelle Bachelet has a 77% approval rating.  But she is constitutionally barred from seeking re-election.  Frei, a civil engineer whose 1994-2000 administration was buffeted by economic problems, has put Bachelet’s name and face on his campaign posters but struggled to transfer her popularity.  At 67, he represents the old guard in a country which seems to want change.

The race was shaken up by Marco Enríquez-Ominami, 36, a former film director and congressman who broke from the ruling coalition to run as an independent.  Dubbed “the rebel”, he has promised to increase taxes on the rich and broached taboo subjects such as marijuana consumption, gay marriage and abortion.  Opinion polls put him third with 17%.  If there is a second round, the race will hinge on whether his supporters migrate to a leftist promising more of the same or a conservative promising a shake up.

By: Jane Stillwater
An inside look at Chile’s recently acquired democratic elections, their issues and a pertinent question; should the U.S. take their own elections so lightly?

Think Before You Drink