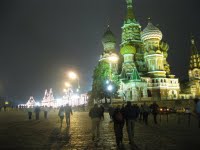 I’m sitting here on a boat that is parked in the Moscow Canal, the massive engineering centerpiece of Josef Stalin’s Soviet regime.  The Moscow Canal is a miracle of construction technique, connects three rivers, connects Moscow to the Volga, has approximately 18 locks, is more complex than even the Suez or Panama canals, was constructed in just four years, was finished in 1937 and was built by gulag slave labor at the price of over a hundred thousand human lives.

Stalin’s top priority in those days was to make the USSR a modern superpower — with him at the helm.  And WAY down on his priority list was honoring the value of individual human life.  40 million Russians died during Stalin’s regime.  According to Alexander Solzhenitsyn, “Working people to death in the gulags saved Stalin the time and trouble of having to execute them.”  The Moscow Canal was built with gulag labor and over 100,000 people died building it with their bare hands, even in the middle of winter.  They died of the cold and from starvation and they lived and worked with scurvy and with teeth falling out of their heads.

You gotta give Stalin snaps for one thing, however.  Apparently his main justification for killing so many people was to create a bigger and stronger Soviet Union — whereas America’s dear leaders for the past 30 years only seem to be killing people in order to aggrandize their personal bank accounts and for personal power.  (Yes, I just read a review of Michael Moore’s new movie on capitalism yesterday, at a tiny overcrowded internet cafe/video arcade next to Stalin’s North River Terminal and, yes, I am currently reading Barbara Ehrenreich’s book, “This Land is Their Land,” all about how Americans are being skillfully screwed royally by our very own uber-rich.)  But I digress. 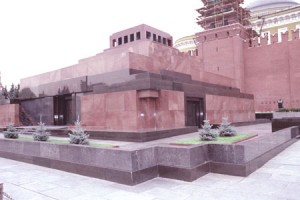 Yesterday I had the pleasure of meeting three Russian veterans from World War II — and to listen to some of their gruesome tales from those times.  These people had experienced the horrors of war up close and personal.  I don’t think that Americans really know what the horrors of war are actually like because we haven’t really experienced war on our soil since back when Grant marched from Atlanta to the sea.  But these people had.

The first vet, an eighty-five-year-old man with a chest full of metals, made a statement that perhaps a lot of American vets might not agree with — but here it is FYI:  “About sixty countries participated in World War II but the Soviet Union was the bloodiest front.  27 million Soviet citizens died.  As even George Marshal said, ‘The Allies on their own would not have been able to resist Hitler.’  Hitler really had planned to conquer the entire world, taking Africa and South America after he finished taking Russia.  But Hitler’s plan didn’t work out because of Marshal Zhukov and the Soviet people.”

Could America really have defeated Hitler without the aid of Stalin?  I would have to do some heavy-duty research before I could answer that question — and I hate research.  Plus accessing an internet cafe in Moscow is a pain in the booty because everyone here seems to have their own home computers.

“There have been many books written about World War II that talk about what had been done wrong back then,” continued the first vet, “but they hadn’t seen it with their own eyes.  We have.  We started off to war at age 16 or 17.  Can you imagine what it was like for a boy that age?  Imagine your first day in the trenches, facing 40 or 50 tanks.  I was scared.  But the older men I was with were calm.”  Facing 50 tanks a day regularly has a calming effect?  I guess.

“War is constant noise.  It’s hard to imagine.  There’s a tank coming at you and all you have is a Molotov cocktail.  Can you defeat the tank?  You have to.  The tank is coming right at you.  You go down into a trench and the tank rolls over you.  I want to tell you what it was like for a young boy in the worst war of the century.  We boys were like suicide bombers — armed only with small grenades.”

Then the first vet stated that, during Hitler’s holocaust, three million of the six million Jews that Hitler killed were Russian Jews.  “After the war, I helped to liberate Sachsenhausen concentration camp.  We opened the gate using a tank and we entered.  It was horrible.  There were only women.  The men had been moved — the Nazis had taken them to be drowned in the Baltic Sea.  The women could not even remind you of human beings.  They were like skeletons.  Our commanders told us not to touch them because the Nazis might have given them diseases to spread to our army but how could you not hug them?  500 of them lived in places with 100 beds.  They slept in shifts.  The places where their bodies were burned were horrendous.  What would you feel if your own house had been burned, your children were killed and your mother was starving like that?  We were so angry.  We wanted to kill every Nazi we saw.”

The next Russian vet had been a fighter pilot during World War II.  “Nazis had much air combat experience after Poland.  They simultaneously attacked 66 Soviet airfields, and 800 of our airplanes were destroyed before we could leave the ground.  Nevertheless, Soviet pilots fought back with E-16s, E-15s, MIG-1s and MIG-3s.  In one week we crashed and defeated over 850 Nazi airplanes.  We were mostly flying older models but the Nazis were never able to do that much damage again.”  This vet too was covered with metals, stood ramrod straight and looked like a much younger man — but he had to have been at least 90. 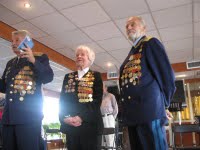 “They planned to take Moscow and western Russia within a few months,” the pilot continued.  “And it was only near Moscow that we were able to stop their planes from both the air and the ground.  We had a plane called a Flying Tank there.  This was the first battle where the Nazis were defeated, and then the counterattack started — in the snow.  At first we counterattacked without airplanes, but our industry was running well and we soon produced over 2,500 planes.  The Nazis were never able to retain supremacy of the skies again.”

One of several American vets present at this event then asked the Russian pilot, “How did ordinary Russians feel, after the war, about suddenly becoming enemies of the Americans?”

“We were not allowed to leave the Russian section of Berlin after 1961, when the Wall went up.  Before that, the two armies had been friendly.  But after that we just did what the politicians told us to do.  The ordinary soldiers on both sides were fed propaganda.  So we must now leave it to history to find out what really was true.”

As for the role of “political officers” during the war?  “It was so strategically important not to lose Stalingrad that the political officers stood behind you with guns, so there was no stepping back.  No retreat was possible.”

According to the pilot, “During the war, Russia got excellent technical support from the U.S.  Flying an American-made Cobra, one Russian pilot shot down 49 German planes.  What we really loved, however, was the American canned food.  We would open a can and say that we were opening a second front.”

The third vet to talk was a woman.  “I was 16 when I went to the front.  Over 18,000 women went to the front.  There were bombs falling.  Noise everywhere.  Tanks, artillery, airplanes, even the water began to burn.  It was scary.  I sat down and cried.  Soldiers everywhere were calling, ‘Sister, mother, help me!’  It is painful to remember.”

And the vet was also taken prisoner.  “Our Nazi guards were as mean as their dogs.  For one and a half months we carried sand to construction sites for them.  Our hands were bleeding.  Every day was the same.  Then we were taken to the trains and sent to Germany.”

Some of the male prisoners removed the boxcar’s boards and people jumped down onto the tracks from the floor of the moving train.  “I jumped down too and survived.  I went back through occupied territories, walking and crawling.  Then I rejoined the Front.  When we rolled into Berlin and got to the Reichstag, I carved into a rock, ‘I will remember’.  And I have.  Everyone in my family went to the Front.”

Later on, I asked a Russian friend of mine what she thought about the Soviet invasion of Afghanistan.  “The USSR invaded Afghanistan,” she replied, “and that was the most useless war we ever participated in.  15,000 young Russian men have been left there forever.  My best advice to the Americans is to leave the place.  At first Americans supported the Taliban and now they are fighting the Taliban.  My advice is to get out now.”

On the streets of Moscow even now you can still see small bunches of lost and desperate men, around the age of 35, hovering in corners, looking homeless — and looking very much like our American Vietnam vets still look as they too hover on street corners, in America, many years after our own defeat in Vietnam.  I will bet you anything that those desperate-looking men that I saw in Moscow are Russia’s Afghanistan vets.

World War II veterans share their memories with Jane Stillwater in this very special interview on the streets of Moscow.