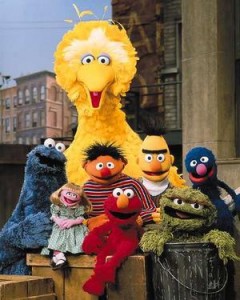 As I contemplate on the 40th anniversary of Sesame Street, I can do nothing but shake my head at the simple fact that this show is only 110 days younger than me. A fact in retrospect, I find comically…; well annoying.

I’m not really perplexed as to the concept of the anniversary per say, but the significance of the intervening decades is quite a ride. We’ve come a long way, boundaries have been pushed and not only have the fun, but the facts of life have been dealt with in a manner of education and empathy.

Now a bit off point, for a moment that is; I would also point out that Sesame Street wasn’t the only show to deal with these issues. I remember when Mr. Rodgers started his show once with the title song and at the end when he went to feed the fish he found one had died. It was, profound, amazing when this former pre-school teacher winged an entire show and talked about death and how it was ok to talk about it.

That was perhaps, in the first time in the modern era that death was openly talked about in an educational way to explain and soothe young, delicate minds. It however would not be the last. I remember when Big Bird talked about the death of Mr. Hooper.

I was very young, and there was visibly something very wrong with the show. An adult would have understood the situation and the incident without question. It wasn’t as if the cast hadn’t talked openly on the show about Mr. Hooper’s terminal illness. But still my young brain didn’t understand the concept of death or the finality of it. Thank you Big Bird for telling me the truth in a way that I could understand and accept, and why it was that Mr. Hooper wasn’t coming back. I then understood where my Grandpa went.

Over time new puppets were introduced, and most came to the table with important ways to explain, sometimes very serious, issues of the day. Take for instance Kami, the HIV positive monster. And some have been very annoying; doo doo da doo, doo doo da dada do, Elmo’s World. But still all have been pioneers in their puppet right.

There are so many characters but I remember the original the best. Ala peanut butter sandwiches, “C” is for cookies, vague; but recognizable references to animosity poorly referenced because most can recall the speakers name. Sometimes at a friend’s house, when their phone rings, I get looks questioning my sanity when I begin to count; one ringy dingy, two, two ringy dingy. I can’t help myself, and secretly wish it would thunder and lightning whilst I reveled in the confirming number in Transylvanian hysteria.

There is so much more. I learned how to be self confident and believe in myself, Big Bird taught me that. Mr. Snuffleupagus was more than Bird’s imaginary friend, everybody wouldn’t accept Snuffy’s existence. We all saw that Bird wasn’t going mental, but was rather a victim of perpetual bad timing.

This happened for years and finally in Hawaii, while searching for Mount Snuffleupagus, was Snuffy finally seen by all. And mind you they were all chasing Bird to convince him that Snuffleupagus didn’t exist. I learned what redemption was, how sticking to ones beliefs, no matter what other people say; how your knowledge of what of what you know to be true should not be taken away from you. In later years it was the dismay of others when I stood my ground. Thanks again Bird.

Who hasn’t taken the Birdkateer oath? I know that I am a grouchkateer as well. I know Super Grover’s secret identity; I’ll tell you if you don’t know, just don’t tell anyone else, it’s a secret after all. Up until now I have been modest, but surely you recognize my singing talents; I sang duet with Prairie Dawn at each and every opening of This little Theatre. I even speak Narf

I learned about disability, Linda taught me the world of a deaf individual. I learned a lot about sign language from her. Children in a wheel chair, others with Muscular Dystrophy, even young cancer survivors. I learned how others with conditions I sometimes didn’t understand, should be treated with dignity, but more importantly with equality. There were no boundaries, we learned to love each other through truth and understanding.

The Honkers, Pigs in Space, Gladys the cow, Muppet Polly Darton, Biff and Sully, the Typewriter Guy others ab infinium. Friends each and all.

Maria married Louise, had their child Gabby. Susan Bob, Alan and Miles. I remember them all. A new generation also has a first love in Gina.

I can go on and on, but do you know what I think is needed to finish this? No? I think I need to hear what you say as well. If you’re shy we can play this game I know. It’s called ‘One of these things is not like the others”, it’s a great way to get to know each other.

By Krans Sanis Seriously, though… As I contemplate on the 40th anniversary of Sesame Street, I can do nothing but shake my head at the simple fact that this show is only 110 days younger than me. A fact in retrospect, I find comically…; well annoying. I’m not really perplexed as to the concept of…

Words at Play-A look inside the Nimrod Writer’s Confrence