What is Past is Prologue 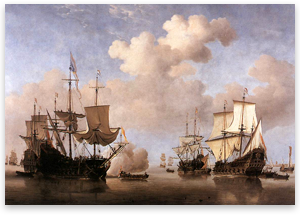 Recently, an article reminded me of a book I’d read almost twenty years ago – in it, historian David Fischer pointed out that there were four distinct migrations to the shores of America, and that each one laid the groundwork for the social structure which led to the Civil War and the cultural divide we have between the northern and southern states today.

Revisiting that book was an interesting experience this week, as I was compelled to view the material in a new light – a far darker and less-romantic vision of America, as the fundamentals of our makeup have led us to this pass – the reaction to 9/11; the ascendancy of the Right, and especially the all too real possibility of another civil conflict.

Fischer identifies these waves of migration as follows:

While these weren’t the only migrants – there were French Canadians and French who settled Louisiana, for example – these were minor migrations which did not materially affect the fabric of American society, save for their local influence. It was the four major migratory ‘waves’ which literally created America.

In the 1770’s-’80’s, the Revolution was fought primarily due to a union between the Puritans of New England and surrounding northeastern states and their Cavalier counterparts in Virginia. The American Civil War of the 1860’s was more of a continuation of that conflict than a ‘new’ war – the Puritans, wanting an end to slavery, could not force the hand of the Cavalier culture in the South at the time the Constitution was written. This happened when the two cultures turned on each other in the 1860’s, settling with a Constitutional amendment the issue of human slavery, and settling (for the time being) the ideas of states rights and secession – more on that later.

Approaching the whole as a socio-anthropological study gives us the ability to detach much of the emotion from the thing, and look at our past from a very human standpoint, devoid of the twin concepts of politics and religion. It’s the aftermath of the Civil War period which gives credence to the concept, and gives us pause as we ponder our future as a nation – it also gives us the framework by which to answer a perplexing question – why is nearly half of the nation – made up almost exclusively of working-class people who are (or should be) at fundamental odds with the core tenets of, yet are supportive of, the political party of the ‘ruling class’.

The startling thing about this map is that it almost exactly reflects the Borderer migrations pre and post Civil War. While the Republican party has maintained some of the classic Cavalier philosophies of money and privilege, paradoxically the Republicans have also, in order to gain a broader base, adopted a Borderer culture with Borderer values.

Who are the Borderers?

The Borderers are those peoples who resided on or near the borders between Scotland and England. In a state of near-constant conflict since the 1100’s, the border regions were finally ‘pacified’ (read: Militarily defeated) in the 1700’s. Many of them – in fact, entire regions along the borders were stripped of indigenous populations, these people suffering wholesale-deportation to America.

Capitalists from England came to the border regions to create estates from the newly-vacated land. Not content with what they had, mass evictions of Scots and border-English families became common – the evicted took ship for America in droves.

These people were not like the Puritans, who aspired to education and who had loftier reasons for leaving England – religious and political freedom; the ability to speak one’s mind without sufferance. The Borderers came to America with one goal in mind – material improvement in their lives.

The lands to which they were relegated were in the backcountry of America at the time – the southern regions of the colonies and westward to what is now Kentucky and Tennessee. These areas were already populated by First Nations peoples, and the Borderers wasted no time inflicting on them the same treatment they had suffered themselves.

Borderer politics were rough-and-tumble; Andrew Jackson is probably the best example of this, along with John C. Calhoun. Their religion was also far less structured, taking the form of field meetings and prayer-groups, with semiliterate preachers giving broad-ranging interpretations of the Bible and its meaning. Living a hardscrabble life, these people were easy converts to the teachings of people like John Darby and the Dispensationalists; pre-millenial ‘rapture’ was prominent in their church culture, and the desire to hasten Christ’s return (when, ostensibly, life would be better) was also a prominent feature.

Coming from a culture of definite superiors and inferiors based on material possessions (mainly land and cattle), which gave rise to an order based on social rank, the Borderers who came to America mimicked this structure in their New World lives. Conservative to an extreme, they routinely ostracized people who didn’t conform to the ‘rules’. Whereas they had well-defined notions of ‘freedom’, the freedom to dissent wasn’t one of them.

Indeed, violence in Borderer culture was ingrained for a thousand years before any of them came to America. The concepts of shooting trespassers; the beginnings of America’s ‘gun culture’; favoring property over civil or human rights – all are hallmarks of Borderer culture.

Fighting ability was valued highly – to the extent that favoring anything military (if you’ll pardon the almost-pun here) bordered on worship.

On the other hand, there were things which were not valued in Borderer culture – top of that list is education. In England, education was only reserved for the most-promising or the most-wealthy; while schools were built in backcountry America, most adhered to the ‘blab-school’ concept, offering very little in the way of genuine education, save the little a child could learn by rote or repetition.

Again paradoxically, early American backcountry sexuality was dominated by the twin concepts of promiscuity and Calvinism – the ‘shotgun wedding’ literally got its start in America’s backcountry. Girls became pregnant as teenagers; illegitimacy was rampant, and due to the low population both in English-Scottish Borderer country and America’s backcountry-South, the population didn’t draw such a fine-line regarding sexual congress between close relatives.

Always an insular culture brought on by the differences they brought and the remoteness of their location, Borderers were always quick to join-ranks against any outsiders – or outside ideas. Their own peculiar brand of conservative activism prevented the dissolution of slavery during the Constitutional convention, and led to the Civil War in the 1860’s. American Backcountry xenophobia, wrapped up in a culture which predates the founding of the nation, exists to this day.

So, what of today?

Some of the dots are easy to connect – the Republican Party is the party of the conservative South and America’s backcountry; it espouses much of what Borderer culture has become, and while it represents a fixed-point cultural anachronism in American society, it also has the benefit of great financial support from America’s ruling class, and a ready-and-willing set of culturally-ingrained servants – a form of political servitude not much distanced from its 16th and 17th-century roots in the border-ridings of England and Scotland.

In fact, much of traditional Borderer values are present in recent headlines and conservative gatherings. A quick look:

— Fear of religious persecution
— Promotion of a ‘thugocracy’ – beating-down the ‘liberals’
— Shooting abortion providers
— Actively calling for a ‘Christian revolution’
— Conservative activism, carried to extremes (assault-rifles at speeches; etc.)
— Defense of ‘traditional marriage’ at the expense of the civil-rights of others
— “Taking their country back” (through force of arms and a gun-culture, if necessary)

This ‘culture-within-a-culture’, while not unnoticed, has caused many a journalist, politician, and other pundit no small amount of alarm and confusion. Until we examine its sociopolitical and anthropological roots, however, we can’t begin to understand its meaning.

The polarizing effect of this culture is evident both religiously and politically. With pastors calling for ‘a new Christian revolutionary war’, and with Congressmen like Joe Wilson shouting ‘You lie!’ from the floor of the House, it’s not hard to see that there are highly-charged emotions running rampant over common sense.

Borderer culture gave rise to John C. Calhoun, the firebrand of the senate during the years prior to the Civil War; it was Calhoun who advocated (as early as 1832) outright secession from the United States, and who later stated that slavery was a ‘positive good’ in America.

We cannot forget another Borderer, Preston Brooks (who, like Calhoun, was also from South Carolina); Brooks beat fellow senator Charles Sumner almost to death with his cane, having disagreed with Sumner’s speech vilifying then-recent pro-slavery violence in Kansas.

It appears that Calhoun-style politics has raised its head again in America, thanks to the persistent Borderer culture.

We only have to look at the rhetoric of Michele Bachmann, who has called for a ‘revolution in America’ so that Liberals ‘can’t achieve their ends.’, or the recent calls from Governor Rick Perry of Texas for outright secession.

Ignoring the media at this juncture is a mistake. We only have to look at the likes of Rush Limbaugh, Sean Hannity, and Bill O’Reilly to see the true nature of Borderer-culture-made-manifest in modern American politics.

Economic marginalization has always been part and parcel with Borderer culture. It shouldn’t be a surprise to see right-wing extremism – seated in ‘red’ states with heavy Borderer ancestries – on the increase.

The ranks of disaffected Americans are growing. The recession has disrupted the plans of 1 in 3 Americans – a level not seen since the Great Depression. Extreme philosophies; honed for decades by ‘red’ state residents, have greater appeal with the advent of a bad economy.

If I’m right, we have the rest of this year and the next to straighten things out. If we don’t, our own history and cultural differences suggest serious civil conflict – this time, as before, a cultural divide, but the stakes are actually far higher: We’ll be deciding whether we remain a republic which values property over people, or whether we become a true social democracy.

The choice, I fear, will be made by those with the loudest voices.

by Astra Navigo
Recently, an article reminded me of a book I’d read almost twenty years ago – I (am) compelled to view the (Historical) material in a new light- the reaction to 9/11; the ascendancy of the Right, and especially the all too real possibility of another civil conflict.

Religion and Spirituality – An Atheist’s Perspective