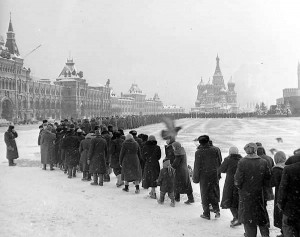 After watching a video about Vladimir Lenin’s takeover of Russia in 1917, I just had to go see this famous tomb for myself.  “Lenin promised the workers that he would create a democratic government by the people,” the video’s narrator stated, “but Lenin lied.”  Lenin lied through his teeth to all of those sweet, gullible Russian peasants back in 1917 — just like the powers-that-be in Washington have been lying through their teeth to all of us sweet, gullible Americans during the last 40-odd years; lying about everything all the way from Johnson and Nixon’s Vietnam, Reagan’s economic deregulation program, Iran-Contra affair and “war” on Grenada, Clinton’s Kosovo and NAFTA, Bush’s Afghanistan folly and war on Iraq and the infamous Bush-Obama joint Wall Street bailout — up to and including the healthcare insurance company scams that are now being taunted by Congress and which currently kill 225 Americans a day.  But I digress.

In 1917, Lenin’s true secret mission was to establish a dictatorship in Russia — with himself at the helm.  And most of the people in the newly-formed USSR fell for his passionately-delivered “State of the Union” speech, thus allowing Lenin to write his own Patriot Act and to rule Russia with iron-handed signing statements until his death in 1924, after which time Stalin preserved Lenin’s body and promoted him to proletariat sainthood.  And millions of Soviet citizens began trooping through Red Square to see his body, which became a legendary pilgrimage spot for good Comrades.  So.  This here tomb of Lenin’s is powerful historical stuff — and definitely a Must-See for us tourists.

But how can I get all the way to Red Square from where I’m staying now, out at the North River Terminal, out in the middle of nowhere?  “Just take the subway,” someone said.  Who me?

Moscow’s subway system is enormous, the trains run really fast and all the station names are in Russian.  You gotta be kidding.  But then I asked a Russian friend of mine to write down the names of the stations I needed to get on and off at, and then just kept asking every Russian I saw how to get there.  “You just count down nine stops from where you are now.  And then look for the McDonalds.”  I can do that.

So I arrived early in Red Square on Monday morning and started to stand in line for Lenin’s tomb.  “Never go to a foreign country without gel,” my daughter Ashley always warns me.  Or without a book to read while you stand in line either.  So I read “The Twilight Years: Paris in the 1930s,” shivered in the morning cold and chatted with the man standing behind me — who looked Korean-American.  “You from San Francisco?” I asked. 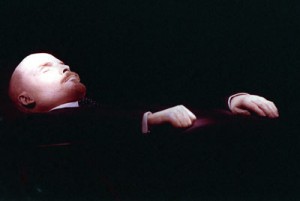 “Oh.  Then this weather must not be cold for you.”

“That’s a stereotype.  Siberia is actually quite warm.”  Yeah right.  “No, really.  It’s actually rather sunny.”  Then the line started moving and we were actually entering Lenin’s tomb.  And it was SPOOKY.  Its dark and mysterious atmosphere was like one of those weird haunted houses that you go to on Halloween.

First you go down a series of black marble steps, poorly lit, dangerous.  And at each turn in the series of steps, silent Red Army guards stand rigidly at attention.  And then you round the last corner and there is the dark, silent, spooky bunker-like tomb.  And there is the actual body of Lenin himself — the man who was ultimately responsible for the deaths of over 40 million Russians — lying in his casket, looking ghostly, with only his face and hands exposed and lit, and looking, er, short.  The only thing missing to make this scene complete is some piped-in organ music by Bach.

Lenin himself looked like he was made out of wax.

I then out-and-out stared at the moribund body Comrade Lenin for as long as I could — until a silent guard finally motioned me to move on.

Now I know where Count Dracula hangs out in the daytime.

Russians are all talking about closing down Lenin’s tomb now.  No, don’t do it!  Even for all of its Halloween atmosphere and general over-all spookiness, this place is a very important part of Russian history.  Almost every schoolchild in the former Soviet Union has been here.  This tomb has become legendary over the last seventy years.  And not only that, but this place is a SERIOUS tourist attraction.  And it is also a warning to coming generations of Russians — and also to coming generations of Americans as well — that what you see is not always what you get.  And that our leaders find it too temptingly easy to lie to us.  I also think that when all of our current and past American political leaders — the ones who have happily sold out our country to the rich and powerful at the expense of the rest of us — finally die off, we should make a Halloween wax-museum monument for them too.

A little side note:  They say that Russians never smile.  “That’s not true,” said one Russian I met in Moscow.  “We smile all the time — when we have a reason.  If we know you well, then we smile at you frequently.  We just don’t smile arbitrarily at strangers, that’s all.”

Russians who work with Americans have to be TAUGHT to smile all the time.  According to Barbara Ehrenreich, there’s a reason that Americans smile all the time.  “Smiles, at least in human society, are gestures of submission and are routinely demanded of [women, employees, service providers, congressional representatives, etc.] as a token of subordinate status.  The happy slave smiles; the well-trained lady smiles; now even the male white-collar striver has to keep his lips pulled back in an expression of eager compliance.  Only the top guys get to snarl and snap their way through the day.”

Has America become a country of Stepin Fetchits?  Duh, yeah.  Why in the freak do you think they keep feeding us anti-depressants?  So that we can fake our subservient smiles better, of course.

How can you go to Moscow and not visit Lenin’s tomb! You just can’t. Be sure to stay tuned to the rest of Jane Stillwater’s visit to Russia.

The Clunker Evolution of American Steel