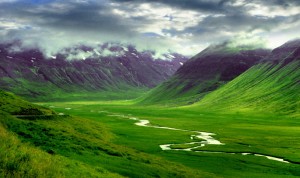 There is a land as beautiful as my land, as challenging and harsh in its climate, as diverse and demographically populated as my people.  They speak a different language, but they have the same pride in their culture.  These people are the Icelanders.  My first real introduction was receiving a video on Iceland from a Norwegian friend.  I didn’t understand the words, but I understood the music and the swelling of emotion as the tape showed the waterfalls, the volcanoes and the deep blue waters of Iceland.

Iceland again caught my attention when it became a leader in clean energy.  Tapping into all their natural resources; waterfalls, geysers, volcanoes and hot springs, they supply virtually all their energy for electricity and heating.  Iceland ranks 53rd in the world in greenhouse gas emissions per capita, according to the Carbon Dioxide Information Analysis Center — the primary climate-change data and information analysis center of the U.S. Department of Energy.

They are still oil dependent for vehicle transportation, but again leading by example, they have been developing advanced fuel cell technology.  Fuel cells use hydrogen, which is produced through water and electricity; and Iceland has plenty of both.  “The fuel cell car is just like a normal car,” said Asdis Kritinsdottir, project manager for Reykjavik Energy. “Except the only pollution coming out of the exhaust pipe is water vapor. It can go about 100 miles on a full tank. When it runs out of fuel the electric battery kicks in, giving the driver another 18 miles — hopefully enough time to get to a refueling station. Filling the tank is similar to today’s cars — attach a hose to the car’s fueling port, hit “start” on the pump and stand back. The process takes about five to six minutes.” 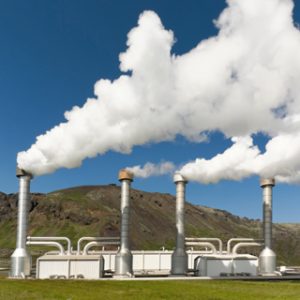 Iceland has been a leader in medical research on spinal cord injuries.  In 2001, the conference, “New and Emerging Approaches to SCI,” was sponsored by the World Health Organization (WHO) and Iceland health officials.  About 30 scientists attended the conference, including representatives from Brazil, China, England, France, Iceland, Israel, Mexico, Russia, Sweden, and the United States.  They covered every aspect of spinal cord treatment from stem cell research to functional electrical stimulation and bio-mechanics.

Based on his Red Cross experience treating the Afghan war wounded in Pakistan and the Romanian poor, Anba Soopramanien discussed SCI rehabilitation in the developing world. Most of the world’s SCI patients do not have access to the sophisticated, costly, rehabilitative technology that those in developed nations take for granted. For example, Somalia’s $11 per capita health-care expenditure (compared to about $1,800 in Iceland and $4,700 in the U.S.) can do little to promote SCI rehabilitation. Given such economics, Soopramanien felt, among other things, that Western-trained SCI professionals should supplement their expertise with the wisdom offered by more affordable and accessible traditional or indigenous medicine. Overall, said Soopramanien,  there is little appreciation of the concept of integrated SCI health care in developing countries. To truly alleviate the world’s SCI-related suffering and mortality, we must work with the third world as a partner to develop new SCI-care approaches, strategies, and paradigms suitable to unique cultural conditions. 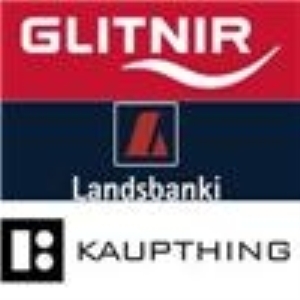 The Ice Save Melt Down

Iceland was a poster child country; progressive, diplomatic, even receiving recommendations from Russia for its hospitality.  It was affluent.  It’s three leading banks, Kaupthing, Glitnir and Landsbanki invested its capital in the flourishing stock market, as did so many other countries.  It affiliated itself with the United Kingdom Bank, which generously lent them large sums of money.  Its portfolio looked good; a small but sovereign country with no outstanding debts and invested in capital enterprise.  In September of 2008, this all changed.  While the financial institutions of the United States began filing bankruptcy and scrambling for a shelter, the banks of Iceland were hit with their own collapse.

According to economics professor, Willem Buiter, “During the final death throes of Iceland as an international banking nation, a number of policy mistakes were made by the Icelandic authorities, especially by the governor of the Central Bank of Iceland, David Oddsson. The decision of the government to take a 75 percent equity stake in Glitnir on September 29 risked turning a bank debt crisis into a sovereign debt crisis. Fortunately, Glitnir went into receivership before its shareholders had time to approve the government takeover. Then, on October 7, the Central Bank of Iceland announced a currency peg for the króna without having the reserves to support. It was one of the shortest-lived currency pegs in history. At the time of writing (28 October 2008) there is no functioning foreign exchange market for the Icelandic króna.”

Iceland had just suffered the same demise as the American banking institutions, but without the advantage of printing out a few trillion dollar bills to keep the economy buoyed.  Iceland was left with a debt that rested solely on the backs of its people., and without one lender to support them.   No Euro dollars.  No American dollars.  No back up of any kind except their own resources.

On the day after Glitnir’s nationalization, on the 30th September, GBP (British Pound Sterling) 37 million was taken out of Kaupthing Edge bank accounts in the UK. This massive withdrawal triggered a ‘code red’ on the state of Singer & Friedlander. In response, Singer & Friedlander announced it would increase its funding from Kaupthing by an additional GBP 1.1 billion; but the mother company could not provide such funding.  The remaining assets were frozen and Kaupthing collapsed.
Aftermath of the Storm 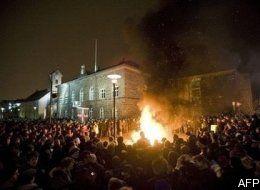 The anger of the Icelandic people is understandable.  The Holland and London based financial institutions insist that the citizens of Iceland are responsible for the banks they had invested in, and they want their money back now.  They are willing to pay back the debt.  The yoke is a yearly interest charge on the 3 billion GBP (ten billion dollars) that laps up the entire tax base of the 300,000 citizens.  Many feel fraud was involved and Kaupthing recently took the English banks to the high courts to prove it.

Although the general consensus has been, if England had not withdrawn such massive amounts from the Icelandic firm, Kaupthing would not have collapsed, the High Court of London decided the London banks were not at fault.  Iceland had nationalized one of its banks, leaving the other two questionable as to their ability to remain within the International arena.  Almost as though it was deliberate, almost as though to verify the words, “no good deed goes unpunished”, Iceland was dethroned from a leading voice in global progressive unity to a humiliated country in one sure stroke of the economic sword.

Since Iceland’s spiral into economic ruin, the mood of the people is dismal.  The unemployment rate of 8,2% hasn’t been higher since 1997.  The construction of a half finished concert hall overlooking Flaxifloi Bay, which was to be a symbol of their prosperity, has halted, with estimates that its completion will not take place until 2011.  Businesses, restricted by their local currency, are floundering.  Loan payments have doubled.  Crime has skyrocketed.  Bitter tensions have erupted between Iceland and Great Britain.  The Icelandic people blame everyone from Britain and its Prime Minister Gordon Brown, to the EU to the big Icelandic investors – sarcastically referred to as the “Vikings” – whose antics abroad are considered to be a big catalyst in Iceland’s downfall. Many of these so-called Vikings have felt the full force of that wrath. Their cars and houses have been vandalized – a level of violence unheard of in Iceland for many decades.

Getting the Best for Cheap

As Iceland struggles to recover, it turns to tourism and small business endeavors that include private services such as dining and handcrafts.  The International exchange remains difficult with its weak currency.  October 26th. McDonald’s pulled down their golden arches.  Citing rules that entailed buying their beef and other ingredients with Iceland’s weak currency, the global franchise claimed doing business with Iceland is just too expensive.

According to Thomas Friedman, correspondent for the Nordic Financial Times, there are pro’s and con’s involved with McDonald’s decision.

The pros: as per Thomas Friedman: “No two countries that both had McDonald’s had fought a war against each other since each got its McDonald’s.”

The cons: variously, McDonald’s is a symbol of American cultural imperialism, capitalism, environmental meat-eatist degradation. And, of course, its departure could now mean that Iceland, now off the special sauce, is also off the world’s economic grid.

It seems wrong, somehow, that a country that had given the world the best of its medical expertise and had pioneered into renewable energy resources should now be ignored by the very countries that had benefitted from it.  It seems even more disproportionately wrong when you consider that these contributions to global knowledge came from a country of 300,000 people; a population no larger than that of any medium sized  town within the developed countries.  The efforts of Kaupthing to file against the giants of finance, Great Britain and Holland, were like the voice of a single individual filing against a major insurance company.  It needed other countries that had experienced similar plights, to back it.  It needed to file a class action suit.

Iceland is angry; so angry, the citizens boldly suggest their country join Russia or Canada; even though they have been a sovereign country since 1947,  while the government works frantically for admission into NATO.  The application into NATO is based off necessity, not the good will of the people.  The people feel the banks of London and Holland failed them.  They feel Europe failed them.    They feel NATO will let them down.  The truth is, we have all been let down when the global economy is being played by a handful of bankers with the win-lose mentality of a monopoly game with a twist; they manufacture their own money.  The truth is that a country with an abundance of resources, both in natural materials and intellectual property, should not have been brought to its knees.  The truth is that the lessons learned from Iceland should not have been how small countries should never try to compete against veteran Capitalists, but how small countries can thrive on their own ingenuity.    They should have been a hope, an inspiration for a brighter tomorrow.  Instead, they have been one of the worst examples of economic failure in a world crisis.  They have been a lesson in how to get the best for cheap and then exploit it.

By Karla Fetrow Pride and Progress There is a land as beautiful as my land, as challenging and harsh in its climate, as diverse and demographically populated as my people.  They speak a different language, but they have the same pride in their culture.  These people are the Icelanders.  My first real introduction was receiving…