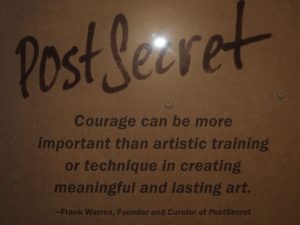 Many of  you may be familiar with PostSecret, a project started by Frank Warren as an artistic experiment in what people will tell if given the chance to be completely honest anonymously.  It has been incredibly successful for all parties.  Frank Warren will tell you he is humbled by people’s secrets.  Those reading are empowered and encouraged and those submitting secrets are unburdened in a way that helps them heal and protects those they love.

It all began with a blank post-card handout in one neighborhood.  People were asked to write a secret on the card and send it in.  Frank Warren never expected it to become as big as it has, but apparently a lot of us are walking around with secrets we need to tell.  Some of them are heartrending, some uplifting, some just plain bizarre.  But all of them belong to somebody and for some Frank has become their confessor, indeed one could say we all have.

Three books have been published and are used in a variety of ways from Therapeutic Practitioners to Artists and even Clergy.  His newest book which is set to be released on Oct 6, 2009 deals with the spiritual collections of PostSecrets and is entitled PostSecret book,” Confessions on Life, Death, & God”.

Frank also operates a blog and continually accepts your PostSecrets.  New Posts are updated every Sunday and the community provides for discussion and on-line submission in the form or e-cards, art, video and the written word.

Here’s a press release of the upcoming book.

By: Grainne Rhuad
Frank Warren’s newest book which is set to be released on Oct 6, 2009 deals with the spiritual collections of PostSecrets and is entitled PostSecret book,” Confessions on Life, Death, & God”.