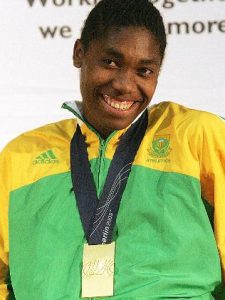 On August 19th,  South African athlete Caster Semenya won gold in the women’s 800 meter race at the World Track and Field Championships in her first run in adult competition. After her win, she was asked by the International Association of Athletics Federations to undergo gender testing. The reasons cited were that the time of one minute fifty five point four five seconds was a considerable improvement on her previous race times as well as being the fastest time in the 800 meter run this year, her strong build and deep voice. Within a couple of weeks it was leaked to the Australian press that Semenya was a hermaphrodite with both male and female genitalia, though with no womb or ovaries; and produced three times the amount of testosterone than normal,  though the IAAF has stated that results will not be known until November. If the leak proves true, Semenya will no longer be allowed to compete in women’s events; but since she is not accused of hiding her gender, she may be allowed to keep her gold medal. Semenya’s mother has been quoted as saying, “She was born a girl and raised a girl” in the maelstrom of controversy that the leak created.

Is Castor Semenya a man or a woman? The answer is yes and no. Intersexed people, or hermaphrodites, are produced when the sexual organs that usually choose to be a penis or clitoris, testes or ovaries, and scrotum or vagina instead opt to split the difference. The amalgamated gland, the ovotestes produce both testosterone and oestrogen so that the intersexed person has oestrogen and testosterone levels higher than the individual sex’s ‘normal’ levels. The Y chromosome, or the male component that determines the sex of a person, is ‘weaker’ than the female X chromosome counterpart which then shapes the intersexed person to display the more feminine secondary sexual characteristics such as lack of facial hair and breasts. While intersexed people take on the appearance of being female they are unable to engage in the reproductive process because of the lack of fully developed soft tissue that would create a uterus. True intersexed people do not menstruate nor do they produce spermatozoa.

The main concern of the IAAF would be the production testosterone. Testosterone has been assigned as the primary hormone for the building of muscle mass and strength and therefore the logic would follow that the more production of the hormone, the higher the performance expectations of that athlete. The problem with using testosterone levels as a marker of being a ‘man’ or a ‘woman’ is that while doping tests have acceptable ranges, each individual produces an amount that is unique to their body with age, mental and physical health playing a role in the determination of how much of the hormone their body is producing. The Journal of the American Medical Association states:

Gender verification has long been criticized by geneticists, endocrinologists and others in the medical community. One major problem [is] unfairly excluding women who had a birth defect involving gonads and external genitalia (ie. Psuedohermaphrodism)…A second problem is that only women, not men, [are] stigmatized by gender verification testing. Systematic follow-up [is] rarely available for female athletes “failing” the test, which often [is] performed under very public circumstances. Follow-up is crucial because the problem is not male impostors, but rather confusion caused by misunderstanding of male pseudohermaphroditism (Simpson et al, “Gender Verification in the Olympics”, JAMA vol.284,pp.1568-1569, 2000).

If Semenya is to be condemned because of her body producing more testosterone than considered ‘normal’, thereby creating what might be considered an unfair advantage in women’s events, then should all women who are tested on the higher apex of the acceptable range be penalized for having an unfair advantage over women who test in the lower range? Should not a person’s legs be measured to insure that they are all similar in length so that taller athletes do not have an advantage over those of shorter stature? Should athletes be issued psychological examinations before each race to see whether or not they are in eustress or distress so that all the athletes are on the same psychological level playing field? Should athletes of a certain age be only allowed to compete with same age groups? What about breast size – could the size of a breast be considered an unfair advantage as a smaller size would have less wind resistance or less bounce that could change the center of that athlete’s gravity to a lesser degree than a woman with larger breasts? If any athletic federation wants to show that all the athletes are on an even ground when it comes to competitions, then they have to do away with the individual and begin racing mass produced machines, which even then does not guarantee a ‘flat line’ of equality.

It comes down to the question of whether or not today’s women are truly as ‘disadvantaged’ in the requirements for sports in comparison to men. In the 1920’s Paavo Nurmi ran the mile in 4:12; in 1996 Sveltlana Masterkova ran the mile in 4:12. While seventy years may seem like a large gap in performance it has to be noted that while men competing in sport competitions has been seen as a ‘manly’ pursuit, women athletes have not been seen as competitors in any serious manner until the twentieth century. Even today there is a stigma that women athletes face – they have to be competitive but they also have to fit into the accepted media driven ideal of what feminine entails; they are to be Aphrodite reincarnates over Atlas clones. Is it truly a competition if the participants are limited by infantile stereotypes and preconceptions of what is ‘natural’? Is society so close minded that there has to be a delineation of men’s events, women’s events and other’s? Women are beginning to have access to similar training regimes as their maile counterparts. Once cosmetic and aesthetic stigmas are tossed to the side, women may be accepted by society as being able to have the bulges or ‘manly’ characteristics that will further erode the difference in performance expectations; perhaps then intersexed people will not be discriminated against as freaks or dirty little porn titillations and seen for the individuals that they are.

Winnie Madikizela-Mandela stated in an interview with a British Newspaper, “It is not her [Semenya’s] fault and I do not understand how anyone can blame this child for a biological problem that is not of her making…there is nothing wrong with being a hermaphrodite. It is God’s creation. She is God’s child. She did not make herself. God decided to make her that way and that can’t be held against her.” If it looks like a duck, it quacks like a duck then it is a duck. Caster Semenya is a woman; even if her clitoris has developed into a penis; the majority of her secondary sexual characteristics are that of the female gender. In a world where routinely both male and female athletes are being ‘caught’ enhancing their performance by taking steroids, why should an athlete whose body is producing them naturally be punished for what others are doing artificially in the back rooms?

Where do we draw the line between unfair advantage and unfair prejudice? Content writer, A.B. Thomas takes a hard look at the recent policies surrounding gold medal winner, Caster Semenya.

Attack of The Drones