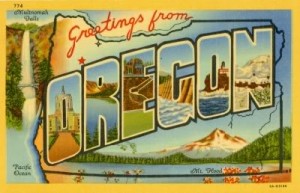 When BBC/America correspondent Adam Brookes decided to do a piece on America’s economy from an ‘everyman’ perspective, he chose the town of Bend, from my home state of Oregon.

Most of us who live in Oregon have known Bend as a thriving community which had modest beginnings in the cattle and timber trade. No less a publishing luminary as G.P. Putnam chose Bend, Oregon as the place to home his journalistic skills before taking the reins of the family publishing empire; the combination of dry climate (over 300 days of sunshine per year); four definable seasons (great summers and some of the best skiing in the world) and the clearest air in the West (the Bend area is home to a world-class astronomical observatory) consistently ranked the place as one the Best Places to Live in America, by almost any yardstick.

This all came crashing down during the recession.

The price of homes in Bend doubled during that time – something that was unsustainable – and with it came the construction of housing to accommodate the growing population.

As Brookes puts it, “In what had once been an isolated lumber and mill-town, high-end restaurants and brewhouses opened. Shops selling expensive bric-a-brac bloomed. Massage therapists and hairdressers proliferated.

When the credit markets collapsed, so did Bend. Home prices dropped by 40%, and the ‘official’ unemployment rate jumped to a staggering 17% – depression-level rates by most measures. (Note: The real rate is quite likely around 30%, if we consider not just those currently receiving benefits, but those for which benefits have run out, and those who simply quit looking.)

The story of Dan Hardt, a building-contractor in Bend, is typical. He owned a thriving business, hanging drywall in new homes – he had a crew of twenty, and the usual ‘toys’ (multiple homes, cars, a boat, etc.) which accompanied this success.

Now, he lives in a homeless shelter – his business ruined; his accomplishments gone.

That those who lived in this manner simply cannot cope is an understatement. An average of four suicides per week in Bend is mute testimony to the failure of the American economy; a bankruptcy-write-large of the ‘American dream’. It’s possible to build a life when things are stable – but today, all bets are off.

In Bend, at least, the ‘American dream’, is a failure; an abject nightmare leading to ruin, and death.

As Mr. Brookes points out, things are very different here. Lacking the culture of looking after each other, our social-services are limited in the extreme. In his article, he states, “When you lose your job in America, you will receive financial aid from the government. But it is limited. Typically, an unemployed worker in Bend will get state benefits for a period of six months to a year. After that, as many in Bend are discovering, you are on your own.

In addition, the loss of a job frequently means the loss of health insurance and payments into retirement funds. This limited social safety net means unemployment in America can be devastating.”

Or, as Dan Hardt puts it so well, “It’s not just the job that stops. Everything else stops with it.”

While it ought to be a time of backyard-grills and end-of-summer ‘activities’, in Bend this year Labor Day is going to be Poverty with a View; a return to Depression-era frugality and the certain knowledge that whatever comes after, things will never be as they were.

Bend, it would appear, is a microcosm of America, here on this Labor Day of 2009 – and we don’t look good to the rest of the world.

By Astra Navigo When BBC/America correspondent Adam Brookes decided to do a piece on America’s economy from an ‘everyman’ perspective, he chose the town of Bend, from my home state of Oregon. Most of us who live in Oregon have known Bend as a thriving community which had modest beginnings in the cattle and timber…

War On Another Front!

The Emergence of Homo Predicae