Attack of The Drones 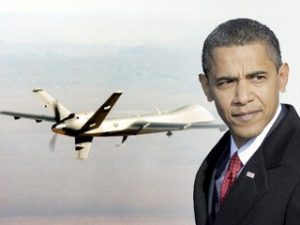 The hills surrounding the area of the Pakistan/Afghanistan border are seemingly desolate, but as many a journalist, lost traveler and border patrol guard will tell you they are far from unpopulated.  The hills and valleys provide the perfect protection for the blooming Opium industry and hiding spots without end for the insurgents chased out of Afghanistan by American, British and NATO troops.

This is a hotspot that nobody wants responsibility for and as a result it is a place where crime, punishment and the thin line between the two are so completely blurred it is hard to tell who is in the right.

In his address to the Pakistani people reported on by the BBC on Sept.14, 2009, Asif Ali Zardari Stated that this gray zone is un-patrolable without global support.  Further, he stated that while it is technically in his country and jurisdiction, he is unable to enforce law there.  This seems unreal given that he commands 700,000 troops that are well trained in this type of mountainous military action. However with the announcement on Sept 17, 2009 that U.S. President Barack Obama is considering more troops to the Afghanistan it becomes clearer that Asif Ali Zardari who has leaned in the direction of U.S. support is only waiting to see if the U.S. will clean house for him.    Pakistan is afraid, and not without good reason, they are caught between a rock and a hard place.  They seem content to lay low for now and see what the American led troops will do.

On Sept 17, 2009, Reuters reported that “A top al-Qaeda commander and a senior Uzbek militant linked to the international terror group are believed to have been killed in two separate U.S. drone attacks in northwestern Pakistan, said officials on Thursday.

Pakistani intelligence officials on condition of anonymity said they believe al-Qaeda commander Ilyas Kashmiri was killed in a U.S. drone attack on a compound in Pakistan’s North Waziristan region on 7th September, while senior Uzbek militant Kamolitdinovic Jalolov was killed in a similar U.S. strike near the border town of Mir Ali on 14th September.

Kashmiri, a Pakistani who had led Harkat-ul- Jihad Al-Islami’s (HuJI) operations in Indian-administered Jammu and Kashmir in early 1990s, was believed to the operations chief of the al-Qaeda in Pakistan.

Jalolov, also known as Yahyo, was the founder of an al-Qaeda-linked militant group called the Islamic Jihad Union, and was among the three top central Asian militant commanders affiliated to the al-Qaeda in Pakistan. His name appears on a U.S. Treasury list of individuals whose assets are blocked.”

With that it seems that America is still actively engaged in its “War on Terror” although you will not hear much of it from the President who seems to be focusing his energy on change at home.

Which leads me to question why this is not being better addressed here in the U.S.  Our President ran on the ticket of actively working to put an end to our troops being engaged overseas.   Yet seemingly we are doing anything but.

“The Obama Administration announced Thursday that it is revamping plans to build a missile defense system in Eastern Europe.

The plan for the missile defense system, originally enacted by former President George W. Bush, called for a radar system to be installed in the Czech Republic and for 10 ground-based missile interceptors to be based in Poland.

President Barack Obama said the new plan would be geared toward intercepting shorter-range missiles, which he said currently pose a greater threat to Europe.

The new plan would deploy the interceptors in areas closer to Iran starting in 2011, first at sea and then later on land in Northern and Southern Europe. The 2011 start date marks the beginning of phase one of the plan, with three more phases set to be implemented in 2015, 2018 and 2020.

“The best way to responsibly advance our security and the security of our allies is to deploy a missile defense system that best responds to the threats that we face and that utilizes technology that is both proven and cost-effective,” Obama said. “(RTT News)

Recent Updates suggest that planned missile sites have changed but not been abandoned.  After this piece was written it was reported that the land based missile program was changed to a more sea  based one probably in the area of Turkey, Romania and Israel as they were more “cost effective.”

Why is this not being talked about at home?  Why are we being deflected with plans for healthcare that seemingly are not even completely developed?

Another concerning trend is the increase in military advertizing for young people which had experienced a drop over the last couple of years.  In the last two months we have noticed an increase in spending, production and time slot allotment for these commercials which were the norm in the years following the 9/11 attack on American soil.  Parents of graduating seniors are noting an increase in phone calls to their homes from recruiters most times even after being told that their sons and daughters have no interest in military service.

Like any good magician, politicians have long employed tactics of distraction when trying to accomplish unpopular programs.  Which leads one to ask themselves, are the town hall brouhas  a way of distracting us from what’s going on in the rest of the world, and in particular our own employment of continued armed force?

What we have been missing in our country over the past couple of months while we have been domestically embroiled in Health Care and Right to marry issues is the full realization that we are still a country at war and our fronts are spreading.  This should be cause for concern.  It should also be cause for us to band together and do right by one another.  As we have all been taught a nation divided cannot stand.  We are so greatly divided on so many issues at this point and faced with a global political climate that could in fact be our downfall.  Do we really need to be bickering about health care or can we find it within ourselves to break out the super-glue needed in time to deal with some of the very real global issues that are facing us while we bicker amongst ourselves?

Walking Among the Homeless