When the Department of Defense Doesn’t Give Beds 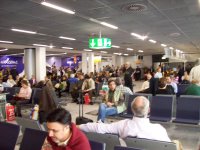 BERKELEY — Berkeley blogger Jane Stillwater is suing the federal government for the cost of an airplane ticket to Kuwait and the cost of 15 mocha lattes from the airport Starbucks, where she spent two sleepless days because her previously approved embed with the U.S. Army suddenly was canceled.


Stillwater, a 66-year-old grandmother, embedded with the U.S. military twice last year and has gone to Iraq to hang out with troops and blog twice since her Starbucks layover. But in February she had an experience that prompted her to take the U.S. Department of Defense to small claims court.

In Alameda County Superior Court on Jan. 9, she will try to recoup the $1,780 she spent on the plane trip, ground transportation and food during the failed mission. “Even though I will probably never be able to prove it, I sincerely think that I was denied access to an embed due to my progressive political beliefs,” she said. “And I also think that making some sort of stand in favor of equal access for all reporters to the flow of information in Iraq is important — not just to me but for journalists everywhere.”

It’s not clear whether the government knows about her claim.

Several high-ranking military officials did not respond to requests for comments about the canceled embed or the lawsuit. U.S. Army spokesman John “Paul” Boyce said in an e-mail that he had not “heard anything about this small claims lawsuit.”

Before filing in small claims court last month, Stillwater appealed to the Army for reimbursement for the failed trip. The Army told her she did not have valid grounds for a claim, according to copies of two letters sent by Col. John Hildebrand in Iraq, so she decided to take them to court.

Stillwater’s ordeal began nearly a year ago. On Jan. 18, she requested a journalistic embed with the U.S. Army’s Third Infantry from the U.S. Department of Defense’s Multi-National Force-Iraq division’s Combined Press Information Center in Baghdad.

Stillwater, who is not a trained journalist, had been able to embed with the military previously by securing press credentials with the help of a small Texas newspaper, The Lone Star Iconoclast. She also writes for the Web site OpEdNews.com.

W. Leon Smith, publisher of the Lone Star Iconoclast, said the newspaper sponsored Stillwater to obtain “firsthand and up-close information about the political, military and economic situations in those (Iraq) regions.”

“Like us at the Iconoclast, she is a truth-seeker. Her goal was to present what she saw and heard exactly as they were, without influence or favoritism, which I think she has accomplished,” Smith said in an e-mail. “Her reports have been insightful and useful, partially because she goes beyond the surface and digs for truth at the grass-roots, blood-and-guts level, which is where the real people reside. Her journalistic ethics are impeccable.”

While in Iraq, Stillwater has reported on things from the troops’ living conditions to the variety of Meals Ready-to-Eat to the day a suicide bomber blew up the Iraqi Parliament restaurant where earlier she had been interviewing two female Parliament members. She has written negatively about President George W. Bush and the war but favorably about the job U.S. soldiers are doing in Iraq.

On Jan. 19, according to a copy of an e-mail from Spc. James Deady, a media embed coordinator with the press information center, she was granted the embed. “Jane Stillwater, Congratulations! You’ve been approved for (an embed) from Feb. 14, 2008, to March 3, 2008. Please let us know your travel plans so we can prepare for your arrival.”

Stillwater immediately bought a $1,163 plane ticket to Kuwait, but was told later that day that she would not be embedded due to “changes on the battlefield” and “limited resources to support embeds,” according to copies of two e-mails to Stillwater from military officials.

Not easily deterred — she has traveled in North Korea, sub-Saharan Africa and Iran — Stillwater asked them to reconsider. She told them about her successful embeds in Al Ambar with the Marines in October 2007 and how she received a letter of commendation from a major general, a regiment challenge coin from a colonel, and a battalion challenge coin from a lieutenant colonel. Coins represent affiliation, support or patronage to the organization minted on the coin.

She told of her familiarity with combat and her time spent without problems in Iraq’s Hit and Haditha. The military officials didn’t budge but came up with a new reason for the denial: She didn’t have enough readers.

“The main reasoning behind the final decision is the low circulation of your work compared to military expense,” according to an e-mail from Spc. Embed Coordinator Savanah Alas-Ruiz.

Stillwater’s pieces appear on her blog and on the Web site OpEdNews, which according to an e-mail from editor Rob Kall has 700,000 unique visitors in 200 countries each month.

Stillwater appealed to a contact at the Pentagon she knew from earlier embeds; to Rep. Barbara Lee, D-Oakland; and to news reporters.

But she packed her bags — only to be lost in transition — and flew into the Kuwait International Airport. She was holding out hope that the military would reconsider. They didn’t, so she spent two days and a night drinking mochas on a love seat in the airport Starbucks, a meeting spot for journalists, soldiers and contractors. She had little money, no credit card and needed to have wireless Internet access in case a military e-mail arrived.

“I was there on a total shoestring,” she said during an interview in her subsidized Berkeley apartment. Finally, tired, broke and hungry, she went to the U.S. Embassy, which arranged for an earlier flight back to the Bay Area.

She said she might have forgiven the Army for the airport episode if Army officials had stuck to their story about the reason behind the cancellation. But they didn’t, and that made her mad. Really mad.

She’ll be back in court next month but doubts the government will come through with the money. “I bet you anything that if Judge Judy was hearing my case, the Department of Defense would be getting a serious earful on how to play well with others,” she said.

By Kristin Bender BERKELEY — Berkeley blogger Jane Stillwater is suing the federal government for the cost of an airplane ticket to Kuwait and the cost of 15 mocha lattes from the airport Starbucks, where she spent two sleepless days because her previously approved embed with the U.S. Army suddenly was canceled. Stillwater, a 66-year-old…

Cracks in the Child Welfare System

Why Canada’s Recession Rate is Slower