Dangerous weapons: Why airport security is a joke 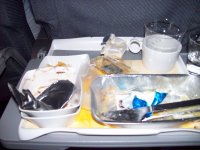 In the last eight years, Bush, Cheney and a Republican-dominated Congress appear to have wrecked inestimable havoc on America’s basic economics and laws.

From wiretapping US citizens, torturing foreigners, handing over our treasury to Wall Street insiders and grub-staking war profiteers by lying about WMDs to ruining our school systems, ignoring our roads and turning our judicial system into a good-ole-boys’ club, these top-of-the-line miscreants appear to have systematically weakened almost everything American about America.
In the past eight years, Bush and his colleagues have master-minded, invented, implemented and perpetrated so many different ways to undercut our nation that it has become a stirring tribute to the solidness of America’s basic morality, economy and infrastructure itself that our country has managed to last even as long as it has under this continual rain of blows to its economic, cultural, patriotic and Constitutional solar plexus and heart.
From the “Let it happen” lack of preparedness before 9-11 to the merciless bombing of women and children in foreign lands, the systematic weakening of FEMA prior to Katrina, the theft of millions of American votes, the blatant sell-a-thon of our national parks’ resources and the out-and-out looting of our national treasury, these carpetbaggers have committed so many crimes that it’s a wonder that most of them aren’t already in jail.
“But, Jane,” you might say, “with regards to all the neo-cons’ crimes, you’re just throwing around a load of vague generalizations here — not backed up by proof.  Could you please be more specific?”  Sure.  But then I’d have to clutter up this entire article with millions of pages of back-up documentation and it’s not gonna be any fun having to read all that fine print.  So let’s just
suffice it to say that Bush and them have committed enough crimes against the American people to get themselves noticed bigtime — as evidenced by how Americans voted this November.
Americans are tired of being played for suckers, rubes and stooges and, with the possible exception of some out-of-touch diehards in the Red states who don’t have internet access and are forced to rely on Fox News, most of us have pretty much wised up to most of Bush’s nefarious schemes.
But is yours truly the only one in America today who has spotted the airport security scam?
Hours and hours and hours have been stolen from my life forever while waiting in line at airport security checkpoints.  They’ve taken my bottled water.  They’ve taken my fingernail clippers.  They’ve searched my person.  They’ve irradiated my food.  They’ve x-rayed my shoes.  Since 9-11, billions of taxpayers’ dollars have been spent on making sure that millions of passengers haven’t brought any dangerous weapons onto commercial airplanes.
So.  You spend an hour going through airport security, get onto your plane, find your seat and settle in.  And then what is the very first thing that the stewardess hands you once you have taken your seat?  A sharp metal knife!
I kid you not.
After your plane has been in the air for a while and reached cruising altitude, the freaking stewardess herself proceeds to march up and down the aisles of your plane — and systematically supply every man, woman and child on your flight with a six-inch-long metal blade!
PS:  Is Joe Lieberman still the chairman of the Senate Committee on Homeland Security?  And if so, WHY?
If the good Senator had been taking commercial airline flights in the last few years instead of traveling around on the Straight Talk Express, he would have spotted this glaring weakness in America’s airport security system immediately and rectified it right away, giving airline passengers harmless box-cutters to cut up their rubber chicken with — instead of the more dangerous blades that the airlines are currently arming passengers with.
Wouldn’t he have?

By Jane Stillwater In the last eight years, Bush, Cheney and a Republican-dominated Congress appear to have wrecked inestimable havoc on America’s basic economics and laws. From wiretapping US citizens, torturing foreigners, handing over our treasury to Wall Street insiders and grub-staking war profiteers by lying about WMDs to ruining our school systems, ignoring our roads and turning our judicial…

When Deja Vu is no Better than Hind Sight