Damnation: The Psychology of the Consumerist Age of Debt 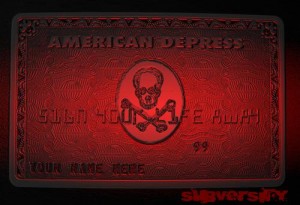 It is perhaps cliché to say that Americans have a debt problem. With a variety of media focusing on the topic, one might even say that the debt warnings have become so routine that it has lost resonation among the people who need to hear it most. As the U.S. Government now struggles with the rapidly disintegrating credit markets, the citizens are facing a future of astronomically high debt and rapidly declining employment. According to the Federal Reserve’s Survey of Consumer Finances, as of the second quarter 2008, average household debt payments are 18.83% of household income. 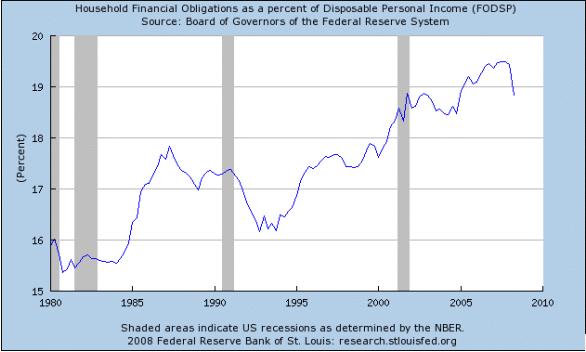 The ratio of debt to income is also at a record high, indicating that people – more than ever, are relying on debt as a method of payment. A more troubling statistic is the inverse relationship to the debt trend, with Americans saving with decreased amounts.

How did Americans find themselves in such dire straights? One answer might be a simple as opening up the mail. The explosion in the consumer finance business has led to the average American being assaulted with heaps of mail soliciting low interest accounts. In the 50 short years since the inception of the Diners Club, the competition in the lucrative consumer credit market has escalated to thousands of companies soliciting their credit lines.  The Direct Marketing Association reports that credit institutions spend 13.4 billion dollars in direct marketing and has the largest return on investment of any direct market solicitation at $13.37 per dollar. The business motive appears to be simple: solicit as much debt as possible and profit from interest payments. As competition has grown in the industry, companies began dropping interests rates and payment terms to capture market share from competitors.

Research has shown patterns of behavior among credit card consumers, which coincidentally end up being profitable for the credit card companies. Research by Dr.Neil Stewart at the University of Warwick has shown that the mere existence of a minimum payment creates a correlation in behavior on paying just the minimum, which ultimately ends up being more profitable for the credit company. Robert Frank, a researcher from Cornell recently stated on NPR “When McDonald’s started allowing credit card purchases, the average purchase went from $4.50 up to $7.00.” Frank’s book, Luxury Fever, investigates the psychology of families that refuse to forgo spending in an effort to maintain a perception of a lifestyle accepted as socially normal.  The spending is not a vehicle of necessity, but a tool for facilitating desire. Wharton professor Nicholas S. Souleles studied borrowers reactions when lenders increased the credit caps on customer credit card accounts. Those who appraoched their credit maximum quickly used much of the additional credit extended to them. But within six months of the credit increase, he found, even cardholders with credit to spare carry bigger balances.

Across the country, most major department stores now solicit lines of credit for making purchases. One can purchase premium appliances for thousands of dollars with no money down and no interest for a limited time.  As the store facilitates the credit, its in their best interest to have their customers purchase big ticket items to profit from both the sticker price and interest derived on long payment plans.  Many department stores now display the monthly payment on their big-ticket merchandise as a method of upselling customers. Financing is often prominently displayed to facilitate confidence in customers that purchases can be made if they lack the funds.

The days of saving for purchases have long past, America is an economy of debt. The retail and financial sectors have modified their business practices to facilitate debt spending in order to increase revenue. As household debt continues to skyrocket, one is left to wonder at what point the system can continue to sustain providing consumers with unlimited amounts of credit. With the economy falling into an abyss and houshold debt levels at historic highs,  the long term stability of this young debt economy will surely be tested . 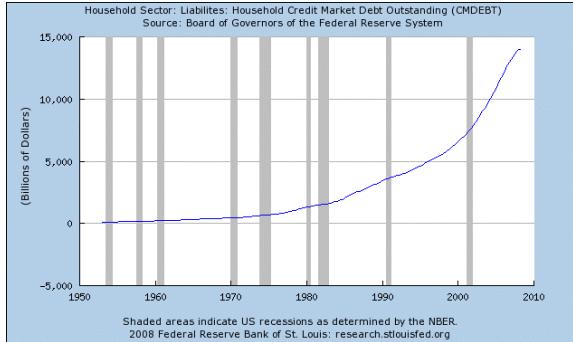 See The Horrors of the Credit and Banking Failures

With the economy falling into an abyss and houshold debt levels at historic highs, the long term stability of this young debt economy will surely be tested .

The United States of Zombies

Media Bias in the McCampaign