Have a Bankrupt Holiday 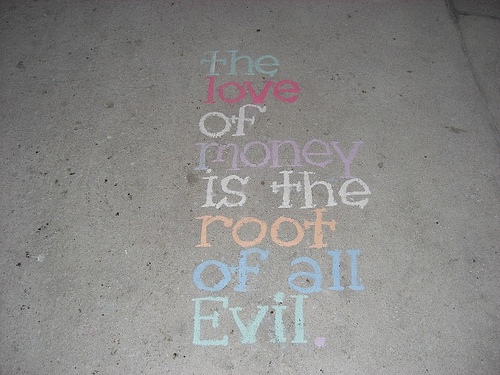 In that sublime month of fall, when we should in fact be preparing ourselves for what will most likely be a very harsh winter, we cultivate our children for the first step in the give me process. I’m not exactly sure how Halloween graduated from All Hollow’s Eve, which wasn’t quite a celebration of the day of the dead, but rather a precaution taken so any evil minded spirits would not haunt them for the rest of the year. The idea was that through masks, disguises and offerings, we’d somehow appease angry spirits and lure some blessings from our ancestors. I’m not one to squabble with my ancestors. If this is what they feel they are entitled to in order to receive eternal rest, I’ll be most obliged to place paint on my face and dance around like a phantom. However, so far none of them have come forward to demand that I pay tribute. Instead, I have eighty-five small, neighborhood children, trained to obnoxiously knock on your door each year and demand that you give them candy. To make matters worse, there are fifty-five older children who outgrew their ability to look cute while endorsing early childhood diabetes, so have limited their selections to simply playing tricks. Some of these tricks, including the soaped windows and the toilet paper in the trees, would be considered vandalism, but on Halloween, it’s just the kids out having fun.

I don’t think it’s a co-incidence September marks not only the collapse of the World Trade Center, but the downfall of our financial institutions. We’re instilled with fifty years of conditioning in preparing ourselves for a spending frenzy beginning with the entitlement demands of our children. They are entitled to have the best costumes in town, acquire the most sugary treats so as to run up their parents’ dental bill, attend five different parties; each one louder and more reckless than the last, until they finally throw up from the excitement and go home. If any ghosts, ghouls, spirits or other residents of the nether world have been resurrected by this elaborate display of fiendish delights, I believe they must be the banal spirits of stock brokers, tax consultants and corporate lawyers, awakened from the grave to possess young minds innocently masked to represent ballerinas and super heroes.

By the time the big bag of loot has dwindled down to the few last miserable pieces of hard, red and white striped peppermints, our expanding little princesses and wonder boys are encouraged to gorge themselves again on a table full of food that any reasonable household would cautiously divide up to last a week. Perversely, while we are watching family members devour the savings of an entire summer of hard work, we are somehow supposed to be thankful we could be so foolishly lavish.

Before the last Thanksgiving dinner plate is washed, it’s Christmas. Another round of feasting and indulgence, matched out credit cards, and a glut of extra shirts, ties, gadgets, toys, tools and housewares we don’t really need. Overweight and broke, we breathe a sigh of relief that we have at least fulfilled our obligations to society. Our children have learned the art of begging and coercion. They’ve been indoctrinated into the notion of entitlement. There’s just one lesson left for them to learn. After the feast, comes famine.

By Sergio Impleton In that sublime month of fall, when we should in fact be preparing ourselves for what will most likely be a very harsh winter, we cultivate our children for the first step in the give me process. I’m not exactly sure how Halloween graduated from All Hollow’s Eve, which wasn’t quite a…