No Country For Dead Dogs 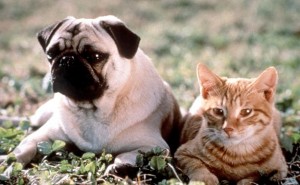 “No Country For Dead Dogs”

by The Late Mitchell Warren (who was also snuffed)

“There’s nothing more depressing in film than a dead dog. Perhaps one of the most painful scenes in the Best Picture winner No Country For Old Men was when the dogs got the fatal shot, first anonymously by Anton Chigurh & Friends and then by Llewelyn Moss. It is unpleasant to see dogs murdered on screen, though we seem to have no problem seeing humans get dismembered and disemboweled all in good fun. Therefore one of the persistent urban legends to discuss, and one that SNOPES still hasn’t bothered investigating, is that of the 1986 children’s film The Adventures of Milo and Otis.

Urban legend has it that The Adventures of Milo and Otis, starring some adorable animals and the annoying voice of the late Dudley Moore, could have wasted as many as 30 cats and dogs off-screen, while presenting only the most convincing video evidence that cats, dogs, bears, beavers, seagulls and crabs all get along fabulously. Of course, we have no way of knowing this based only on video evidence, as the film cut is always compiled from hours of footage that has usually been filmed according to convenience, not sequential story telling. Therefore my first thought while watching The Adventures of Milo and Otis all these years later was, given the fact that the final cut shows actual footage of cats falling down waterfalls and getting wet, dogs getting pinched in the nose by crabs and bears laying the smackdown on some smaller animals. If we take the movie’s word for it, we believe that all animals have a general playful spirit. Truth be told, in order for any bear to be safely videotaped by a camera crew while it frolicked with cats and dogs, it would have to have been a domesticated creature. To me, the question is not so much was The Adventures of Milo and Otis a glorified nature film falsely presented as a children’s film, because it’s obvious these animals were specially trained and civilized enough to play together in relative piece. However, what remains unsettling is just how far filmmakers could have gone to get proper reaction shots. Consider the facts before making your final call on this Brokeback Mountain of cuddly animal films.

FACT #1: There is no official disclaimer stating, “No animals were injured in the making of this film.” Instead Columbia Studios released a statement attempting to mollify the suspicions of others while admitting nothing, in reaction to questions raised by The Toronto Star and other newspapers. “All the scenes…may be momentarily unsettling for young viewers, but it’s comforting to see in the closing credits that ‘the animals used were filmed under strict supervision with the utmost care for their safety and well-being.'”

FACT #2: There were no visual effects used in The Adventures of Milo and Otis at least not the type of visual effects that we take for granted in movies like Babe. Therefore any footage you see of a cat falling into a waterfall or swimming for its life is legitimate. The only possibility in terms of visual effects is that a dummy animal was used during some of the more potentially dangerous scenes. All we know officially about the film is that were 400,000 feet of footage shot over a period of four years for the making of The Adventures of Milo and Otis.

FACT #3: The film was made in Japan and originally released as Koneko Monogatari: The Adventures of Chatran. Therefore, whatever our American preferences regarding animal cruelty are or were in 1986, Japan was not in the least bit concerned. However, there were rumors of Japan’s own animal rights groups protesting the film, at least according to TheCulturalGutter.com website, which quotes The UK Economist Magazine, which implied there is no way a cat could survive some of the “stunts” seen on screen. Allegedly, The Economist also stated according to reports coming out of Japan that a third of the 30 Milos used did not survive the film.

Unfortunately, beyond direct quotations, much of what we read is hearsay. There are believable reports that suggest director-writer Masanori Hata was a zoologist and the owner of an animal farm. (This suggests good news, and we may figure surely a zoologist would not subject animals to cruelty) It is also a fact that the original Japanese film was 90 minutes long and was re-cut to 75 minutes for the American release. Allegedly, the original film had some violent scenes and was geared towards a more adult audience. However, no hard proof of this could be found–and unfortunately, I do not read Japanese and cannot investigate all the Koneko Monogatari references online.

TheCulturalGutter.com’s published article implied that the American Humane Society stated that as many as 27 cats were killed in the making of the movie. However, contrary to that allegation the American Humane Society chooses to say nothing about The Adventures of Milo and Otis, even removing it totally from its “Reviews” section (http://www.ahafilm.info/movies/movieratings.phtml?letter=&page=4) where other animal-starring films (and foreign films) are actually labeled as “unknown” for their safety practices. This is quite possibly due to the fact that much of The Adventures of Milo and Otis snuff speculation is just that: speculation.

I, like the American Humane Society, refrain from forming an official stance because of a lack of evidence. However, I would say that at best, some animals were probably injured in the making of the movie, as the disclaimer certainly implies and film evidence shows. (A crab pinching a dog’s nose has got to hurt!) My final thought is that Koneko Monogatari, even if it did feature the accidental death of animals, is no guiltier of murder than any “snuff” footage on the Discovery Channel where we see animals mauled and torn apart all in the name of education. All that director Masanori Hata did was literally reinforce the notion that Hitchcock once taught, that suggests all actors are cattle, and staged some scenes for the glorification of the camera. (Hey, the best of your reality TV shows do it!) I would blame Columbia Studios, if anyone, for their insistence that anything internationally popular can be dumbed down for an American audience.

Whether the fear written in Milo and Otis’ face is real or just brilliantly acted remains a SNOPE to be investigated. (Which I can assure they were recently alerted to investigate) All you can truly say is that Milo’s meowing performance was far more convincing than Andy Samberg and company in Hot Rod. I think the only real injustice is that Milo and Otis were severely underpaid for their method acting.

Hollywood Urban Legend #1130: Milo and Otis were the victims of a snuff film. That’s right, your childhood is now tainted.

The Resurrection of Harvey Milk